The Superstition Mountains to the east of Phoenix, AZ reportedly hold a legendary motherlode of gold known as the Lost Dutchman Gold Mine. Through the years, truth and fiction about this mine have been irrevokably mixed up, producing 62 varieties of the legend. Before we get into those, here are some genuine facts about the Lost Dutchman Gold Mine:

There really was a Lost Dutchman, although he wasn’t Dutch. Jakob Waltz was nicknamed Dutch (i.e. from the Netherlands) because he was Deutsch (i.e. from Germany; a common error, see also ‘Pennsylvania Dutch’). A man of that name was born in Württemberg in 1810 and emigrated to the U.S. From the 1860s onward, he homesteaded in Arizona, pursuing mining and prospecting as a hobby – a quite unsuccessful one.  Waltz fell ill and died in 1891, but not before revealing the location of an alleged gold mine to Julia Thomas, the neighbour who cared for him. As early as Sept 1, 1892, a local newspaper relates how Thomas and others were trying to locate the mine. When they failed, it is reported they sold copies of a map for $7 each. After about a decade, the story sank into obscurity, regaining notoriety when it had acquired more spectacular aspects, in a fashion not dissimilar to a game of Chinese whispers.

The Lost Dutchman Mine is the most famous in American history. Quite literally so, according to Southwestern Folklore author and researcher Byrd Granger. In 1977, Granger noted that the Lost Dutchman story was printed at least 6 times more often than the story of Captain Kidd’s lost treasure or the story of the Lost Pegleg Mine in California.

The Lost Dutchman Mine is also the most sought after in American history. Attempts have been made to locate it at least since 1892. Some 8,000 people each year try to find it. And not just crackpots: former attorney general of Arizona Bob Corbin was one of the many mine-seekers.

Granger distinguished three main elements to the story, with the most complete version of the story incorporating all three legends. He argued that each of these three legends contains some truth, but have become badly distorted through time. The legend continues to evolve: recent additions are versions in which the gold is really a secret treasure trove of the Knights of the Golden Circle, a Confederate secret society active during the American Civil War (1861-1864). 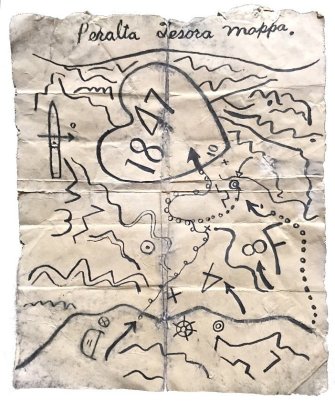 A cryptic map of the gold mine, or just a fake?

True or not, the legend of the Lost Dutchman’s Gold Mine continues to fascinate the public. This post card is a humourous version of the many serious treasure maps that undoubtedly circulated in Arizona and environs at the height of gold mine fever, at the end of the 19th century.

Donate a kidney now, and your loved one will have priority status if they need one later.
Thinking

Objective reality exists, but what can you know about it that isn't subjective. According to some neuroscientists, not much.
Up Next
Strange Maps