The rising tide of evil, the relative safety of a few sanctuaries: these are the two main vectors of zombie cartography.

In the first category, the epidemiological map shows the outbreak and spread of the disease. But unlike John Snow’s famous cholera map [1], there is nothing even remotely remedial about it. Nor does it share the patronisingly reassuring undertone of most actual disease maps. Its purpose is to alarm and horrify the map reader. 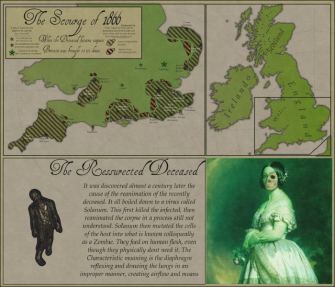 In the second category, the survivalist map, mapping the disease has become pointless: it’s everywhere. Political borders too have become irrelevant. The world is now divided into zombies and survivors – with the latter clinging together and falling apart in neo-tribal alliances. They have the claustrophobic feel of an escape route plotted through an infested area.

The zombie genre is arguably the most popular branch of science fiction of the first decade and a half of the 21st century, as mainstream as the UFOs and aliens popularised in the 1990s by The X-Files.

As a dystopian sub-genre of SF, Z fiction shares its main characteristic: it spins scientific fact into improbable tales of horror and suspense. But unlike most SF, books and movies about zombies are usually not set in the future, either distant or near. Your typical Z narrative takes place in the now – albeit an alternate now, engineered to differ from our own present in two complimentary ways: pre-outbreak, zombies are as absent from popular culture as they are ubiquitous in public space, post-outbreak. 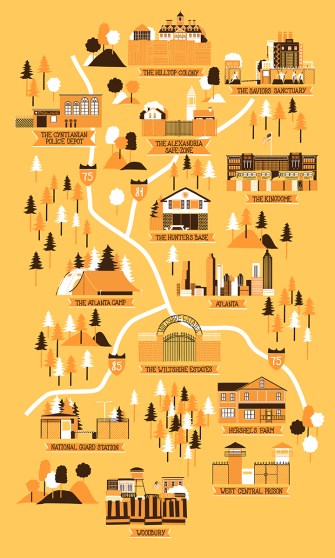 The contemporary setting of zombie fiction lends an urgency to its subliminal message.The societies described in SF show us the promise and threat of our possible tomorrows; Z literature and movies are about this society, here and now – a world already gone to hell, in a state of living death.

To find the reason for our obsession with zombies, go to Detroit. Few places resemble Z world as much as those parts of Motor City between the struggling downtown, and the rich suburbs beyond 8 Mile Road. Whole neighbourhoods look like war zones, a mess of burnt-out houses and blocks that have reverted back to nature, sprinkled with a few residences kept up like it’s still 1955, and all is well with the world [2].

Zombie fiction is the acceptable expression of middle-class fear of the poor, huddled masses trapped in these post-industrial wastelands: as they aimlessly stand on corners, shuffle along streets with a broken gait or stare at passing motorists from their front porches, they generate the sense of unease and threat that feeds our obsession with zombies. What if they escape from those no-go zones, and take over the world?

To be sure, the real-world solution to urban destitution and despair would be a war on poverty, not on the poor. But improving education and public transport, offering social services and creating jobs don’t figure in zombie movies quite as much as axe-blows to the head.

Zombies have the great advantage – from an action-movie point of view – that they lack even the most basic building blocks of the human condition: a point of view, a sense of self, the desire for self-improvement. Their only skill is the ability to flock, their only motivation the unwavering desire to feed on your flesh. It is impossible to empathise with them, or even to negotiate about sharing resources or staying out of each others’ way. They are automatically evil.

Which makes the uninfected humans – and by extension the readers and viewers who identify with them – the Good Guys. These hunted few must live by their wits, quickly learning how to forage and run in a world now dominated by zombies. 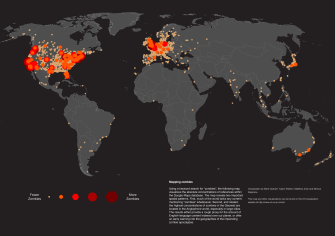 Zombie map not showing outbreak, but mentions of the word ‘zombie’. How meta is that?

Danger lurks everywhere. Safety is only found in secure compounds, locked away from the grisly outdoors. Sadly, for many in the so-called ‘Free World’ that already seems to be the default attitude to the world beyond their control [3].

Many thanks to Robert Farkas, who made and sent in the Walking Dead map (the non-Google Maps one). Thanks also to Alex Meerovich and Laura Wenham, who sent in the map for the 1866 outbreak, found here on io9. The last map, showing an epidemic of mentions of the word zombie, taken here from the Oxford Internet Institute at the University of Oxford.

[1]Mapping the cholera outbreak in London’s Soho district in 1854 allowed Dr. Snow to trace its origins to the water pump at Broad Street. This not only disproved the theory that cholera was an airborne disease, but by removing the pump handle, Snow effectively halted the epidemic.

[2] The place looks so much like Zombieland already that some locals are actually proposing to gate off a few blocks and make a theme park out of it.

The Little Sombrero in Pegasus

Viewed in silhouette, Sombrero and Little Sombrero both have large central bulges along with thin disks and dust lanes.