If you think that trawling the internet for cartography is a harmless endeavour, you are sorely mistaken. Think again. If you still can, that is.

The relentless perusal of maps – one more, and then another, but never the last one – is a perversion of the normal requirement in healthy individuals for spatial positioning.

Instead of going outside, taking in the fresh air of the real world, and interacting with the length and breadth of an actual landscape, so-called map-heads stay indoors, wedging themselves in stuffy rooms, to scan atlases for lurid cartography, or flick through websites for fringe maps, all to satisfy their marginal urges!

This perversion has dire consequences for one’s physical and spiritual health.

How sad! Here be monsters indeed. For these sins against normality are not without punishment. Horrible cranial disfigurement is one possible consequence of sustained cartophilia – usually commensurate with the type of cartographical projection preferred by the patient. 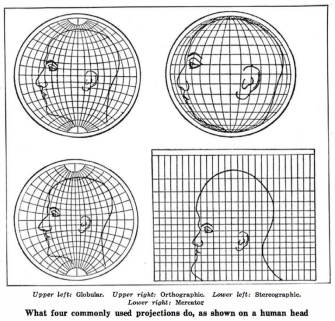 If he or she (but let’s face it, usually a he) is lucky, that projection is the globular one. The subject’s head is nearly normal, and only slightly pinched at the front and back of the skull. Occasionally, when the subject ventures out to buy another atlas, there will be shouts on the street like: Hey! Aren’t you Austin Powers’ dad? Being a map-head, the subject is used to a lot worse abuse than that.

But it takes only a slight predilection for orthographic maps to end up with a pinhead like the one in the upper right corner of this image. Not only does this lead to a dramatic contraction of the cranial area, plus a severe reduction in mental facilities, it also doubles the ears in size, leaving the brain with much more audio input than it can process.

It could be argued that the deformation caused by the stereographic deviancy (lower left corner) is the lesser of the four evils; except that it makes you look like Bashar al-Assad’s twin brother. Which is not an ideal mug to have to carry around these days, either inside or outside Syria.

Perhaps the lesser of all evils is the Mercatorhead, shown bottom right. Yes, the inflated chin and ballooning skull will frighten children, and perhaps even put some pets to flight. But a this will provide the patient with a lot more alone-time, and consequently with a lot more opportunity to fill that big old head with a lot more maps.

However, a vicious circle of Mercatorial map-consumption and cranial growth will eventually cause the subject to outgrow his stuffy room, but too big to leave through the door or window. The consequences are nasty, and usually require expensive redecoration of said room.

So help us stop map abuse! If you know someone neglecting normal outdoor activities in order to indulge in cartography, have the courage to break the chain of addiction. Tell them: Life is more than maps! Real life is better than maps!

A conservator from the Rijksmuseum explains how to confirm whether a painting is a genuine Rembrandt.
Up Next

I learned about last week’s fire in Seaside Park through a conspiracy theory. It read simply: ‘And I’m sure this was an accident.’ Given Jersey’s long history of questionable accidents—just […]