If so, a lot more of Yosemite is going to smell like that in the years to come. The so-called Rim Fire is currently consuming vast tracts of Yosemite and other parts of California’s Sierra Nevada. Starting on August 17, the biggest wildfire in recent memory has already destroyed close to 250 sq. mi (650 km2).

The fire got its name from a lookout point called the Rim of the World in Stanislaus National Forest, close to where it started. From there, it spread north toward Tuolumne City and east toward Yosemite National Park.

The size of this wildfire – about 15% contained by August 27 – is causing problems on an unprecedented scale. Not only is access to several nearby forests restricted to firefighters, and several residential areas evacuated, but smoke is affecting air quality in places as far away as Reno, Nevada and fire is threatening power and water supplies to San Francisco and the Bay Area.

While the Rim Fire is the largest wildfire currently raging in the American West, it is by no means the only one. The USDA Forest Service Active Fire Mapping Program is showing 38 current large incidents as of 26 August, 10 of which are in California, 9 in Idaho, 6 in Oregon, 3 each in Montana and Washington, 2 each Wyoming and Texas, and one each in Nevada, Utah and Alaska.

With wildfires a phenomenon of such scale, it is hardly surprising that each fire gets its own name, like hurricanes. The one currently raging in Alaska (and about 19% contained) is called, incongruously, the Mississippi Fire, while one just north of the Rim Fire was name-tagged American. A fire that has consumed about 1,000 acres by now in Idaho is called… Incendiary Creek Fire, hinting at the recurring nature of the wildfires in the American West. 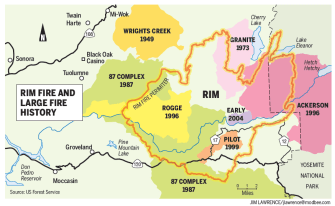 As does this map. It shows in a burning orange-and-yellow line, the current extent of the Rim Fire. It also shows, in coloured areas, the devastation wreaked by previous fires, many of them overlapping with the current fiery apocalypse.

“This points to the harsh reality of living, working and playing in the foothills and mountains: forests that burned before and are burning now someday will burn again”, writes Jeff Jardine in his column for the Modesto Bee, which he illustrated with this map, produced by Jerry Snyder of the U.S. Forest Service in Sonora, showing where the Rim Fire touches areas burnt by previous major blazes.

To Jardine, many of those fires are like old (albeit rather nasty) acquaintances: “[T]he Granite fire area […] became a moonscape 40 years ago and still bears some remnants: charred stumps and an area brought back to life through reforestation efforts. […] The 146,000-acre Stanislaus Complex fire in 1987 […] ranks 11th among California’s top 20 wildfires by acreage. The Rim fire has them all beat when it comes to devastation. By the time this fire-breathing dragon has been slain, it will have overlapped the perimeter of virtually every major fire in the region since [the 25,000-acre Wright’s Creek Fire in] 1949″.

Out west, seasonal forest fires are nothing new. As one of the commenters to Mr. Jardine’s column reflects: “Family stories passed down from my great-grandmother [recall] the Digger Indians […] burn the underbrush of the forest as they retreated to Nevada. Fall rains would eventually put them out. Forest management by people [who] understood nature and never went to school!”

These days, forests are managed by the Department of Agriculture, and the object of constant arguments over how they should be managed – exploited for their resources, left alone to their own devices, or somewhere in between: benevolently monitored and tweaked by human oversight.

Says Jardine: “View the area via satellite mapping and you’ll also see a checkerboard of areas that were clear-cut harvested bordered by areas of lush forest — at least until an updated satellite image reflects the ongoing destruction. Environmentalists claim logging operations are destructive. Some argue that until a couple of centuries ago, such fires eventually burned themselves out and were good for the environment. Fires? They don’t concern themselves with political and philosophical differences. They just burn whatever gets in their way”.

The area destroyed by the Granite Fire, Mr. Jardine mentions, has bounced back nicely from the wasteland it was in 1973. And so have other areas coloured in on this map. Until the Rim Fire, that is. But it’s all part of the great, terrifying circle of life in this part of the world: “They’ll become places of beauty and serenity again. They’ll also become fuel for another colossal fire someday”.

Many thanks to Justin Watt for sending in the map, which he shows here on his blog, Justinsomnia. It was prepared for the Modesto Bee by Jim Lawrence, based on US Forest Service data. Jeff Jardine’s column on the Rim Fire can be read here in the Modesto Bee.

Why Cities No Longer Want to Host the Olympics

The three cities chosen by the IOC as finalists for the 2020 Games—Madrid, Istanbul, and Tokyo—are facing an unprecedented wave of internal opposition.