Maybe you’ve never heard of Emmaland or Sophialand, but if you’re reading this in the United States, there’s a better than 90% chance that you live in either one of these two curious nations.

The former is made up of the 31 states where ‘Emma’ was the most popular baby name for girls in 2012. In spite of that institutional majority, another girl’s name proved more popular nationwide. ‘Sophia’ also came out ahead in 16 states, including America’s three most populous ones [1].

Last year, a total of 20,791 Emmas were born in the United States. The size of that cohort [2] was only surpassed by the 22,158 Sophias added to the US population in 2012. Together, both names came out on top in 47 of the 50 states. The exceptions were Florida, where baby girls were most likely to be named Isabella (#3 nationwide); Idaho, where new parents preferred Olivia for their girls (#4 overall); and Vermont, where new parents favoured Ava for their newborn daughters (#5 in the national ranking).

Few aspects of anthrophonomastics [3] are as eagerly discussed as the names people give their children. Perhaps because few acts are as simultaneously intimate and public: the name you give your child reveals something of the hopes and ambitions you have for your progeny, not to mention the tastes and traditions you inherited from your forebears.

In the last half century, baby-naming has become a lot more agonising. Until the mid-20th century, the popularity of baby names was less prone to variation and fluctuation. Fitting in was a greater priority than standing out: if you weren’t named after a family member of a previous generation (often your godfather and/or godmother), you were still most likely stuck with a name from a canonical list of biblical and classical names.

Not only do today’s champions reign shorter, they’re also not nearly as popular as yesterday’s pop queens. In 1961, the last year of Mary’s reign, over 47,000 girls of that name were born in the United States. In 2011, the first year of the current champion, less than 22,000 Sophias were born. The erosion of the top spot’s popularity [4] reflects the trend from conformity to individuality.

It might be true that yesterday’s staples are tomorrow’s classics, but the numbers indicate that it’s still too early for Mary to make a comeback. After losing the top spot in 1962, the name lingered in the top 10 until 1972, consistently sinking lower each year to #123 in 2012. It’ll be a while still before Mary will have sunk low enough to achieve that new-name smell indispensable for success. 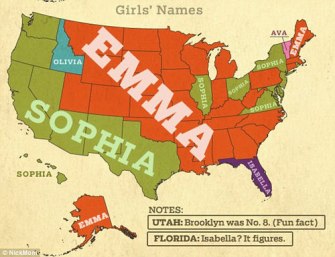 These and other trends, whether equally consistent or more remarkably volatile, make the annual release of last year’s most popular baby names a recurring conversational favourite, both in the US and in other countries [5]. But, in the US at least, those trends also have a remarkable geographic component.

Considering the top names for girls per state, we see two distinct blocks emerging: Sophialand is anchored on the West Coast, with 7 of its 16 states forming a contiguous [6] territory, from Washington State all the way down to Texas. Its giant next-door neighbour Emmaland occupies a gigantic swathe of land across the west, ranging unimpeded into Pennsylvania. A few mutual enclaves and exclaves [7] complicate the situation in the Midwestern to Northeastern area: there are four Sophia-enclaves (Illinois, Ohio, Rhode Island and a complex of 5 contiguous states: New York, New Jersey, Delaware, Maryland and Virginia). All the Emma states are contiguous, except for Emmaland’s New England province: Maine, New Hampshire, Massachusetts, and Connecticut. The US’s two non-contiguous states each declare for either of the main nations: Alaska is Emmaland, Hawaii is Sophialand. 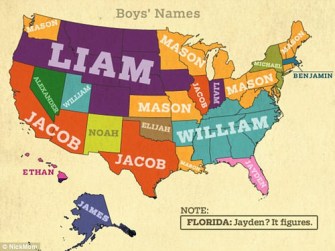 A very different picture emerges when we look at the regional distribution of most popular boy’s names. The picture is much more fragmented: 11 names circulate as states favourites, instead of only 5 on the girls’ side.

The most popular name, as per number of states, is Mason, top name in 16 states. Those states are all over the place: in the northwest (Washington), New England (Vermont, New Hampshire, Maine), throughout the northeast (Minnesota, Wisconsin, Michigan, Ohio, Pennsylvania, West Virginia, Maryland), in the midwest (Kansas and Arkansas), and the deep south (Louisiana). In a game of risk, my money would be on either of the two more compact runners-up, each with 10 states in their portfolio. Liam controls a giant block of the western United States, from Oregon to Iowa (plus an exclaved Indiana), while William controls much of the Old South, plus Utah. Smaller powers are the two tri-state blocks of Michael (New York, New Jersey, Delaware) and Jacob (California, Arizona, Texas, and Illinois). All the other states are Einzelgänger [8] – each in a gang of one. Old Testament names abound: Noah in New Mexico, Benjamin in Massachusetts, Elijah in Oklahoma, Ethan in Hawaii. Alaska opts for the New Testament (James), Nevada hearkens back to Greek history (Alexander) and Florida goes for Jayden.

The origin of that name is more obscure than most other popular names. It shot up the rankings out of nowhere starting in 1994, when it entered the Top 1000 at #851 (with 159 Jaydens born). In 2011, Jayden was the 4th most popular boys’ name, with just under 17,000 boys of that name born. Its vertiginous climb was helped by the fact that Will Smith named his son Jaden in 1998. The origin of the name could be Biblical (there is a Jadon the Meronothite in Nehemiah 3:7), but perhaps more likely is an origin in a Star Trek episode originally aired in 1994. In the episode, Lt. Cdr. Data, having lost is memory,  is named Jayden by inhabitants of an alien planet.

Many thanks to Astrid Geeraerts for sending in these two maps, found here at the Daily Mail.

[2] The term ‘cohort’ originally applied to the size of a non-Roman infantry unit that proved versatile enough on the battlefield to be integrated as a standard subdivision of a Roman legion. After the Reforms of Marius (in 107 BC), a legion (3,600 to 6,000 soldiers strong and commanded by a legatus) was subdivides in 10 cohorts (360 to 600 strong, and led by a tribune). Each cohort was composed of three maniples (120 to 200 soldiers each), and each maniple split into two centuries (each about 80 soldiers). Although cohorts often didn’t have separate commanders, they were ranked for the quality of their soldiers, with the bravest, most battle-hardened troops in the first cohort, which was usually deployed at the most crucial parts of the battlefield. ‘Cohort’ is also used in a demographic sense, to group people born in a certain period that share a certain characteristic. Say, just over 22,000 Sophias – about 4 legions strong…

[3] The study of the names of human beings, including given names and surnames, but also nicknames, patronyms and matronyms (names referring to a person’s father and mother, respectively), teknonyms (names referring to a person’s children, sometimes also symbolically, e.g. Abu Nidal [‘Father of the Struggle’], or Abu Dhabi, [‘Father of Deer’, possibly after a local hunter of gazelles]. The city of that name was sometimes also called Umm Dhabi [‘Mother of Deer’], while the original toponym was Milh [‘Salt’]).

[5] In the US, the data is released by the Social Security Administration. For an overview of popular baby names elsewhere, see this link.

[6] contiguous derives from the Latin contiguus (‘touching’), and is related to the words contact, contingent and contagion. Synonyms: coterminous, adjoining. Most often used in: the contiguous US, i.e. the ‘Lower 48’ (the 48 states of the US that ‘touch each other’, i.e. excluding Alaska, Hawaii and other off-shore US territories and possessions).

[7] The definition of enclaves and exclaves bears repeating here. An enclave is a piece of sovereign territory wholly enclosed by another country. The enclosed country may be sovereign (e.g. the Vatican, within Italy) or dependent (e.g. Baarle-Hertog, Belgian territory within the Netherlands), but cannot border the sea (e.g. Monaco, bordering France and the Mediterranean), for in that case it is not wholly enclosed. An exclave is a piece of sovereign territory that is separated from its ‘mainland’, by another country, and/or by the sea. So Kaliningrad, bordering Lithuania and the Baltic Sea, is a Russian exclave (but not an enclave). And Lesotho, a sovereign nation encircled by South Africa is an enclave (but not an exclave).

[8] The opposite of a Doppelgänger.

People naturally judge fact from fiction in offline social settings, so why is it so hard online?
Up Next

A friend of mine, school psychologist, told me recently how she was asked by parents to deliver a presentation on future career opportunities in front of third graders. She called […]