The purple blob in the middle is a matriarchal zone, where females rule, and social stress tends to be relieved through sex. The orange, green and yellow areas arching around the blob are patriarchies. Here, men have the upper hand, and conflicts are settled mainly by violent means.

We’re not talking humans here, but if both behavioural patterns sound all too familiar – the former as a naive, outdated hippie utopia [1], the latter as the cynical, and all too current underpinning to much of what ails the world – it’s because they are exhibited by humanity’s two closest living relatives.

Each colour on the map denotes the habitat of a particular type of hominid [2]. The purple zone is the domain of the bonobo (Pan paniscus), the others are inhabited by varieties of chimpanzee (Pan troglodytes) [3]. Both ape species are closely interrelated – so closely, in fact, that the bonobo was only recognised as a separate species in 1928 [4]. 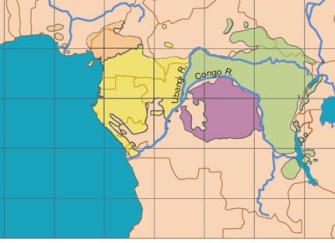 Which is not surprising. Bonobos and chimps look very similar, the former being slightly smaller versions of the latter. Still sharing 99.6% of their DNA, bonobos and chimps started developing along separate evolutionary paths about 1 million years ago, when the Congo River divided Pan‘s ancestral homeland.

As great apes are notoriously reluctant swimmers [5], all contact between the populations on either side of the river ceased. Over time, separate geographies led to different societies. The Pan population south of the river developed into the bonobo [6], those on the Congo’s north bank became chimpanzees. The southern border of the bonobo habitat is formed by the Kasai and Sankuru rivers.

Some researchers speculate that bonobos developed their more consensual approach to conflict resolution because their habitat had better food resources. Plus, they didn’t have to compete for them with gorillas, who live only on the right bank of the Congo. Both factors would explain why bonobos experience less need for confrontation.

But others wonder whether the reverse might not have been the case.  Perhaps it was the chimpanzee who adopted a more violence-based resource management policy, in reaction to scarcer food supplies. Necessity being the mother of invention, that scarcity might also explain why chimps adopted tools, which bonobos as yet haven’t done.

Did chimpanzees become more violent, or bonobos more promiscuous than their Pan ancestor? That might sound like a simian variant of the chicken-and-egg question. But it is more relevant to who we are as humans, because of our close relation to the Cain and Abel of the ape world.

These genetic differences could eventually help explain why bonobos are more playful than chimpanzees, and why humans are more cerebral than either. And perhaps even help answer the ultimate question, relevant to the deep origins of human nature: Did our common ancestor behave more like a bonobo, like a chimp or like yet something else?

This map doesn’t answer that question, but it does offer us a tantalising glimpse in the social structure of our closest cousins – and our own: divergent behaviour can be determined by sheer geographic accident.

In ape society, those cultural differences are neatly defined by Central Africa’s big rivers. Human society is more complex – or at least more difficult. Even though we are a single species, we often find a Congo River to divide us from our fellow humans.

And if we don’t, we go look for one. Geography is one of the firm foundations of our everyday human prejudices: Northerners are stern, hardworking folk, Southerners are jovial layabouts; Western society is decadent and atomised, Eastern society is callously collectivist. And so on.

But we don’t have to stare at each other across the fast-flowing water of our mutual incomprehension until a million years turn us into separate species. Fortunately, we are the one ape that can teach itself to swim. If we can overcome our fear of water, why not our fear of each other?

[1] The phrase ‘Make love, not war’ gained currency in the mid-1960s as a countercultural slogan against the Vietnam War. The quote is sometimes attributed to John Lennon, who wrote a song with that title during the Let It Be sessions (1968-’70), recycling it as Mind Games for his eponymous 1973 solo album. A chronologically more apposite claim is that of the American folklorist, and chroniqueur of the bawdy, Gershon Legman (1917-’99), who theorised that sadism and violence were so deeply ingrained in American culture because of a strong taboo on sex. Legman claimed to have invented ‘Make love, not war’ for a 1963 lecture at the University of Ohio. Other candidates include Louis Abolafia, who ran for president in 1968 on the Nudist Party ticket (his campaign slogan was ‘I have nothing to hide’), the German-American philosopher Herbert Marcuse, a University of Oregon student named Diane Newell Meyer, and Franklin and Penelope Rosemont, who turned the slogan into a popular button. The French version of the slogan is sometimes completed with: faites les deux, mariez-vous! (‘make both, get married!’)

[2] Hominidae refers to a taxonomic family of the primate order, consisting of four genera: Pan (chimps and bonobos), Pongo (orang-utans), Gorilla (gorillas), and Homo (humans). These four hominids are also referred to as ‘great apes’, although humans are sometimes excluded. The term hominid should not be confused with hominin (describing humans and their closer-than-chimp, extinct relatives, like Neanderthals, or the recently discovered ‘Flores Man’), hominine (any member of the Homininae subfamily, which includes all hominids except orang-utans), and hominoids (great apes and lesser apes – i.e. gibbons).

[4] By the German biologist Ernest Schwarz, after the analysis of a skull initially believed to be a chimpanzee’s, in the Africa Museum at Tervuren, near Brussels. Making the bonobo the only species of ape discovered in Belgium.

[5] Ernest Schwarz’s paper on the discovery of the bonobo was called ‘Le chimpanzé de la Rive Gauche du Congo’, which could be interpreted as a tongue-in-cheek reference to the bohemian lifestyles on the Rive Gauche in Paris (i.e. the Left Bank of the Seine). The term ‘bonobo’, incidentally, didn’t come into use until the 1950s, and may derive from a Bantu word for ancestor, or from a mis-read place of origin on one of the crates destined for the Tervuren museum (i.e. the Congo river town of Bolobo).

[6] Most animals instinctively know how to swim, but none of the great apes (including humans) are natural swimmers; what aquatic skills they have, need to be taught actively. Nobody really knows why this is so, but some theories include the relatively high body mass ratio, or the fact that apes are sentient enough to panic when in water. The latter theory could help explain why monkeys can swim. Monkeys are distinct from apes in that they have tails, live in trees, and generally have significantly smaller bodies and brains.

[7] Scientists from the Max Planck Institute in Germany have calculated that this implies that the group of common ancestors from which humans, bonobos and chimpanzees eventually evolved, was quite large, numbering about 27,000 breeding individuals.

Ancient humans may have evolved to slumber efficiently — and in a crowd.
Up Next

Is This An Exercise of Free Will?

It’s important to recognize that there’s this interplay between what the individual can do and what society can do to empower individuals to live longer and healthier, more productive lives.