As in biology, diversity is a good indicator of culinary origin 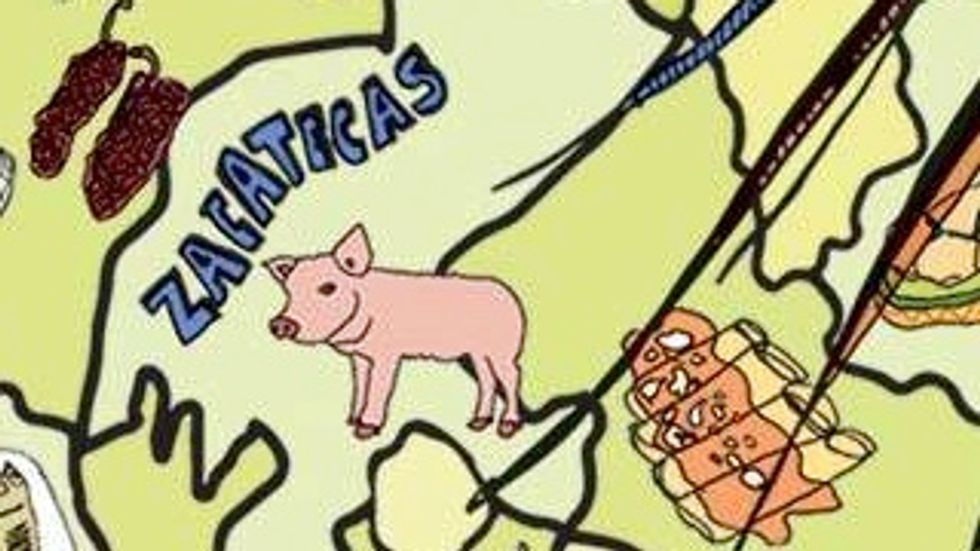 Charles de Gaulle, exasperated by his countrymen, once asked of France: "How can you expect to govern a country which has 246 varieties of cheese?" [1] If culinary diversity is an indicator for political instability, then there can't be much hope for Italy, with over 350 different pasta shapes [2], or Mexico, with its innumerable varieties of taco.

The taco is the genius of simplicity applied to food preparation. It is a tortilla [3] folded or rolled around almost any type of food, which can then be eaten by hand. A staple of the Mexican diet for thousands of years before the Spanish Conquest in the 15th century, the taco has now conquered the rest of the world, beginning with the United States from the early 20th century onwards.

But no matter how all-American (and subsequently global) the taco has now become, its pedigree remains undisputedly Mexican, as demonstrated by the rich regional diversity of taco styles shown on this map [4].

"The gastronomic map of [Mexico] is so varied that only the most delicious tacos have made the grade, and only if they are deemed to be typical of a certain region or state", says the legend of this tacografia of Mexico. It lists taco specialities for all 31 of Mexico's states and its federal district [5].

Even this summary - rich, varied, spicy - is more than we can stomach; to provide just enough flavour, without killing your geographic taste buds, please find below an alphabetic list of each of Mexico's territories, plus one of its specialities.

As even this brief overview shows, tacos are extremely adaptable to what each region has to offer: filled with beef, pork or seafood, vegetables, eggs or cheese; garnished with all kinds of pepper, greens and salsa. Some of the regional favourites are depicted on the map - from the cows that will become beef, and the pigs that will turn into pork [6]. Much, much more on the history (and the preparation) of tacos can be found in La Tacopedia, the book from which this cartographic overview (by way of index) has been taken.

Many thanks to Rich Wilson for sending in this map, found here on L.A. Taco, Celebrating the Taco Lifestyle in Los Angeles.

Previous examples of culinary cartography posted on this blog include a discussion of Switzerland's Röstigraben (#257), France's curious pain au chocolat dichotomy (#585), and an overview of its different types of bread: fortunately, a mere 80 varieties, Mon Général (#94).

[3] Yes, I hear you ask, but what then is a tortilla? Literally, in Spanish, a 'small torta' (cake). Mainly, however, a type of thin flatbread originally made from maize by the first peoples of Mexico, later also from flour after the Spanish Conquistadores brought over wheat from Europe. Tortillas remain a staple food in Central America, have become ubiquitous in North America, and have even been adopted for use in space, where they have proven easier to handle than 'traditional' bread. They are an essential ingredient for many traditional Mexican dishes, including tacos, burritos (folded shut, unlike the half-closed taco), and enchiladas (usually folded in half, calzone-style), but also as the basis for tortilla chips.

[4] As in biology, diversity can be a good indicator of culinary origin.

[5] If that sounds vaguely reminiscent of the US setup, it is no coincidence. The official title of the federal state is Estados Unidos Mexicanos ('United Mexican States'), obviously inspired by the revolutionary republicanism of the United States of America. Compare the name of the short-lived Belgian republic (Jan-Dec 1790): États-Belgiques-Unis ('United Belgian States').