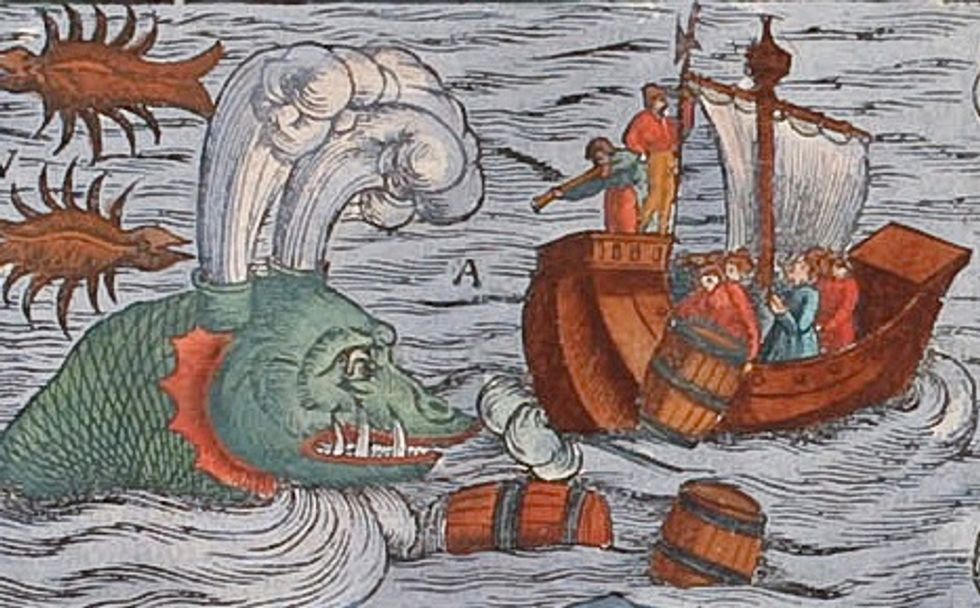 One of cartography’s most persistent myths: mapmakers of yore, frustrated by the world beyond their ken, marked the blank spaces on their maps with the legend Here be monsters.

It’s a pleasing hypothesis. For to label a cartographic vacuum with the stuff of nightmares solves two problems at once. It explains why the fringes of contemporary knowledge didn’t match the outer limits of the entire world - monsters were keeping us out! And, by being equal parts fantastic and horrific, those monsters symbolise our fascination with the known unknowns [1] just out of our reach. What keeps us out is also what draws us in.

Unfortunately, the theory suffers from an all too common trifecta: it’s neat, plausible and wrong. No map dating from the Age of Discovery (or before) is emblazoned with the slogan Here be monsters, nor with its variant: Here be dragons [2]. At least not in English, or any other vernacular [3] language. But there is one (if only just one) example in Latin:  h[i]c sunt dracones, placed over the eastern shore of what is barely recognisable as Asia, on the so-called Lenox Globe [4].

Dated to circa 1510, this globe was only first described in the Magazine of American History in 1879. Curiously, the article linked the legend on the map to the Dagroians, a people mentioned in Marco Polo’s Travels. Others have explained the reference as an echo of the Komodo dragons [5], stories of which may have spread far beyond their habitat. This globe, therefore, may not be the original source of the Here be dragons myth.

The likeliest source are the dragons themselves - images of dragons, that is. Since ancient times, maps have warned of terrifying creatures in faraway lands - not all of them imaginary. The Tabula Peutingeriana lists elephants, scorpions and cenocephali (dog-headed creatures) as hazards of a Roman-era road trip.

In Christian imagery, the dragon symbolises sin, evil, paganism, or the devil himself [6]. This explains why dragons appear on medieval maps, like the Psalter map (ca. 1250), where it is counterweighted by Christ and his angels on the recto side, and trampled by Jesus on the verso side. Other examples include an Asian dragon on the Borgia map (ca. 1430), and a whole menagerie of monsters in the northern Atlantic on the Carta Marina by Olaus Magnus (1539).

Interesting about the Carta Marina is that the map monsters have migrated away from the land. As the Age of Discovery unfolds, mainly via seafaring exploration, the horrors of the unknown are transposed to the high seas.

A few years after Olaus Magnus’s map, another catalogue of cartographic monsters hit the presses: an image in Sebastian Münster’s Cosmographia (1545) of  ‘Wonders of the sea and rare animals, as they are found in the midnight lands in the sea and on the land’ [7].

Sebastian Münster (1488-1552) was a Franciscan friar with a talent for Hebrew and geography, who became an influential linguist and cosmographer [8]. He converted to Protestantism before he published his magnum opus, the Cosmographia, in Basel in 1544.

That work, aimed to be a 'description of the whole world, and everything in it', eventually [9] entailed over 1,800 pages divided into six books, and more than 60 maps plus in excess of 70 vedute [10]. It was a combination of what we would now call an atlas, an encyclopaedia and a syllabus on math, language, history and ethnography. The Cosmographia took 20 years and 120 collaborators to compile. The contributions of those collaborators were not without consequences: Sigismondo Arquer died at the stake for his sharp criticism of the Catholic church in his piece on Sardinia [11].

Other, but perhaps less lethal, criticism can be levelled at the sources, which often confound truth with fables. Among the strange creatures of variable veracity described in the Cosmographia are the aforementioned dog-faced creatures, so-called Blemmyes [12], and the sea monsters on this map.

The creatures are labelled alphabetically, with their description elsewhere in the Cosmographia reading as follows:

A - Whale fish as big as mountains are seen around Iceland. If they are not scared away with trumpet calls or jettisoned barrels, with which they gambol, they turn your ships over. It also happens that seamen assume to approach an island, in fact a whale, cast anchor, and are in a pretty pickle then. Such whales they call troll whales, i.e. devil whales. In Iceland people build their houses with the bones and fishbones of such big whales.

B - This is a rude ilk of great monster called Pristis or Physeter, mentioned by Solinus and Pliny. It rears up its head, spouts water into the ships and thus sinks and drowns them.

C - In the ocean one finds sea snakes, 200 and 300 feet long. They twist around the ship, harm the sailors, and attempt to sink it, especially when it is calm.

D - These are two gruesome beasts and monsters, one with cruel teeth, the other with cruel horns and a frighteningly fiery face. Its eyes are sixteen or twenty feet in circumference. Its head is square and has a big beard. But the hind part of is body is small.

E - This beast may not be filled. In Swedish it is called Jerf, and in German Vielfraß, in Latin Gulo [wolverine]. When its belly is very full, so that no more goes in, it looks for two trees standing close to each other, pulls its belly through between them, so that it has to defecate, thus emptying its belly, and then can eat more. If hunters catch one, they shoot it on account of its spotted fur, which is nicely patterned like a damascene cloth. The nature of people wearing this fur is often changed into this beast’s nature.

G - [sable, martens, bears & other animals in the woods]

H - This beast is called Ziphius and is a scary sea monster. It devours the black seals.

I - Duckbirds, commonly called tree birds, grow on trees, as described 400 years ago.

L - This is a whale fish, too, and is called Orca by many, but the Norwegian call it springhval on account of its swift movements.

N - A gruesome beast, partly resembling a rhinoceros. Pointed at the nose and the back, eats large crabs called lobsters, is twelve feet long.

These descriptions were taken here from Tom Lytle's website. The list is incomplete: the beasts listed below were not described. Provisory labelling my own.

Q - Snake farmer poking the merchandise to check whether they're ripe.

R - Only known representation of the fabled Nordic Emu, reputedly extinct because its large blue tongue made it difficult to swallow its prey.

S - Early channel swimmer, bereft of choice: back then, there were only three channels.

V - Two examples of the microchip fish. Not clear whether they're extinct, or by now too small to see.

One could contend that Olaus Magnus’ representation of strange animals of the north is as visually arresting as this chart, and more ‘mappy’. But Münster is a favourite of this blog, not in the least because of his uncanny affinity with strange maps - examples previously discussed in #141, #209 [13] and #404. Hence, in honour of Mr. Münster, and as an indulgence for the 600th map on this blog, we present Münster's Monster Mash.

This map found here on Wikimedia.

[2] The difference between a monster and a dragon? A monster is any type of horrific creature that inspires fear and threatens harm. A dragon is a more specific monster: a giant, winged lizard, often keen on fire-breathing and gold-hoarding. ↩

[3] I.e. domestic, national languages, as opposed to the lingua franca of the day, Latin. ↩

[4] A.k.a. the Hunt-Lenox Globe, a hollow copper sphere that is one of the oldest surviving terrestrial globes. It only entered modern annals in 1855, when the American architect Richard Morris Hunt (1827-1895; designer of the Metropolitan Museum in New York) acquired it in Paris. Morris then gifted it to the bibliophile and collector James Lenox, who in turn bequeathed it to the New York Public Library. The globe now resides in the NYPL’s Rare Book Division. ↩

[5] The Komodo dragon is the world’s largest lizard, reaching over 3 metres in length and up to 150 kilos in weight. Its current habitat is limited to a handful of small islands, including Komodo, and small parts of the larger Flores island, all in the Indonesian archipelago. Its main prey is the Java deer. The animal only first came to the attention of Western scientists in 1910, and new aspects of its biology are still being discovered. Only recently has it become clear that the dragon produces a poison, and that it can reproduce parthenogenetically (via ‘virgin birth’). The relatively recent discovery of this giant lizard was an inspiration for the 1933 movie King Kong. ↩

[7] Meerwunder vnd seltzame Thier, wie die in den Mitnächtigen Ländern, im Meer vnd auff dem Landt gefunden werden. The chart was largely based on the Olaus Magnus map. Both images served as sources for the sea animals on Ortelius’ 1587 map of Islandia (Iceland). ↩

[8] On his tomb in Basel Minster, Münster is called the 'German Strabo', after the Greek geographer. The German word for minster, incidentally, is Münster. Germany honoured Münster by portraying him on the 100-Deutschmark note, which was in circulation between 1962 and 1991. ↩

[9] At its first edition, the Cosmographia counted 660 pages. Over subsequent editions, many in other languages than German, more information was added. At its last printing, in 1628, it had almost tripled in size, to 1,800 pages. ↩

[10] A veduta (from the Italian for ‘view’, plural: vedute) is a panoramic painting of a cityscape. ↩

[11] As described in the 2006 historical novel Le fiamme di Toledo by the Italian novelist Giulio Angioni. ↩

[12] Headless humanoids with eyes and mouths in their chest.↩

[13] A 19th-century school atlas map based on this map in the Cosmographia. ↩