What was first, the chicken or the map? That question is perhaps as unanswerable as the one featuring hen vs. egg [1]. Not that it matters. Stare long enough at these twin images, and you will never see a map of China again without thinking of an agitated chicken flapping its wings as it runs eastward to chase a – what is that?

The chicken’s comb mimics Manchuria’s border with Russia, shaped in real life mainly by the Amur river. The hollow of the animal’s back allows for the space occupied by Mongolia, wedged between Russia and China, while the tailfeathers represent Xinjiang, formerly known as East Turkestan, China’s Wild West [2]. The chicken’s fluff and hock [3] vaguely correspond to China’s southernmost provinces, Yunnan, Guangxi and Guangdong. The arc formed by the coastal provinces is the chicken’s breast. 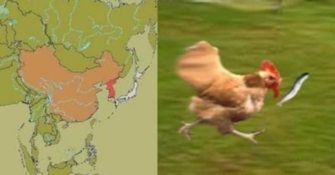 But one part of the chicken is not Chinese at all: the wattle – the fold of skin falling from its chin – is the Korean peninsula. And that vertical, silvery thing it’s chasing? A herring? Or Japan? Or both. But why, and how, is it that a chicken is pursuing a fish? Bereft of the image’s original context, we’re left guessing. Are there any Chinese proverbs about the incompatibility of both countries? Confucius says – the best friend of a chicken has feathers, not gills. Or Japanese sayings on the two countries’ mutual distrust? Japan needs China like a fish needs a chicken [4], perhaps.

The incongruous presence of a fish in this picture raises the possibility that it was photoshopped in, to provide an unlikely Japan as the geographic décor or a chicken accidentally snapped in a China-like posture.

Could it be that East Asia is particularly susceptible to this sort of zoomorphism? In another map, the chicken’s wattle – not the most awesome feature of a hardly heraldic bird – is represented by a magnificent tiger, aggressively clinging on to the mainland [5].

Halfway across the world, another living being has been discovered hiding in the map. Many have by now forgotten about the Iron Curtain that divided Europe’s communist East from its capitalist West. Fewer still will have noticed the mystical Iron Curtain Man staring west, his profile highlighted by the very division that had descended from ‘Stettin in the Baltic to Trieste in the Adriatic’ [6] across the continent. 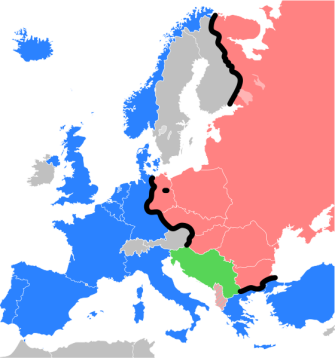 This map shows the face of Iron Curtain Man particularly well: West Berlin, the capitalist enclave in communist East Germany, is his eye, the Thuringian bulge westward his nose, the eastward push of Austria his mouth, opened in amazement or to let out a shout. The face ends where the clear division between east and west ends: at the border of Yugoslavia, officially socialist, but a champion of the Non-Aligned Movement.

The mass of red towards the northeast, indicating the Soviet Union and its satellites, gives the face a body falling towards the rest of Europe, as if to devour what’s left of it. Which is not unlike some propaganda maps showing the continent from a particular perspective to accentuate the vastness of Moscow’s dominion, and the threat it posed to the rest of Europe [7]. Iron Curtain Man is also reminiscent of the Long Man of Wilmington [8], the Cerne Abbas Giant [9], and other hill figures carved into the British landscape to dominate it. Although the age of these chalk-lined drawings is hard to ascertain, they have proved more durable than Iron Curtain Man. It remains to be seen whether they will survive the image of the China Chicken, now indelibly imprinted on your cartographic memory.

Many thanks to Youssef Joumani for sending in the China Chicken Syndrome map (found here on 9gag), and to Vineet Udeshi for alerting me to the Man in the Iron Curtain (found here on Wikimedia Commons).

[1] Or perhaps not, as that age-old conundrum, stumping philosophers since at least two millennia, seems to have been decided in 2006. A panel consisting of a philosopher, a geneticist and a chicken farmer found in favour of the egg.

[3] At least that’s what these regions are called on this diagram of a chicken’s parts.

[4] The feminist slogan A woman needs a man like a fish needs a bicycle, was popularised by the American women’s lib pioneer Gloria Steinem, but first conceived by the Australian activist, politician, writer and filmmaker Irina Dunn.

[6] In the words of Winston Churchill’s famous speech at Westminster College in Fulton, Missouri on March 5, 1946, in which he coined the phrase ‘Iron Curtain’. Some poetic licence – or political wishful thinking – was involved: the northern terminus of the Curtain would turn out to be nearer Lübeck, on the border between what were to become East and West Germany, rather than on the new German-Polish border near Szczecin (formerly Stettin).

A Carrington-magnitude event would kill millions, and cause trillions of dollars in damage. Sadly, it isn’t even the worst-case scenario.
Up Next

“Humbug,” harrumphed Minimalist/Conceptual artist Carl Andre recently in response to a question about Conceptualism in art today. “I think it is humbug myself,” Andre announced, channeling his inner Ebeneezer. “That […]