Why get done today what you can put off until tomorrow? Anyone who knows that feeling is an honorary citizen of this virtual country: Procrasti-Nation.

For Freud, the need to procrastinate is a function of the Pleasure Principle, which dictates that we seek gratification, or least avoid pain and negative emotions. This explains why it is such a universal human urge.

The word in English derives from the Latin pro (‘forward, towards’) and crastinus (an adjectival form of cras, ‘tomorrow’); many other languages use a vernacular term, demonstrating how deeply ingrained the contraproductive urge to postpone really is.

Greeks, now entering its sixth straight year of recession, might be more prone to anaboli than is good for them; but even the (supposedly) more industrious Germans have an intimate knowledge of Verzögerung.

If the Irish word – moilleadóireacht – sounds long and convoluted enough to be the name of a railway station in Wales, the Welsh themselves have apparently found that brevity is the soul of procrastination, which they call, simply, oedi.

A Norwegian on an off-day might call his failure to attack the day’s work sommel, while his Swedish colleague would label it förhalning. Procrastinating Balts know the feeling as viivitamine (Estonian), atlikšana (Latvian), and vilkinimas (Lithuanian).

The Catalan version of postponing urgent stuff until mañana is called dilació, while Serbs and Croats can agree to observe a spot of odugovlačenje until they feel like resuming their duties.

In Turkey, procrastinators practice erteleme; in Hungary, halogatás; in Poland, kunktatorstwo. To speakers of Swahili, it’s uajizi, while Indonesians know the feeling as penundaan. Gujarati defines it concisely as Ḍhīla, while Tamil speaks of Kālam kaṭattal, and Thai of kār p̄hạdwạnprakạnphrùng – a word so long you might want to consider procrastinating rather than pronouncing it. 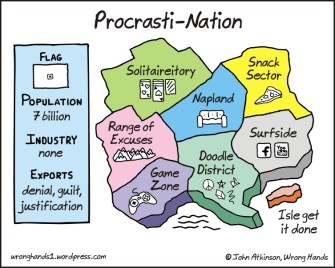 So – procrastination is the great unifier of humanity: alle Menschen werden Brüder – but forever tomorrow. In the mean time, we live in Procrasti-Nation, that limbo between the imperfect, unfulfilled Now and that moment, ever receding behind the horizon, when all our errands are run, and our To Do Lists done.

Continuing the wordplay that spawned this map, Procrasti-Nation (Population: 7 Billion; Industry: None; Exports: Denial, Guilt, Justification) is divided into a number of districts that derive their name from punning, alliteration, etc.

Solitaireitory in the northwest refers to the classic card game standard on many computers, and an excellent means to while away a few crucial hours instead of finishing that report. Nearby Napland (not to be confused with Lapland) shows that comfy sofa, the allure of which is parallel with the urgency of the task at hand, and the lateness of the hour. Snack Sector is another area well known to procrastinators (very few of whom are rake-thin).

When Jonathan Franzen writes, it’s in a closed room without internet connection, and on a laptop that has its USB port glued shut. Sounds like Mr. Franzen is well aware of the danger of Surfside: that nagging semi-certainty that someone somewhere on the internet is saying, doing or showing something that’s more interesting than fiddling with that next paragraph.

Let’s hope Franzen didn’t bring a pen and paper to that writer’s den, or he might still fall for the analog traps laid out in Doodle District. Others might linger in the Game Zone, and everyone else will find an appropriate form of self-justification in the Range of Excuses.

Off the coast lies Isle Get It Done, an insular expression of that self-delusion which usually props up midway a good session of procrastination.

Obviously, Procrasti-Nation is not the only country which can be conceived in such a way. What about Indig-Nation? Stag-Nation? Or even Hyphe-Nation? Any good maps of these or similar lands will be considered for publication. So to your drawing boards! Now! Or, of course, tomorrow.

Many thanks to Robert Capiot and Alessandro Nicoli de Mattos for sending in this map, found here on MakeUseOf, originally produced by John Atkinson, whose blog can be found here.

The genes responsible for facial features may also influence behavior.
Up Next

Optimism Bias – “Things will work out okay” or “things will work out better for me than the next guy” or, simply, “It won’t happen to ME!” – is one the mental games we play in order to do the things we want to do even when those choices come with costs or danger.