Geography was my favourite subject in school; physics the one I disliked the most. If only I’d known about this Map of Physics!

This spatial representation of the subject, dating from 1939, defines itself as Being a map of physics, containing a brief historical outline of the subject as will be of interest to physicists, students, laymen at large; Also giving a description of the land of physics as seen by the daring sould who venture there; And more particularly the location of villages (named after pioneer physicists) as found by the many rivers; Also the date of founding of each village; As well as the date of its extinction; and finally a collection of various and sundry symbols frequently met with on the trip. 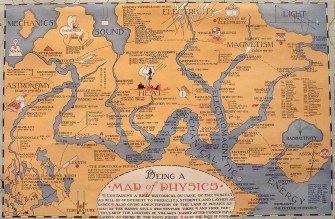 Perhaps, by representing physics as a continent and its main branches as rivers, it would have made that vast, mysterious subject more graspable to a mind more attuned to geography. And maybe, by populating its districts with villages named after famous physicists, the relation between those pioneers and their field of expertise would have been easier to memorise.

Those fields are, left to right and top to bottom: Mechanics, Sound, Electricity, Magnetism, Light, Astronomy, Heat, Mechanical and Elecromagnetic Energy, and Radioactivity.

The map is more than a random representation of the different fields of physics: by displaying them as topographical elements of the same map, it hints at the unified nature of the subject. “Just like two rivers flow together, some of the largest advances in physics came when people realised that two subjects were [like] two sides of the same coin”, writes Jelmer Renema, who sent in this map.

Some examples: “[T]he joining of astronomy and mechanics […] by Kepler, Galileo and Newton (who showed that the movement of the Moon is described by the same laws as [that of] a fallling apple.” At the centre of the map, mechanics and electromagnetism merge. “Electromagnetism [itself is] a fusion between electricity and magnetism, which were joined when it was noted by Oersted that an electric current produces a magnetic field, and when it was noted by Faraday that when a magnet is moved around in a wire loop, it creates a current in that loop.” 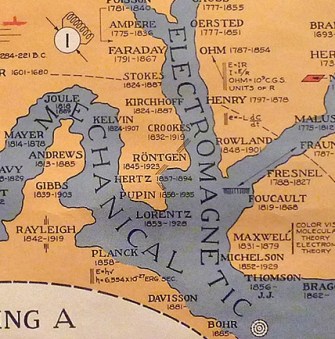 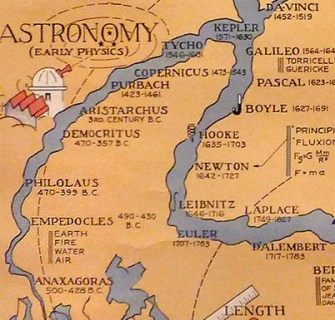 Across the map are strewn some observations about physics, including its definition (“A science which concerns itself with the fundamental laws of the material universe”), its structure (“Electronic, periodic, flow and field phenomena, and energetics”), its history (“Speculative, experimental, classical and modern periods”) and even a list of Nobel Prize winners, up until the 1938 laureate, Fermi.

If the scientists’ names represent settlements, they mimic real-life toponymy in at least two respects. Some names appear more than once: Newton appears on the banks of the river leading from Light to Electromagnetic Energy, on the opposite bank of Huygens; but also between Hooke and Leibniz, on the shores of the stream between Astronomy and Mechanical Energy.

Another similarity with actual place-names: while some names still ring out with the familiarity of world fame, others have faded into obscurity. Heisenberg and Einstein appear in the southeast, close to The Future of Physics; ancient luminaries like Euclid, Pythagoras and Aristotle mingle with more recent worthies like Faraday, Fahrenheit, Becquerel, Geiger and Röntgen. But who were Soddy, Rowland, or Pupin?

Apart from the obscurity of their achievements, another reason this map never made it into my physics classroom is that it fails to represent the last great unification in physics. “[This] took place in the 1960s and 1970s, [combining] electromagnetism on the one hand and the phenomena occurring inside the atomic nucleus (called the ‘strong’ and ‘weak’ forces) on the other hand. This unification led to what is called the ‘standard model’ of physics. The last piece of that puzzle (probably) was put in place with the discovery of the Higgs boson this year.”

But maybe the map is flawed on a much deeper level: “[It] emphasizes the continuity in the development in physics, rather than the revolutionary character of the discoveries in the previous decades. In the 1920s and 30s, a group of physicists – among others Niels Bohr, Paul Dirac and Werner Heisenberg, discovered quantum mechanics, which was a theory which altered our understanding of how the universe works from a fundamentally deterministic one to one which is fundamentally probabilistic. We can speculate that either the person who made this map failed to appreciate this, or that he continued to hold out for a deterministic universe. It was not until the 1964 and the brilliant work of John Bell that it was shown that any such worldview is fundamentally incompatible with experimental facts.”

Many thanks to Mr Renema for sending in this map, found here on The Quantum Pontiff, a blog about “the wondrous quantum world in which we live”.

NASA was dangerously cavalier about the dangers of the shuttle launches.
Up Next

Only two authenticated images of Emily Dickinson exist: one a painting of her (and her siblings) as a child, the other an iconic photograph of her as a teenager. In […]