The link between blindness and cartography makes more sense than one might think: spatial awareness – knowing where things are without necessarily seeing them – is a trait overdeveloped in blind people, making them especially sensitive to the geo-distributive aspect of maps. As was apparent when blind children were taught to read these raised-relief maps in 1830s Boston:

“They soon understood that sheets of stiff pasteboard, marked by certain crooked lines, represented the boundaries of countries; rough raised dots represented mountains; pin heads sticking out here and there, showed the locations of towns; or, on a smaller scale, the boundaries of their own town, the location of the meeting-house, of their own and of the neighboring houses, and the like; and they were delighted and eager to go on with tireless curiosity. And they did go on until they matured in years, and became themselves teachers, first in our school, afterwards in a private school opened by themselves in their own town.” 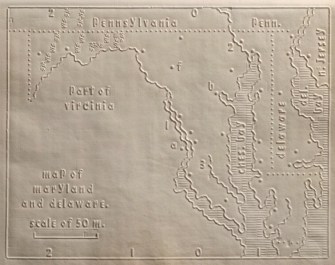 A map of Maryland and Delaware, showing Virginia pre West Virginia’s secession. The map does not show Delaware’s Twelve-Mile Circle.

The tactile maps shown here are taken from the Atlas of the United States Printed for the Use of the Blind, published in 1837. This precious, curious edition had a minuscule print run: no more than 50 copies were produced, for the New England Institute for the Education of the Blind [1]. Only five copies now survive. The Atlas consists of 24 state maps, each accompanied by a text describing the state and explaining the symbols used.

That text is not in Braille, but in a raised version of the Latin alphabet, which makes it easily decipherable for non-blind readers. In the introduction, Mr Howe writes:

“It is known that the contrivances hitherto used in Europe for the instruction of the blind in geography are very expensive, rude & imperfect, hardly deserving the name of maps. They were made by hand, either by puncturing through a common map the boundaries &c. or by first posting a map upon a board & then glueing upon it, strings or bits of pasteboard, to represent boundaries, rivers, &c.”

“There was no lettering, & no printed explanations, so that the blind could not tell by themselves, whether the portion they placed the finger upon was to represent one part of the globe or another; they required to be taught upon each map, by a seeing person.”

“This first attempt at embossing maps, was made at this institution [i.e. the aforementioned Institute]. After many expensive experiments a method of printing them was devised; & an atlas, the first of the kind, was published. It has been found a source of great pleasure & useful knowledge to the blind, who can study it unassisted by a seeing person.”

“[It] will give the blind the means of knowing the general outline, shape, & boundaries of each state; the rivers, principal towns, population & general statistics of the whole.” 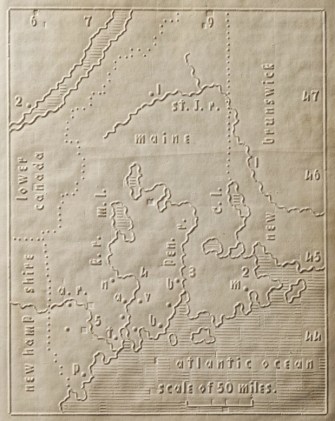 The entire atlas has been digitised and published by the David Rumsey Map Collection [2], with sideways illumination to highlight the embossed lines, dots, letters and symbols on the maps. This map shows the state of Maine, the accompanying text reads:

“You feel the eastern boundary line running north & south: it is not yet terminated on the north because its extent is yet in dispute with Great Britain [3]; on the north, the line of dots terminates at Grand Lake, marked GL. The boundary continues through the centre of the lakes & down the river St Croix until it reaches the ocean.”

“St J.R. is St. John’s River. Next south is St. Croix River; the lakes are called Schoodie; M. is Machias. No 3 is Penobscot R[iver]. B. is for Brunswick; the dot below is Belfast; [?] below is Thomastown: next west on the coast is Wiscassett; K.R. is Kennebec River: M.L. Moose Head Lake; dot next the mouth Gardiner; A. Agusta cap. 4th N. Norridgewock. 5 A.R. Androscoggin River. The dot Bethel. Dot south of it is Paris: on the coast Portland [?]. The island in the N.E. corner is Grand Menan: middle one is Mt. Desert Island: S.W. Fox Island. The River in Canada is St. Lawrence; 2. Quebec.” 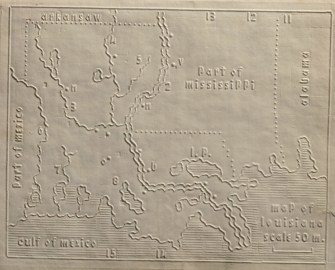 Many thanks to Kevin Axe and the Big Map Blog (which mentions the Atlas here) for pointing out this great book, scans of which can be found here at the DRMC.

[1] Founded in Boston in 1829 by Samuel G. Howe (1801-1876), the husband of Julia Ward Howe, the abolitionist who wrote the ‘Battle Hymn of the Republic’. The school, later renamed the Perkins School for the Blind and moved to Watertown (north of Boston), was mentioned in Charles Dickens’ American Notes, and schooled Helen Keller, the deafblind activist.

[2] The DRMC website contains over 17,000 digitised maps; the DMRC itself contains over 150,000 maps, and is one of the world’s largest map collections.

Non-Western thought is vast and ancient, so why don’t some consider it philosophy?
Hard Science

From succubi to aliens, stories of abductions or other unsettling encounters have been with us for millennia. What explains them?
Up Next

A Chance for Christians To Do the Right Thing

I had a fantastic time at the Secular Student Alliance leadership convention two weeks ago, and wrote enthusiastically of what a juggernaut of secular awesome the SSA is. Well, it […]