In Celtic legend, the island was almost perpetually shrouded in mist, and visible only for one day every seven years 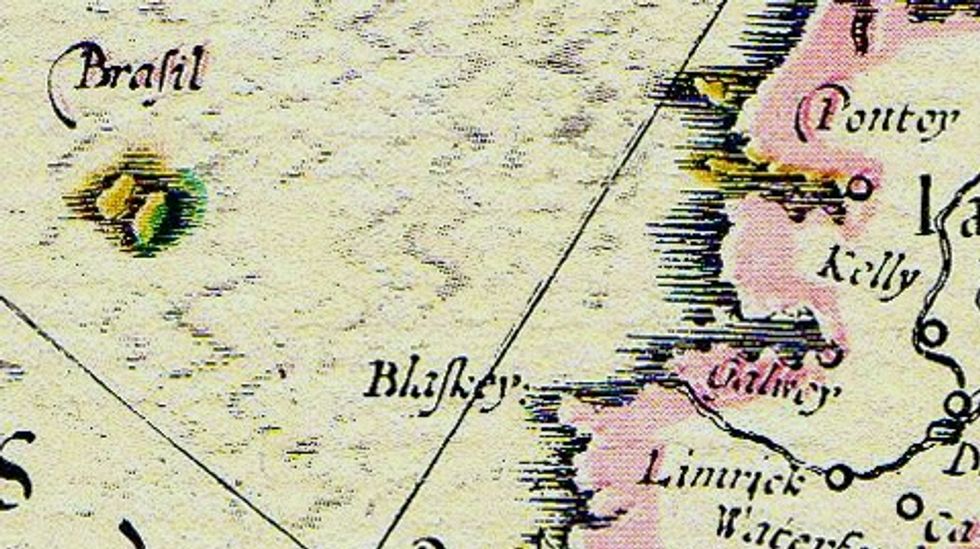 Map-readers knew about Brasil long before America was discovered; but they didn’t think of it as a giant country on a distant continent. Brasil, also known by the name Hy-Brasil [1], was a small, mist-shrouded island in the North Atlantic, not too far off Ireland’s west coast.

Only, Hy-Brasil never existed. Shown here on a Mercator map dating from 1623, it was one of many phantom islands that haunted marine cartography, sometimes for centuries, before more accurate observational techniques (and ultimately satellite photography) eliminated them all.

Like many other phantom islands, the cartographic existence of Hy-Brasil was based on a combination of flimsy legend, faulty observations, wishful thinking, and outright mendacity.

Although its name might refer back to age-old Irish legends of sea-faring expeditions striking land in the Atlantic [2], Hy-Brasil’s first recorded appearance on a map dates from around 1325, as Bracile on a portolan map.

In 1497, Spanish diplomat Pedro de Ayala reports home that John Cabot, the first European to visit North America since the Vikings in the 11th century, had made his journey with “the men from Bristol who found Brasil.”

Ayala also mentioned in that letter the Sete Cidades, a mysterious collection of seven cities supposedly founded in the 8th century on one or more islands in the Atlantic by Christians fleeing the Muslim conquista of Iberia. Which goes to show how fertile a breeding ground the oceanic expanse was for fantasies of phantom islands [3].

Sometimes fantasy became indistinguishable from fact. Hy-Brasil was rumoured to be continuously obscured by mist, except for one day every seven years. It must have been on one of those days in 1674 that captain John Nisbet, piercing a sea fog, anchored before the island, and sent a party of four ashore. The amazed sailors spent an entire day on Hy-Brasil, meeting an wizened old man - an Irish monk? - who provided them with gold and silver. A follow-up expedition by a captain Alexander Johnson also found Hy-Brasil, and confirmed captain Nisbet’s findings.

But thereafter, Hy-Brasil reverted to its elusive self. When shown on the map, its location was usually to the west or southwest of Ireland, but Hy-Brasil has also been located in the Azores, and shown as either one or two separate islands. As it’s very hard to disprove a negative, Hy-Brasil’s unfindability per se did not cause it to disappear off the map - only to shrink. When last observed on a nautical chart, as late as 1865, it had become the diminutive Brasil Rock.

There is some controversy over whether or not the country of Brasil owes its name to the phantom island of Hy-Brasil. Main argument in favour is the well-documented practise of transplanting other fictional names to real places in the Americas, such as Antillia (another phantom island, which became the Antilles). Argument against: Brasil was first called Terra de Santa Cruz (‘Land of the Holy Cross’), and renamed Brasil only after a few decades, when its coastal hardwood came to be exploited on a large scale. This was called pau-brasil in Portuguese, possibly derived from an old root word for ‘red’.

So was Hy-Brasil a pure legend without basis in fact, all wave and no shore? We’ll never know for certain. But maybe - just maybe - the legend of an island west of Ireland is a folk memory from the end of the last Ice Age, when sea levels were lower and the so-called Porcupine Bank, about 120 miles west of Ireland (and discovered only in 1862) may have been exposed above water. It fits with an alternate name for Hy-Brasil: Tir fo-Thuin, the ‘Land Below the Wave’.

The phantom island last made an appearance in 1872, seven years after its removal from official nautical charts. The traveller T.J. Westropp, having already seen the island twice before, had brought a shipload of witnesses (including his mother) to verify his sighting of Hy-Brasil. The party did indeed see the island appear - and then disappear, never to be seen again. A fitting end for a phantom island…

This map taken here from this page at the blog Windsong, where it deals with the story of Hy-Brasil and shows a few more maps.

[2] Hy-Brasil could be interpreted as Ui Breasal, Irish for ‘the clan of Breasal’, which would refer to the landing party that discovered (or settled) the mythical island. Other stories tell of monks settling on the island. This recalls the Irish legend of St Brendan’s Island, itself a frequently depicted phantom island.