Just before Rip Van Winkle falls into his thirty-year slumber, he encounters the ghostly spectacle of a handful of ancient Dutch colonials playing at ninepins, the thunder rolling across the Catskills as they bowl their balls.

This images has a similar, eerie quality. It shows a dozen gentlemen dressed up in the fashions of a bygone century, engaged in a spectral game of billiards. The billiard table itself is an 18th-century map of Germany.

The picture’s title is A la Guerre, oder: Historisch-Politisch-Kriegerisches Billiard Spiel der Streitenden Mächten in Teutschland. (‘A la guerre, or historical-political-military billiard game of the warring parties in Germany’). 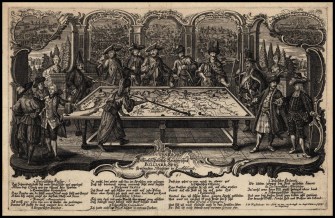 It was produced around 1760 by the Augsburg engraver Johann David Nessenthaler (1717-1766), and probably depicts an episode of the Seven Years’ War (1756-1763). Known as the French and Indian War in North America, the complex conflict, which opposed many warring parties, was fought also in Africa, Europe, the Caribbean and on the high seas. It would be fair to call it the First World War, if that title hadn’t already been taken. In Germany, it is also called the Third Silesian War, for its main theatre of operations.

On this image, Nessenthaler shows allegories of the combatants around a billiard table, each dressed up in their national military uniform. The figures are lettered, and are:

(a) a Prussian hussar

(b) a Hanoverian grenadier

The dialogue between the players is unfortunately illegible on this version of the map.

This manipulation via long sticks of objects on a large, table-top map is not only reminiscent of Rip Van Winkle, but also of those scenes in war movies showing the operational HQ, inevitably furnished with a large cartographic depiction of the theatre of war, across which secretaries are pushing symbolic depictions of friendly armies and enemy battalions.

Vanity Fair has published some revealing letters from the young student Barack Obama to his girlfriend Alex McNear.  Some conservatives have been mocking the heck out of them as evidence […]