GPS technology is opening up exciting new hybrid forms of mapping and art. Or in this case: cycling, mapping and art. The maps on this page are the product of Michael Wallace, a Baltimore-based artist who uses his bike as a paintbrush, and the city as his canvas. 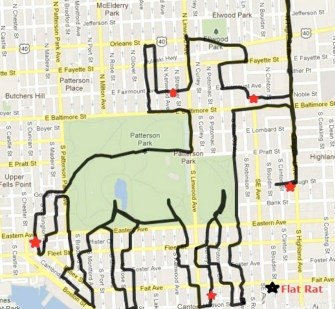 As Wallace traces shapes and forms across Baltimore’s street grid, the GPS technology that tracks this movements fixes the fluid pattern of his pedalstrokes onto a map. The results are what Wallace calls GPX images, or ‘virtual geoglyphs’ [1].

These massive images, created over by now three riding seasons, “continue to generate happiness, fitness and imagination through planning the physical activity of ‘digital spray-painting’ my ‘local canvas’ with the help of tracking satellites 12,500 miles above.”

Wallace’s portfolio by now is filled with dozens of GPX images, ranging from pictures of a toilet to the Titanic. They even include a map of the US – traced on the map of Baltimore. How’s that for self-reference? Or for Bawlmer [2] hubris? 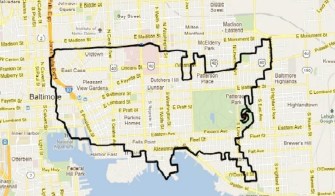 Mr Wallace’s project is not entirely unrelated to an analog, non-GPS project discussed earlier on this blog. The Norwegian Cartozoological Society [3] stares at city maps long enough until they find the contours of animals, which are then highlighted on their website [4]. It is also reminiscent of a post about a globe-spanning, GPS-powered self-portrait [5].

But neither of those projects possess the satisfying three-stage combination of mental planning, physical exercise and artistic joy that Mr Wallace’s project holds. Each map is accompanied not just by the artwork’s name, but also by the meticulous annotations of the fitness aficionado: ‘Blue Note’, 5.94 miles –> 57 minutes 47 seconds; or ‘Pagoda!’, 11.43 miles –> 1 hour 52 minutes 53 seconds.

The patterns of Wallace’s work are unlike anything you would normally choose for a bike ride.  It must be a very interesting feeling, doubling back on busy roads in the knowledge that you’re constructing a giant basketball hoop; or circling the roads around Patterson park to trace the wheels on a big rig. 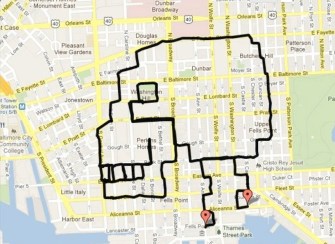 As some commenters to Mr Wallace’s website noted, tracing shapes across maps is not a new concept; in Paul Auster’s New York Trilogy, a character traces letters across New York in a similar fashion (but without GPS).

Wallace invites the visitors to his website to “jump in and contribute to this fledgling concept”, an invitation we’re very happy to amplify with our own request for your own ‘virtual geoglyphs’. If you have a bike, mastery of GPS technology and are curious to see how far your geoglyphing will take you, don’t hesitate to send in the results; the best examples will be published in a future post…

Many thanks to Danielle Gielen for sending in this story; original context at Mr Wallace’s website, WallyGPX.

[1] ‘Actual’ geoglyphs are images with artistic and/or ritual significance that are permanently traced across landscapes. Famous examples include the Nazca Lines in the desert of Peru and some of the (many) figures carved into English hillsides, such as the Uffington White Horse and the Cerne Abbas Giant.

[2] Baltimore pronounced by Baltimoreans (or is that Baltimorese?)

[4] The site has been dormant for some time – the last post was in early June of last year. Considering that cartozoology was conceived in 1974 but the NCS only founded in 2003, maybe its founders are merely slow rather than expired.

[5] The ‘world’s biggest portrait’ was an art project of such high-concept calibre that it never really happened. See #277.

Bryan Sykes is the author of DNA USA, which documents his journey across America, Easy Rider style, as he describes it, to record a genetic portrait of the nation. What […]