Some maps are beautiful because of their rich complexity. Others capture our attention because they are so starkly simple.

Cartography has the curious capacity to bypass a map-reader’s critical function when conveying information, and never more so than when a map is plain and simple. Two examples treated earlier on this blog spring to mind – also because they’re quite funny: the Jesusland map (#3), and the New Simplified Map of London(#199).

Jesusland is based on electoral data, the Simplified Map on a more subjective idea of wealth distribution. But both communicate a sentiment rather than merely solid data. The map shown here is less editorial, but the information it presents is equally stark.

This map reflects the number of heavy metal bands per 100,000 inhabitants for each country in the world. It codes the result on a colour temperature scale, with blue indicating low occurrence, and red high occurrence [1]. The data for this map is taken from the extensive Encyclopaedia Metallum, an online archive of metal music that lists bands per country, and provides some background by listing their subgenre (Progressive Death Metal, Symphonic Gothic Metal, Groove Metal, etc).

Even if you barely know your Def Leppard from your Deep Purple, you won’t be surprised by the obvious point of this map: Scandinavia is the world capital of heavy metal music. Leaders of the pack are Finland and Sweden, coloured with the hottest shade of red. With 2,825 metal bands listed in the Encyclopaedia Metallum, the figure for Finland works out to 54.3 bands per 100,000 Finns (for a total of 5.2 million inhabitants [2]). Second is Sweden, with a whopping 3,398 band entries. For 9.1 million Swedes, that amounts to 37.3 metal bands per 100,000 inhabitants.

The next-hottest shade of red is coloured in by Norway [3] and Iceland. The Icelandic situation is interesting: with only 71 bands listed, the country seems not particulary metal-oriented. But the total population of the North Atlantic island is a mere 313,000. Which produces a result of 22.6 metal bands per 100,000 inhabitants. That’s almost the double, relatively speaking, of Denmark, which has a score of 12.9 (708 metal bands for 5.5 million Danes)

The following shades of colour, from dark orange to light yellow, are almost all found in North America, Europe and Australasia. A notable addition to this list of usual suspects are Israel, and the three countries of Latin America’s Southern Cone: Chile, Argentina and Uruguay.

Some interesting variations in Europe: Portugal is much darker – i.e. much more metal-oriented – than its Iberian neighbour Spain [4], and Greece is a solid southern outpost of metal on an otherwise wishy-washy Balkan Peninsula.

On the other side of the scale, light blue indicates the worst – or at least loneliest – places to be a metal fan: Papua New Guinea, North Korea, Cambodia, Afghanistan, Yemen, and most of Africa outside its northern and southern fringe. According to the Encyclopaedia Metallum, there isn’t a single metal band in any of those countries [5].

An intriguing category are the first greens next up on the colour scale. They mark out the places where metal bands are present, but in the smallest of numbers. In southern Africa, five countries [6] come up (listed below with band names and [genre]).

Other lands were metal is extremely marginal – yet present – include:

And then there are the countries where you wouldn’t expect a flourishing metal scene, but that nevertheless have one. What about the 140 metal bands of Bolivia? Iran’s 42 listed metal bands include such fantastically named bands as 1,000 Funerals, Beaten Victoriouses (sic), Tenebrous Shadow, and Zakhm. Even hyper-strict Saudi Arabia has 12 entries in the Encyclopaedia Metallum.

Many thanks to Tino Frey for sending in a link to this map, found here on a blog named Copyranter. If you are disoriented by the multitude of genres that are assembled under the general heading ‘metal’, check out the Map of Metal (see screenshot below). Many thanks to Jason Tinkey, Scott C. Broussard, David Koch, and Eric Boros for sending that in. 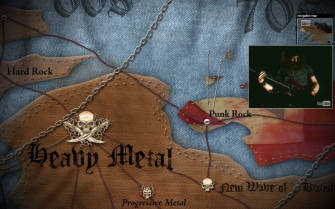 [1] We intuitively associate blue with cold and red with hot – see the faucets in hotel bathrooms – but ironically, this is contradicted by the so-called blackbody theory in physics, where blue occurs at higher temperatures, and red at lower ones. A beautiful variation on the use of colour temperature as a map key was discussed in #371, charting the advance of the sakurazensen (cherry blossom front) in from Japan’s south to its north.

[2] Population data varies by source and date. In March 2012, Finland’s Population Register Centre announced a number of inhabitants in excess of 5.4 million. The older data on this map was taken from the CIA World Factbook, which was the source for all other population figures used here. The difference with the upper limit on the map’s scale (i.e. 53.2 bands/100K inhabitants) may result from an intervening change in the number of bands listed for Finland.

[3] The large, red-coloured archipelago to Scandinavia’s north is Svalbard, a part of Norway.

[5] Really? No metal band called Heart of Darkness in the Democratic Republic of the Congo? Well – apparently there is one (1) metal band in the DRC, but the map doesn’t reflect that. Perhaps a recent addition? The comments section below the map’s original context notes a similar omission: even Afghanistan apparently has a metal band now…

Inspired by the group behaviors of simple animals, a team of roboticists has developed a new way for swarm robots to maneuver on land.
The Past

The findings include signs of flash flooding that carried huge boulders downstream into the lakebed.
Starts With A Bang

Astronomers race to save the night sky, but will anyone listen?

An unprecedented number of new satellites threatens the night sky as we know it. Will we act in time to save it?
Neuropsych

Our minds are hyper-taxed due to hyper-tasking. We need to slow down and allow ourselves to daydream if we want to improve our attention.
Up Next

This essay was previously published on AlterNet. The death of Christopher Hitchens in December sparked an outpouring of tributes. Most of them praised his best qualities: his ferocious courage, his […]