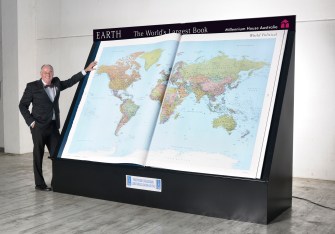 Earth Platinum – a book so expensive that it requires a dress code.

It would have taken one person 60 years of continuous working to produce this book. Fortunately, publisher Millennium House (of Sydney [3]) had an intercontinental team of 88 cartographers at hand to wrap up the job in just 4 years. Earth Platinum was printed in Italy in December 2011 and bound in Hong Kong. It is not only very up to date, but – as you would imagine – very detailed, even showing the location of shipwrecks. 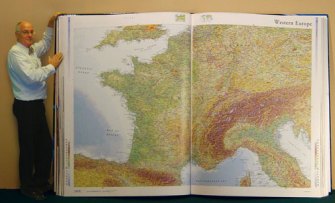 A man-sized representation of France.

Like its smaller predecessors Earth Blue and Earth Gold [4], Earth Platinum is the brainchild of Gordon Cheers, who would like the fame of his atlas to resonate through the centuries as has that of its predecessor, the Klencke Atlas [5]. This giant book, gifted to England’s Charles II by a group of Dutch merchants on the occasion of his Restoration in 1660, had been the world’s largest atlas until now, at 1.75 m (5 ft) high and 1 m (3 ft) wide. Containing 37 maps, the Klencke Atlas was on public display with pages open for the first time during the British Library’s Magnificent Maps exhibition in 2010. 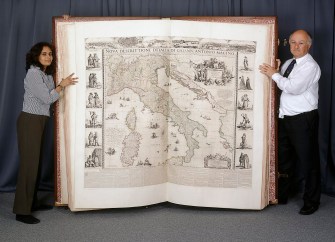 The Klencke Atlas on display at the British Library.

A few copies of Earth Platinum had been reserved from Middle Eastern countries. Before you think you’re ready to move on from your 30-kg (60-lb) facsimile of Blaeu’s Atlas Maior [6], check your cash flow: the book’s price is commensurate with its brobdingnagian [7] size, and will be yours in exchange for a hefty $100,000.

Many thanks to Massimo De Martini of the Altea Gallery for providing a picture of Earth Platinum. Other pictures of the atlas taken here and here. The Klencke Atlas image taken here from the British Cartographic Society blog.

[1] A statement by Alfred Korzybski, the Polish-American scientist and semanticist. It expresses a basic tenet of his theory of ‘general semantics’: that human knowledge of the world is structurally indirect and abstract, and as such prone to misinterpretation. In an ironic validation of Korzybski’s thesis, his statement is mainly referenced in, and usually reduced to, a merely cartographic context.

[2] Closest would be a one-on-one map, as described in Jose Luis Borges’ short story ‘On  Exactitude in Science’, in which a map of the Empire is made to the scale of the Empire, and covers it entirely. Which turns out to be rather impractical.

[3] In Australia. Before you say of course, consider the unfortunate English holidaymakers who thought they had landed near Bondi Beach, but had actually ended up in Sydney, Nova Scotia.

[5] Named after the Dutch professor Johannes van Klenck (also Klencke or Klenckius). It may have been part of the so-called Dutch Gift, provided to Charles II when he left the Netherlands to resume the English throne, in order to mollify him with regards to ongoing and future negotiations regarding trading and fishing rights. It consisted of, among others, a yacht, tapestries, a bed, Italian and Dutch paintings, and 12 statues.

Perhaps wormholes will no longer be relegated to the realm of science fiction.
Up Next

Read Part 2 here.I’ve talked about the weather, the crowds, the protesters and the speakers, and I wanted to end up with some overall impressions. One of the things about […]