Why travel all the way to Italy when you can visit a place much closer by that is shaped like Italy? That is the alluring ruse proposed by this poster, created in 1907 by Arthur Gunn for the Great Western Railway. Gunn’s work was meant to inspire an exodus of holidaymakers from Paddington [1], the GWR’s London terminus, to the sunny southwest of England served by its trains: the so-called Cornish Riviera [2].

On Gunn’s poster, two cartographic inserts pair Cornwall with Italy as the two legs of a particularly knock-kneed, yet high-heeled, map creature. The legends are carefully arranged to heighten the sense of symmetry: Atlantic matches with Adriatic, the English Channel with the Mediterranean. 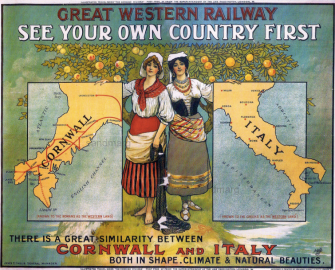 At least some of the tourists looking out over Mount’s Bay must have found its equivalence with the Gulf of Taranto pleasing, and those holidaying near Land’s End could dream they were on the Salento peninsula [3] instead. Would any visitors to Bude Bay have looked for a Venetian-like lagoon near its shore?

But the extended comparison is only tenable because Mr Gunn had taken some serious liberties with the geographic facts on the ground. First of all size-wise: Italy is over 80 times bigger than Cornwall [4]. But also shape-wise. The coastline has been moulded to enhance the perceived resemblance. Take the ‘toes’ of both legs: Cornwall’s Lizard peninsula in reality is much more rounded, and Italy’s Calabrian region slightly more pointy than shown on these maps.

Other, exo-cartographic elements are brought to bear on the Italo-Cornish parallel. Two maidens, each dressed in local garb, represent the finest flower of local womanhood – both wearing silly capes but in the case of Cornwall also barefoot clutching a fishnet.  The trees behind them bear the fruits of their respective homes [5].

If all that is not enough to convince you to holiday by simile, the slogans will get you there: There is a great similarity between Cornwall and Italy in shape, climate & natural beauties. The top one, a contemporary version of the presently popular ‘Buy British’ slogan, reads: See your own country first. Going overseas for the holidays? You’re this close to treason!

This map seen in Mark Ovenden’s Great Railway Maps of the World – a gorgeous book if you like maps or trains, an indispensable one if you like both. Image taken from this page at Etsy.com.

[1] Paddington station houses a statue of Isambard Kingdom Brunel, the legendary engineer who not only built many still-famous landmark bridges, but also founded the GWR (nicknamed Great Way Round for the often circuitous course of its routes).

[3] The Solento peninsula is the southern end of the region of Apulia. Both it and Land’s End represent the ‘heels’ of their respective shoes.

[5] Apples and oranges. But you shouldn’t compare those!

The Start-Up of You: A Blueprint for Success in the Knowledge Economy

You should treat your life as if it were a start-up business.