In 1960, feeling he might not be long for this earth, John Steinbeck decided to travel across the length and breadth of America for one last time. The celebrated writer of East of Eden, Of Mice and Men, and Grapes of Wrath set out from his Long Island home aboard Rocinante [1], his specially built camper van, and accompanied by his French poodle, Charley. In 1962, he published Travels with Charley: In Search of America.

The end papers of the book, which would turn out to be Steinbeck’s last original work published during his lifetime, were illustrated with this map of America, detailing the itinerary and some of the incidents of Steinbeck’s travels with Charley [2].

Steinbeck, Rocinante and Charley travelled the US in counterclockwise direction, on a roughly 10,000-mile-long trip that saw them passing through New England to the top of Maine, then via Niagara Falls along the Canadian border, hitting Chicago and continuing on to Seattle by way of Fargo before turning south towards the Salinas Valley, backdrop of Steinbeck’s youth. The trio completed their circumambulation via Texas, New Orleans and a huge chunk of the Deep South. 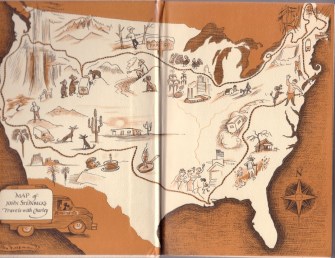 Steinbeck’s travelogue is a State of the Union of sorts, but not in the obligatory upbeat tradition of the President’s annual address. The writer is disheartened by the technology-driven pace and direction of social change in the United States and laments the country’s blandness, fearfulness, homogeneity and wastefulness.

Perhaps this says as much about the writer as his subject: Steinbeck was ill, and reportedly quite depressed, when undertaking his trip. That the trans-American trek didn’t quite manage to recapture the wine of Steinbeck’s youth might explain some of the sour grapes in the book.

Contrast this map with a similar one, posted earlier on this blog: Jack Kerouac’s 1947 cross-country hitchhiking round-trip (#98). Kerouac followed a slightly less border-hugging route, but both trajectories are more than passingly similar: starting and ending in New York, passing through Chicago on the way out to California, following the west coast south before returning east. 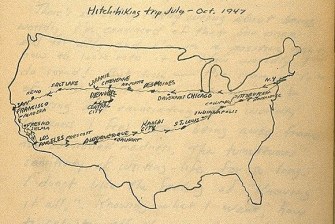 But Kerouac’s trip became the basis for a different kind of book: On the Road, a lyrical, stream-of-consciousness tribute to America. His travelogue became the bible of the Beat generation.

Why that difference in tone and outlook? Was America that more homogenised in 1960 than in 1947? Was Steinbeck just more into farm labourers than jazz musicians? Or is it because Kerouac was young and Steinbeck was old?

Steinbeck’s book shot to the number-one spot on the NY Times Bestseller list; a few months later, he was awarded the Nobel Prize for Literature (though not particularly for this book, to be clear). In later years, scholars cast doubt on the veracity of many of the quotes, and even some of the anecdotes in Travels with Charley. Even Steinbeck’s son John Jr. expressed his doubts [3]: “He just sat in his camper and wrote all that [expletive].”

[1] After Don Quixote’s horse. The restored van is now on show in the Steinbeck Center in Salinas, California.

[2] The book was named after one of Steinbeck’s favourite travelogues, R.L. Stevenson’s Travels with a Donkey in the Cévennes.

Our current form of education is almost 200 years old. What should schools of the future look like?
▸
6 min
—
with
Salman Khan
Up Next

What’s So Funny About Modern Art?

Modern art takes itself much too seriously. Even the Pop artists often took the fun out of whatever they touched—a reverse Midas touch rendering even comedy gold into dross. Andy […]