To be or not to be Scandinavian, that might be the question soon enough for Scotland, if it decides to become independent. For the time being, Scotland is still a part of the United Kingdom, as it has been since the Acts of Union in 1707. But with the Scottish National Party firmly ensconced in Holyrood [1], a referendum on independence is on the horizon – by 2015 at the latest.

Even though both sides have recently rowed over how binding such a referendum would be, it is hard to see how the British government of David Cameron [2] could deny Alex Salmond’s Scottish one the fruits of a clear victory for the Yes camp. Opinion polls show no Scottish majority (yet) for independence – the closest ones falter at around 38% – but Cameron’s ham-fisted handling of the referendum row surely must have added a few votes to Salmond’s cause.

So what happens if they win? 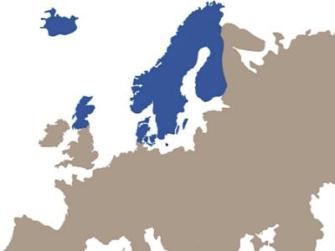 Well – this map suggests that Scotland could go Scandinavian, first and foremost by the sheer power of Gestalt psychology. Our brain seeks out wholeness from the sensory fragments it constantly processes, so a bunch of territories shaded in the same hue of blue: they must belong together.

It’s a trick that worked well for the British Empire at its height. The pink swathes on this world map contrast with the monochrome white of the rest of the world’s land mass, and what’s more: they contrast together. Rather than just seem really, really far away from each other, Australia and Canada seem to balance each other out, each equally pink on their opposite sides of the world [3].

But a Scandinavian Scotland has more going for it than this blue on this map, and our wired-for-holism [4] brains. There’s also geographic proximity, shared access to the same body of water, and the resultant multitude of historical links between Scotland on the one side, and Iceland, Norway and Denmark on the other. (There’s been less interaction with the slightly more distant Swedes and Finns). Lerwick, the capital of the Shetland Islands, is closer to Bergen in Norway than to its capital Edinburgh. It’s also the location of Up Helly Aa, an annual fire festival to mark the end of Yuletide that has a distinctly Viking-y feel to it [5].

This map was taken from the Copenhagen Post, an English-language Danish newspaper [6]. The accompanying article mentions a few more similarities: both Scotland and Scandinavia harvest fish and renewable energy from the sea, both sides of the North Sea share some vocabulary (Scots call their children bairns, Norwegians and Swedes call them barn, Danes børn), and both have an outlook infused by similar brands of anti-hierarchical Lutheranism. Significantly for a small nation considering independence: Scotland, Norway and Denmark all have about 5 million inhabitants. Small numbers don’t seem to be an impediment to successful statehood.

But the main attraction for a Scotland savaged by assaults on its social institutions: the fabled Scandinavian welfare state, with its state-funded cradle-to-grave care system. What’s remarkable is less that this system is under pressure and being privatised in Scandinavia itself, than the fact that it holds such sway over the Scottish imagination at all. Perhaps it’s that Lutheran connection. Or maybe it’s just another way for the Scots to distinguish themselves from the Tories, who hold sway in England [7].

One final, crucial advantage of a Scandinavian over a British Scotland: it would no longer be in the Far North of the UK, but in the Southwest of the Scandinavia. The place would not have to move an inch, but it would sound less cold, dark and at the end of everything [8]. Scotland’s new orientation could finally allow it to ditch some of the negative stereotypes that have been dogging it for far too long. It would no longer be colder, emptier and darker than England. It could be as socially sophisticated and as technologically advanced as Denmark or Norway.

Will Scotland ever become so Nordic that Macbeth will be called the Scandinavian play? For as powerful as the pull towards independence might seem, another holistic paradigm is at work: the political division of islands is most often seen as a bad thing, something to either be prevented (e.g. Sri Lanka) or to be overcome (e.g. Cyprus). To quote the Bard himself:

“If you can look into the seeds of time,

And say which grain will grow, and which will not,

[1] The Edinburgh neighbourhood that is the location of – and hence a metonym for – the Scottish Parliament. It was reconstituted following a succesful referendum in 1999 on political devolution for Scotland from Westminster (another metonym, this time for the London area in which the British Parliament is located).

[2] A very Scottish name – but then the English have complained for centuries that they’ve been governed by Scots.  Gordon Brown, the previous PM, was born, elected and lives in Scotland. Tony Blair, Brown’s predecessor, was born in Edinburgh of partly Scottish stock, and spent part of his childhood in Glasgow. Says Francis Urquhart, the (fictional) prime minister in the tv series To Play the King (1993), to his king: “My family came south with James I. We were defenders of the English throne before your family was ever heard of. It is to preserve the ideal of a constitutional monarchy that I now demand your abdication.”

[3] The pink-holistic view of the British Empire is a powerful one, even when most of it is gone: ‘The Last Pink Bits’ is a 1997 book by Harry Ritchie, examining what remains of the Empire map.

[4] Some would say that Scotland’s favourite kind of holism is alco-holism. This blog of course does not endorse such stereotyping.

[5] Young men, mostly dressed up in horned helmets, carry torches through the streets of Lerwick, tossing them in a longboat, which eventually goes up in flames. Sounds ancient, but originates in the 1880s. Most recent edition: 31 January 2012. More info at the Up Helly Aa website.

[7] Only 15 out of 129 Members of the Scottish Parliament are Conservative. Labour has 37 MSPs. The SNP (69 MSPs) is nationalist, but left-leaning.

[8] The standard British expression to describe the length and breadth of the land is: from John O’Groats to Land’s End. The latter is the extreme southwest of the British landmass. The former is the northeastern extremity of mainland Scotland.

Liberal Education for the Twenty-First Century

Our competencies, unlike philosophy or theology or poetry, disconnect the method from the end, and that means they’re disconnected from liberal education.