Where is this? The question is simple enough, and in a non-metropolitan environment, the answer may be correspondingly unambiguous. But in large cities, where the flow of human traffic is fast and vast, place names are fluid. They change over time, and expand or contract according to the ebb and flow of populations, professions and reputations.

Few Italians remain in the Lower Manhattan neighbourhood once known as Little Italy [1], for example. Most of the area – and the toponym – has been swallowed up by an expanding Chinatown. Part of the late Little Italy has been renamed Nolita (“North of Little Italy”). The new name was a conscious re-branding of the area to lure in yuppies, who migrate in packs, but only feel safe in neighbourhoods with portmanteau names [2]

Much of this rebranding is thought up by city marketing firms. Give something a trendy name, the thinking goes, and the trendy people will follow. With a  bit of luck, they’ll be followed by the filthy rich people [3], bringing all their money. That’s the best possible outcome for urban rebranding: a location has been turned into a destination.

But urban toponymy is more than a crude tool for those looking to profit from it. It also seems to have a mind of its own: place names acquire and relinquish territory according to the rise and fall of their visibility and influence.

Under the giant dome of the singular metropolitan brand name, it’s very difficult to draw exact demarcations between its myriad constituent quarters, zones and microneighbourhoods.

This has been getting on Euan Mills’s nerves. He lives in London. But London’s a big place. He’d like to think he lives in Dalston, East London. But opinions vary on where exactly that is – even in and around Dalston itself. 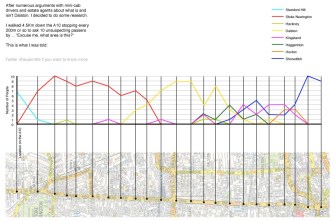 “After numerous arguments with mini-cab drivers and estate agents about what is and isn’t Dalston, I decided to do some research,” Mr Mills writes. “I walked 4.5 km down the A10, stopping every 200m or so to ask 10 unsuspecting passers-by… ‘Excuse me, what area is this?’”

He then distilled that simple sampling of topographic opinion into a map that brilliantly displays the ebb and flow of neighbourhood monikers along three miles of the A10, which runs in a straight line through the area, from north to south. The road itself changes names half a dozen times along the way: from Stamford Hill in the north, over Stoke Newington High Street, Stoke Newington Road, Kingsland High Street, Kingsland Road, and Shoreditch High Street in the south.

What were the results of Mr Mills’s research?

Bolded names were mentioned by at least half of the respondents – as shown below.

This map on a website by Euan Mills, called thisisntf***ingdalston.co.uk[4]. Earlier posts on area names in New York City to be found here and here.

[1] There are (or were) dozens of other Little Italys across the world, from Göteborg to Mexico to Liverpool.

Can We Import Our Exports? Three Quick Questions

There’s a refrain amongst the din of school reform talk today that goes something like this: We could learn a great deal from the educational systems of other countries. Finland […]