How is your ‘tache hanging? As Movember [1] is drawing to a close, this might be a good time to examine the tenuous, yet undeniable and intriguing overlap between cartography and facial hair.

Exhibit A: take a look at any picture of any great cartographer. What do you see? Beards and moustaches. Ptolemy? Check. Mercator? Check. Blaeu? Check. Arno Peters? No beard, no ‘tache. Check. 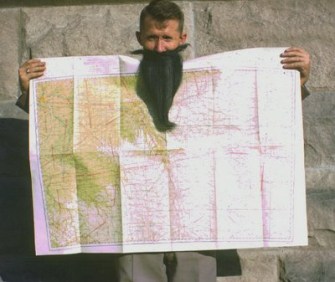 Exhibit B: this literal overlap between cartography and follicular outgrowth, as demonstrated by the astronomer Frank K. Edmondson (1912-2008). Edmondson created the Indiana Asteroid Program, was treasurer of the American Astronomical Society and president of the Minor Planet Commission of the International Astronomical Union (1970-1973). More importantly in this context, he provided the inspiration for the Beard Raisers Club at Kirkwood Observatory (University of Indiana).

Exhibit C: a map of the US showing adjectively (and subjectively) which manly character traits may be enhanced by sporting a beard. Those traits relate to their location on the map. New Yorkers will look more Rip Van Winklely with a facial add-on of hair. Georgians will appear more gentlemanly. Utahns will seem more Mormonly. The map is an extrusion of The Beardly, a blog best described as promoting ‘Beard Pride’. Some slogans, to give you a feel:

A few of the dictums listed on the website point to the intense rivalry that marks the world of facial hair, the eternal arguments for and against beards and moustaches, the Montagues and Capulets of this particular subculture. If you’re a real beardie – growing everything between the nose and the Adam’s apple, preferably to prophet-length – you’ll look down on anyone who does anything less. Sideburns, in the words of The Beardly, are two sad tombstones to what might have been. Inversely, if you’re an aficionado of the goatee, a proud owner of a handlebar moustache, or passionate about your mutton chops, you’ll consider these full-on beard-growers to be latter-day Rasputins, insincere and unstable beirdos.

It is sad to see so much infighting among the non-shaven, especially as to the clean-shaven, they’re all the same: not to be trusted.

A regular appendage of US presidents of the latter half of the 19th century, facial hair has since fallen out of favour. The last American president to sport a full beard was Benjamin Harrison (1889-1893), the last one with a moustache was William H. Taft (1909-1913) [2]. Either option now casts a pall of suspicion over any prospective presidential candidate. Could you imagine anyone seriously contending with a goatee, a fu manchu, or even a soul patch?

This follical fall from political favour is not limited to the capitalist/democratic system. In communism as well, beards or ‘teaches were once de rigueur, worn by theoreticians (Marx), revolutionaries (Lenin) and dictators (Stalin). Even now, in the winter of his life, Fidel Castro still clings to the wispy residue of his once-beaming iron curtain of a beard. But the official Moscow line on beards changed somewhere in the late 1950s or early 1960s. The Soviet New Man was to have a naked chin. Beards were suspect: considered bourgeois, revisionist, counterrevolutionary.

Perhaps initiatives like Movember will help recalibrate our feelings on beards and moustaches. And maybe this map – Exhibit D – will allow the owners of as yet hairless chins and lips to choose and grow the follical vegetation of their choice. This map of facial hair may seem only marginally rooted in cartography, yet it continues the great tradition of symbolic itinerary maps – not unlike some that have been discussed earlier on this blog [3]. 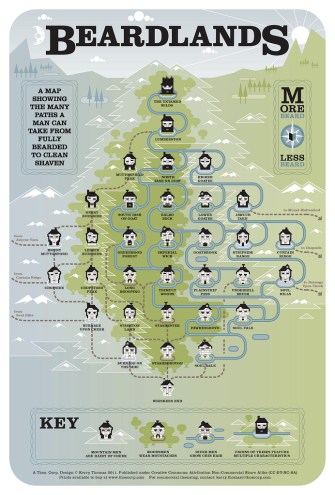 This is a map of Beardlands, purporting to show the many paths a man can take from fully bearded to clean-shaven. Each of the 33 hair styles is represented by a timberframe house resembling a male face, arranged from completely ivy-covered (fully bearded) in the north, to entirely ivy-free (clean-shaven) in the south.

Each location is named to sound both like a place-name and a hairstyle. Many paths may be walked from the untamed wilds to whiskers end. Choosing the road that consists of an ever greater shaved area radiating from the chin, we pass via Muttonfield Park and Great Burnside to either Mount Muttonford or Lesser Burnside, and thence to either Chopside or Chopstash Peak. Both routes converge again at Burnage-upon-Cheek, continuing through Burnage-on-the-Side.

Choosing the opposite course – leaving the chin patch unshaven as long as possible – leads us from Lumberston and North Tash-on-Goat via Balbo Beck and Goatbrook and Plainstrip Pass to Soulvale. Among other possible routes.

I wonder if a similar map might not be possible for that other process of male hair differentiation, playing out slightly more to the north, and slightly less voluntarily: the patterns of male baldness.

Many thanks to John O’Brien and Gabriel Simunek for sending in these maps, found at The Beardly and here at Poorly Dressed. Picture of Frank K. Edmondson found here at Dr Robert R. Brownlee’s blog, Becoming What We Are.

[2] Can you name all five presidents with beards? All four with moustaches? For this and more on the fascinating relationship between the presidency and facial hair, see here.

The genes responsible for facial features may also influence behavior.
Up Next
Floating University

The Value of Forgotten Ideas

In his Floating University lecture, Dr. Jeffrey Brenzel shows how our intellectual history is the story of rediscovering old ideas, and how these ideas will help you address permanent aspects of the human condition.