The maps discussed on this blog are rarely of any hard, practical use. This one does have real-world relevance – especially if you’re a globetrotting, It’s-Tuesday-so-this-must-be-Belarus kind of traveller.

Living and working in Country A, your locally-bought electrical and electronic devices will have a plug that fits the local sockets. This correspondence is so self-evident that you don’t even think of it.

But then business or pleasure transports you to country B, where electrical sockets are configured differently. Your electric razor won’t work, and once the batteries are dead, you’ll be laptopless and unphoneable (1). Just picture yourself – unshaven and unreachable, stranded in an analog desert. That is what the 1970s must have been like.

If you want to avoid being left to your own devices, you’ll want to buy one of those travel gizmos they sell at airports – a cross between an adaptor plug and a Swiss army knife. These little plastic boxes will unfold into any combination of plug and socket to be inserted in between the plug on your machine and the local electrical sockets. 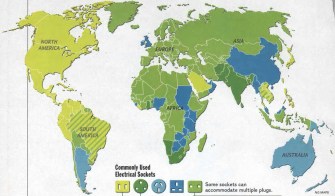 For some useful background, see this handy map, showing the world’s five common types of electrical sockets. On this map, these five socket types constitute as many zones of plug-and-socket compatibility, each rooted in political, colonial and economic history – but none corresponding quite exactly to any existing supranational bodies; an alternate arrangement of the world community not unlike the map of driving directions discussed earlier on this blog (see #76).

Here’s an overview of the world’s elusive ‘electrical communities’, as defined by the socket models they use:

This map, sent in by Mark Lakata, was first published in National Geographic. It chooses clarity over comprehensiveness: in reality, there are 13 plug-and-socket systems in operation throughout the world (some are compatible with each other), and numerous national standards for voltage and frequency.

(1) Released from the tyrannical glare of your computer screen, you could consider a visit to that diametrical opposite of the Starbucks café, the laptopless bar.

(3) i.e. all those not included in the ‘subcontinental’ or ‘imperial’ models.

(4) Surinam, Bolivia, Paraguay, Uruguay and Chile. French Guyana is not a country, but a dependency of France. The ‘European’ model shares Brazil with the ‘American’ one.

The paleolithic diet movement is starting to take hold in Europe, as the first restaurant serving food fit for a caveman opened in Berlin. The restaurant, a former brothel called […]