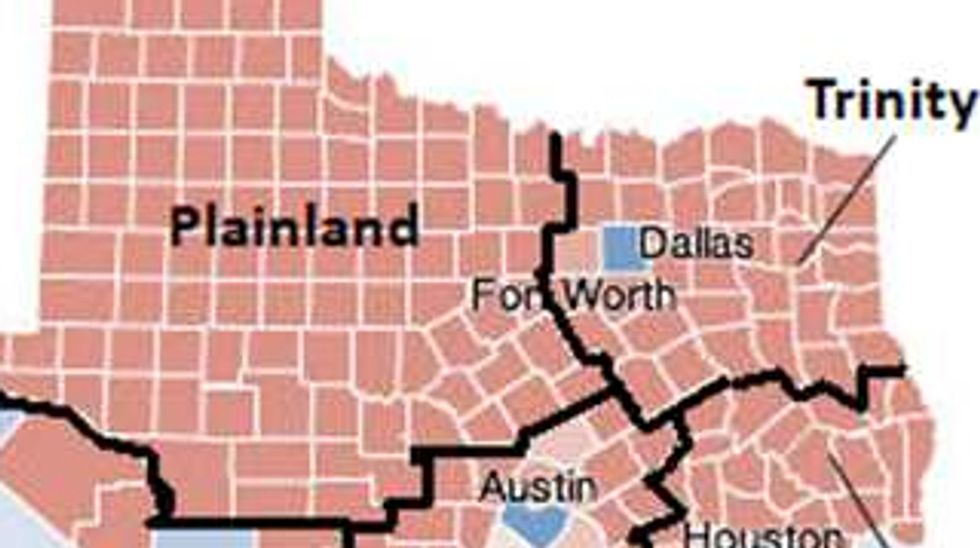 The plural of Texas? My money’s on Texases, even though that sounds almost as wrong as Texae, Texi or whatever alternative you might try to think up. Texas is defiantly singular. It is the Lone Star State, priding itself on its brief independence and distinct culture. Discounting Alaska, it is also the largest state in the Union.

Texas is both a maverick and a behemoth, and as much an claimant to exceptionalism within the US as America itself is on the world stage. Texans are superlative Americans. When other countries reach for an American archetype to caricature (or to demonise), it’s often one they imagine having a Texan drawl: the greedy oil baron, the fundamentalist preacher, the trigger-happy cowboy (1).

Texans will rightly object to being pigeonholed, but they probably won’t mind the implied reference to their tough-guy image. Nobody minds being provided with some room to swagger. See also the popularity of the slogan Don’t Mess With Texas, the state’s unofficial motto. It is less historical than it sounds, beginning life only in 1986 as the tagline of an anti-littering campaign.

You’d have to be crazy to mess with a state that’s this big and fierce. In fact, you’d have to be Texas to mess with Texas. Really. That’s not just a clever put-down. It’s the law. When Texas joined the Union in 1845, voluntarily giving up its independence, it was granted the right by Congress to form “new States of convenient size, not exceeding four in number and in addition to the said State of Texas.”

This would increase the total number of Texases to five, and enhance their political weight - at least in the US Senate, which would have to make room for 10 Senators from all five states combined, as opposed to just the twosome that represents the single state of Texas now.

On May 26, 1930, TIME Magazine reported on one of the periodical bouts of Texas Divisionism that have gripped the state ever since its annexation:

As other States were last week gloating over population increases which, by reapportionment next year, would give them greater political strength in the House of Representatives, Texas, biggest of them all, pointed with huge pride to Pampa as a sample of its own spectacular growth. In 1920 Pampa, high in the Panhandle, had 987 inhabitants. This year, thanks to oil and energy, it was found to be a full-fledged city of 10,453, a population increase of 959% in a decade. The disclosure of Pampa's spurty growth came just 24 hours after Texas' Congressman John Nance Garner, Democratic Leader of the House, had made a proposal which, if ever executed, would be far more subversive of U. S. political divisions than any readjustment of House representation consequent to the Census.

Leader Garner declared that the time had come to carve five States out of Texas. Purpose: "To transfer the balance of political power from New England to the South and secure for the Southern States . . . prestige and recognition." What moved Representative Garner, as a Texan, as Minority leader of the House and as a member of the House Ways & Means Committee, to advocate this major change was the apparent victory of the industrial Northeast over the South & West in the Hawley-Smoot Tariff Bill. If the Lone Star State were changed into a constellation of five, Mr. Garner foresaw eight additional Democratic Senators from the four new States — enough to overwhelm Grundy-Republican-Tariffism. And incidently, under the Garner plan, what is now Texas would cast 28 electoral votes for President instead of 20. The mule-like kick in Mr. Garner's threat-proposal lay in the fact that Texas can turn itself into five States whether or not the rest of the U. S. approves […]

So immense is Texas (265,896 sq. mi.) that few persons can conceive of its size. It takes as long by train to travel from the Panhandle on the north to Brownsville on the south as it does to go from New York to Key West. Leader Garner gave his own figures: "Texas would make 220 States the size of Rhode Island, 54 the size of Connecticut, six the size of New York. Texas is four times bigger than the combined New England States. . . . With an estimated population of 5,600,000 Texas ranks fifth among the States, being exceeded only by New York, Pennsylvania, Illinois and Ohio..." Such a split-up of Texas into five States the size of Arkansas fired Mr. Garner's political imagination. He foresaw an East Texas, West Texas, North Texas, South Texas and just plain Texas in the middle. New State capitals would blossom on the mesa. Political jobs would increase fourfold. Every U. S. flag would be rendered instantly obsolete.

So how would such a quintet of Texases look like? Over the decades, several proposals - some more serious than others - have been put forward.

In 2009, the political blog FiveThirtyEight overlaid their plan on a county-level map of the Obama-McCain presidential election results (showing Texas to be overwhelmingly red, except for a band of blue along the Rio Grande). The five Texases are:

Back in 1998, Mother Jones, in a thought experiment aimed to end the tyranny of Wyoming, dreamed up 25 new states, among which four new ones for Texas. The nomenclature for the five new states being:

The MoJo map showed some similarity with the FiveThirtyEight one. But why speculate on the names for the new states and their exact borders, when the State of Texas itself has prepared a Master Plan, right under everybody’s noses? This map, masquerading as an innocuous infographic over at the deceptively-named Texas Department of Insurance, openly flaunts the state-orchestrated divisionist plan and its nomenclature, opting for a Central, North, East, South and West Texas, each where you’d expect them. This is almost exactly as foreseen by John Nance Garner back in 1930.

One has to wonder why Texas divisionism - a political force with such clear aims, and with aims that have such potential benefit for Texans - has never come to fruition. Maybe John Nance Garner had the answer to that question all along, as TIME concludes:

But as clearly as anyone else Leader Garner saw that Texas itself will object to five Texases. The bigness of Texas is the supreme boast of every Texan. To hack the State up into five Arkansases would, to most of its citizens, be dismembering an empire. No longer could Texas brag of the fact that it grew more cotton (five million bales), produced more oil, than any other State. In such a split-up, North Texas would lose the historic glory of The Alamo (Roman Catholic mission at San Antonio cruelly besieged by Santa Anna). Bunker's Monthly, unique journal of and for Big Texas, would become just an ordinary interstate publication.

Proud columns of Texas figures would wilt away. Vainly did Mr. Garner argue: "To divide the State would in no wise detract from the glory of the past but would add to the glory of the future by reason of additional political power and the enhancement of sectional initiative. . . ." This sentimental opposition to any partition of the State the New York World described thus: "A Texan is so proud of Texas as it is he can hardly sleep at night. He boasts that if all the steers in Texas were one big steer the critter would stand with his forefeet in the Gulf of Mexico and his hindfeet in Hudson's Bay and would drink water out of the Panama Canal while brushing the flies off the North Pole with his tail."

(1) Major T.J. ‘King’ Kong, the character in Dr Strangelove who rides the nuclear bomb into oblivion as if it were a bull at a rodeo, is about as over-the-top Texan cowboy caricature as they get. He was played by Slim Pickens - a native and lifelong Californian.