“[This is] really a most imaginative way not just to map, but also to empower,” writes Thomas Theis Nielsen of the HarassMap, which plots the incidence of various types of sexual harassment in Cairo.

Sexually inappropriate behaviour is widespread in Cairo – in a recent survey, 83% of Egyptian women and 98% of foreign women reported being insulted or groped in the Egyptian capital [1]. On International Women’s Day earlier this year, a march for women’s rights in the city’s Tahrir Square descended into violence when a mob of angry men surrounded the female protesters, insulting and even sexually assaulting them [2].

For many Cairene women, sexual harassment is a daily, demeaning and demoralising occurrence. But for some at least, it is now also the starting point of a fightback, by appropriating the transformative power of social networking. 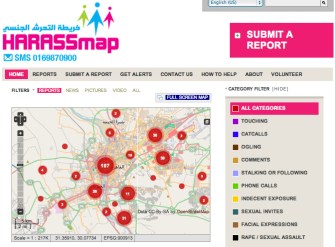 HarassMap aims to empower Egypt’s women in ways similar to the role played by Twitter, Facebook and the like in all the uprisings that together constitute the Arab Spring of 2011. To the purely social aspect, it adds the visual impact of cartography.

HarassMap is a website that amasses reports of sexual harassment, texted in by phone [3], and then plots this data on a map. The data can be traced historically (via a timeline), divided by type (from touching and stalking to indecent exposure and rape), and parsed geographically.

At a glance, this location-based angle shows which neighbourhoods are safe, and which type of harassment is most likely where (and when, thanks to the timeline feature).

Rapes, for example, are reported in the city centre, in the northeast and in the south of Cairo. As the reporting is voluntary, requires knowledge of the project, and has no immediate impact, it is likely that the data presented by HarassMap is incomplete, This raises questions about its practical value as a guide to separate “go” from “no-go” areas.

But the mere fact that HarassMap is tallying up incidents of indecency (and worse) in itself is a signal to Egyptian society at large. By quantifying these cases, the website is empowering women to take action where previously their options were to give ‘less offense’ by staying in more, or veiling up more. It also lays the issue on the doorstep of the government – and the men – of Egypt, underscoring the necessity for a change in laws, and in attitudes.

Says JD Godchaux, executive director of NiJeL, the company that developed HarassMap: “There’s nothing more powerful than seeing a map with all these points […]These are all real, these are all people who’ve taken time out of their life to send in a message to us”. [4]

While researching HarassMap, I came across a similar collaborative project, with less gloomy subject matter. It’s a project by Ben Goldacre, a British doctor who doubles as writer on dodgy scientific claims in his Bad Science column in The Guardian.

On his secondary blog [5], he writes: “I am a very big fan of nerdy day trips, from Sea Forts to abandoned nuclear bunkers, dead victorian racecourses, roads that are falling into the ground, narrow gauge railways that take you to a power station, wherever. I like decaying infrastructure, terrifying modernity, and enthusiast-run museums with 6 pages of small-font text explaining every exhibit (looking at you, Bletchley Park).” 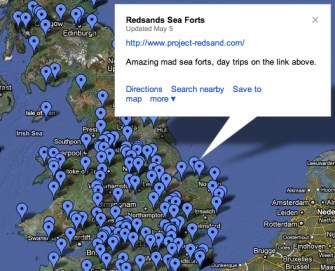 Dr Goldacre is now accepting suggestions from the public, who can enter destinations directly on a “giant, inclusive, user-generated nerd map” of Britain (and environs). The Google Map can be seen – and added to – here. It already contains such gems as:

The HarassMap, mainly in Arabic but with some English, can be found here. Many thanks to Prof. Nielsen (Dept. of Environmental, Social and Spatial Change, Roskilde University) for sending it in. He predicts: “We will see many more maps of this type in the future.”

[3] Reports can be filed via text to Tel: 0169870900, but also mailed to [email protected], tweeted with the hashtag #harassmap, or relayed through an online form on the website.

[5] Yes, secondary blog. Article here. Primary blog here. We did warn you he’s a bit of an anorak. Didn’t we?

In the wake of the Dr. King Memorial kerfuffle, I’ve been thinking more and more of how public art is a state of mind as much as a physical thing […]