The St. Michael Alignment is arguably the most prominent and intriguing of the many ley lines that criss-cross Britain. It runs in a straight line between Land’s End, England’s southwestern extremity, and Hopton-on-Sea, on the Norfolk coast. Its name derives from the many sites devoted to St. Michael that it touches or skirts on its 350-mile course – and from its orientation: the direction of the sunrise on May 8th, when the Latin liturgy celebrates… the Apparition of St. Michael.

In spite of their supposed antiquity and the bewildering multitude of associated esoteric theories, ley lines have been (re)discovered only relatively recently, and were initially described in mainly exoteric [1] terms.

The first book devoted to ley lines was The Old Straight Track (1925), in which amateur archaeologist Alfred Watkins argued for the existence in Britain of an ancient system of straight trackways that connected landscape features and prehistoric monuments. The book led to a flurry of ley line exploration in the twenties and thirties, but Watkins’ hypothenuse-rich hypothesis proved too iffy for mainstream science.

Ley line lore was rediscovered and embellished a few decades later, most notably by John Michell, whose book The View Over Atlantis (1969) was the first to discuss the St. Michael Line extensively:

“The St. Michael Line of traditional dragons sites in south-west England (…) is remarkable for its length and accuracy. It appears to be set between two prominent Somerset hills, both dedicated to St. Michael with ruined churches on their summit. These two hills are Glastonbury Tor and ‘The Mump’ at Burrowbridge some ten miles to the south-west. Both these hills appear to have been artificially shaped so that their axis align with each other, and their orientation, 27 degrees north of east, can be read off a large Ordnance Survey sheet.”

As this quote suggests, the ‘revived’ ley lines are no longer merely putative remnants of neolithic surveying; they are imbued with mystical qualities, their significance explained by or explaining such diverse phenomena as dowsing, ancient astronomy, feng shui, the Nazca lines in Peru, and sacred geography of both the Christian and pagan sort.

Esoteric theories are usually long on mysteries and short on facts. Nevertheless, the St. Michael Line does cut an intriguing trajectory across southern England. 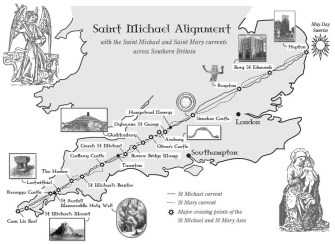 But what exactly is the significance of all of this? Why St. Michael? And what do the St. Mary Currents, shown intertwining with the St. Michael Line on this map, have to do with anything?

For his quest, the curious cartographer is rewarded with – or more likely frustrated by – elusive explanations that never quite manage to convince, but are in turn dependent by other, further mysteries. Cathedrals built on quicksand.

One could easily spend years researching the finer points of alignment lore. But instead of the final piece of the puzzle, you’re more likely to find a bigger puzzle. You could also save some of your valuable time by contemplating the following counterargument.

As knowledge in Britain of the indigenous, but recently extinct Woolworths chain of stores recedes from living memory, its reputation will undoubtedly shift from the mundane to the legendary. To aid the rapid rise of its legend, Matthew Parker produced this baffling pattern, based on the location of a dozen Woolworths stores centred on the Midlands. 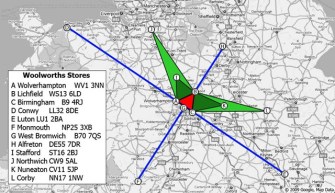 Connecting the dots between 12 former Woolworths locations, ranging from Conwy in north Wales to Luton, north of London, and Monmouth in the Welsh Borders to Alfreton, south of Sheffield, provides us with an intriguing geometric figure – so symmetrical that it simply has to be meaningful in some hidden, esoteric way…

While in fact all it proves is that it’s quite easy to produce seemingly meaningful patterns, given a large enough sample of data (in this case: the locations of over 800 former Woolworths stores).

This is a return to the original criticism of Alfred Watkins’ original ley lines theory. As writes Matthew Johnson in ‘Archaeological Theory: An Introduction’:

“Ley lines do not exist. This was shown by Tom Williamson and Liz Bellamy in Ley Lines in Question, which analysed such lines statistically and showed that the density of archaeological sites in the British landscape is so great that a line drawn through virtually anywhere will ‘clip’ a number of sites.”

Seems like sound advice, but somewhere in all of us lurks a pattern-recognisant idiot savant. The one inside me asks: What’s with all these Matthews having problems with ley lines?

[2] If you draw a straight line between St. Michael’s Mount and Mont Saint-Michel, you get another St. Michael Line. Follow this one on its southeasterly course, and you hit, successively, la Sacra di San Michele in Piemonte (a Benedictine abbey like the two aforementioned Mounts), Delphi in Greece and Mount Carmel in Israel. In the other direction lies the Irish island of – don’t tell me you didn’t see it coming – Skellig Michael. 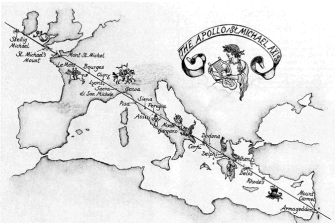 How to Win an Argument With a Vegetarian

What better topic at a conference full of carnivores than how to deal with people who think you’re completely off base, if not criminally insane?