“A perpetual holiday is a good working definition of hell”, said George Bernard Shaw [1]; in fact, just the odd few weeks of summer vacation may be near enough unbearable – what with all the frantic packing and driving, the getting lost and having forgotten, the primitive lodgings, lousy food and miserable weather, not to mention the risk of disease and unfriendly natives.

And yet, even for the bored teenagers forced to join their parents’ on their annual work detox, the horrors of the summer holiday mix with the chance of thrilling adventures, beckoning beyond the unfamiliar horizon.

Tom Gauld may well have been such a teenager, for this cartoon of his deftly expresses both the eeriness and the allure of obligatory relaxation in a less than opportune location. It evokes both the ennui of being where you don’t want to be, and the exhilarating exotism of those surroundings – as if they were an endpaper map of a Boys’ Own adventure, waiting for the dotted line of your very own expedition. 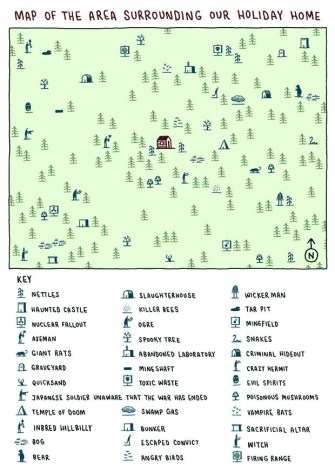 This landscape, centred on a grim little log cabin, seems a bit monotonous and desolate at first, but there’s plenty of adventure to be had here, although not necessarily of the wholesome, survivable kind.

Roaming through the scattered pines surrounding the Gauld family’s holiday home are, among other scary creatures, a witch, an axeman, and ogre, a crazy hermit, an inbred hillbilly and a Japanese soldier unaware that the war has ended. How he ended up in duelling banjo country is anybody’s guess.

Nature itself is hardly a soothing presence: killer bees, snakes, a bear, giant rats, vampire bats, poisonous mushrooms and quicksand all conspire against a the simple joy of an afternoon walk.

If that weren’t enough, the human imprint on the area is even less likely to cheer things up: a minefield, a temple of doom, a slaughterhouse, a firing range and a sacrificial altar are just some of the things probably not mentioned in the local tourist board brochure.

Maybe the safest thing to do on a holiday like this is to stay indoors, draw a map and live to tell the tale – as done by both Tom Gauld and, over a century earlier, by Robert Louis Stevenson (see #378).

Many thanks to J. Schwind for sending in this map. Mr Gauld’s fantastic work regularly appears in The Guardian. Check his website for more information, and to order prints and books of his work.

[1] in A Treatise on Parents and Children. Full text here at Project Gutenberg.

Light carries with it the secrets of reality in ways we cannot completely understand.
Up Next
Guest Thinkers

The Pale-Bearded Ghost of John Berryman Haunts Us Still

This winter, John Berryman will have been dead for forty years. That figure strikes me as strange; in many ways Berryman’s poetic voice still sounds like that of a fearless […]