What to think of others? Stereotypes provide a simple answer to that complex problem. Most such answers, to borrow one of H.L. Mencken’s bons mots, are neat, plausible, and wrong. If they do contain a kernel of truth, they often say as much about the spouters of the cliché as about its spoutees. Australians especially, separated from the rest of the western world by distance and language (1), suffer from this type of gross generalisation.

Contrary to the stereotype of the corked-hatted bushwalker, your average Australian is a city-dweller, more acquainted with indoor plumbing than with outdoor predators. Nearly 90% of the continent-sized country’s 24 million inhabitants live in cities, with over half of all Ozzies residing in no more than five of the country’s largest metropolitan areas (2).

For this urban version of Australia, we conveniently have another stereotype at the ready. Drip-fed into our collective consciousness by sempiternal soaps like Neighbours and Home and Away, this Down Under is an endless suburbia under a cloudless sky, within earshot of the ocean surf. The perfect paradise, were it not for the teenage heartbreak, family feuds and other domestic crises erupting weekly, with eerie regularity.

Surely, a genuinely local perspective will do away with these sweeping generalisations? Yes – if only to replace them with a more detailed set of clichés. No matter whether the scale is global or local, humanity always tends to divide itself into Us and the Others, reserving its most favourable opinion for the Self. These four miniature maps of Sydney do precisely that. 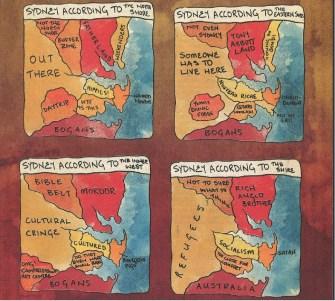 An unintended bonus: as Sydney’s geography is relatively unfamiliar outside of Australia (3), these maplets provide basic lessons in both the physical and social geography of the country’s most populous city.

The maps all show a land mass consisting of a central peninsula, bordered by two bays, next to a body of water. We may assume – safely, I would think, even without cribbing off Wikipedia – that this is the Pacific shoreline of southeastern Australia, and that the peninsula forms the core of Sydney’s metropolitan area.

The four windows on Sydney’s social geography together constitute an interesting composite image. Each miniature map is conceived as an Us vs Them landscape, but from a different perspective. Might we achieve some stereographic depth by overlapping these four admittedly very subjective caricatures?

The four perspectives provided here are, clockwise from top left: the North Shore, the Eastern Sub(urb)s, the Inner West and the Shire. Each of these zones is easily identifiable on the map, as they are the only unambiguously positive labels on each one. The North Shore is the Fatherland (top left), the Eastern Subs are Enlightenment (top right), the Inner West is Cultured (bottom left) and the Shire is, simply Australia (bottom right).

These positive labels – and the names given them in the other maps – go some way towards painting a sociological picture of the areas. Might fatherland indicate that the North Shore is a predominantly conservative and northern European enclave? Does enlightenment indicate that the Eastern Subs are awash with buddhist spiritualism? Would cultured mean that the people of the Inner West are actually well-educated enough to bother going to that fantastic Opera House? And could the simple sobriquet Australia be seen to infer that here we have to do with honest-to-god, salt-of-the-earth, archetypes of authentic – and probably quite rural – Australian life? The nomenclature Shire itself already suggests a rural setting.

It’s interesting to see how these impressions are underscored by how each area labels the others. Here’s a bit of amateur sociographic triangulation:

The North Shore, to the enlightened Eastern Subs, is Tony Abbott Land – the combative conservative who was Australia’s Prime Minister from 2013 to 2015. But to the supposedly civilised Inner West, the area is Mordor. This chimes with the tendency to caricature people more conservative than oneself as ‘to the right of Genghis Khan’. If the Shire is rural old Australia, it makes sense for them to see their better-off conservative co-citizens as their Rich Anglo Brother(s).

To the conservative North Shore, the Eastern Subs are the pits of decadence, filled with Wankers and Queens. The Inner West sees them as Bourgeois Pigs, while to the Shire they are, quite simply, Satan. Does enlightenment include burning at the stake?

The Inner West is tarred with three not totally dissimilar brushes: Hippies, Nouveau Riche and Socialism. The opinion of the Shire is entirely unanimous: Bogans. This typically Australian epithet defines someone who is lower-class, unfashionable and a bit rough around the edges. Although it is used here as a derogatory term, it can also be self-applied as badge of honour.

So what about Sydney’s other areas? Not much love for the large, tan area out west: Out There, Someone has to live there, Cultural cringe, Refugees. Is this a neglected part of the city, far out into the commuter belt – Sydney’s answer to London’s Dagenham?

The area between this bit and the North Shore is defined mainly by what it is not: Not the North Shore, Not even Sydney, Not sure what to think. Another part of the nondescript sprawl that is endemic to large cities? Maybe, but apparently a very god-fearing one, as to Inner Westerners, this is a.k.a. the Bible Belt.

The area between the Inner West and the Shire receives both praise (from hip Eastern Subbers, for their kebabs and souvlaki) and scorn (from the Inner West: Do they even have small bars?) For the Bogans of the Shire, this supposedly ethnic melting pot is Too close for comfort.

Less clear is why North Shorers would take a daytrip to an area only otherwise defined as rich in Yummy ethnic foods, and what the deal is with the Campbelltown Art Centre in the southwest. But maybe that is something that can be cleared up by Sydneyites themselves – be they Bogans, nouveaux riches, Satanists, Bible Belters. Or even Tony Abbott.

This map found here on Black Maps, a blog about Science + Comics + Politics + Maps, being the reflections of an amateur cartographer. Many thanks to the commenters pointing out that it first appeared in Tharunka, the student newspaper of the University of New South Wales. Click here for a better look at the relevant cover.

(2) Sydney, Melbourne, Brisbane, Perth and Adelaide, in descending order of magnitude, add up to more than 13 million inhabitants, well over half of all Australians.

(3) To me, at least. And I suspect that for many other non-Australians too, the mental map of Sydney is blank but for a bay, a harbour bridge and an opera house.

So I’m spending the week speaking at and otherwise participating in the national honors program of the Intercollegiate Studies Institute–a conservative educational foundation.The students are spectacularly impressive. They come from many […]