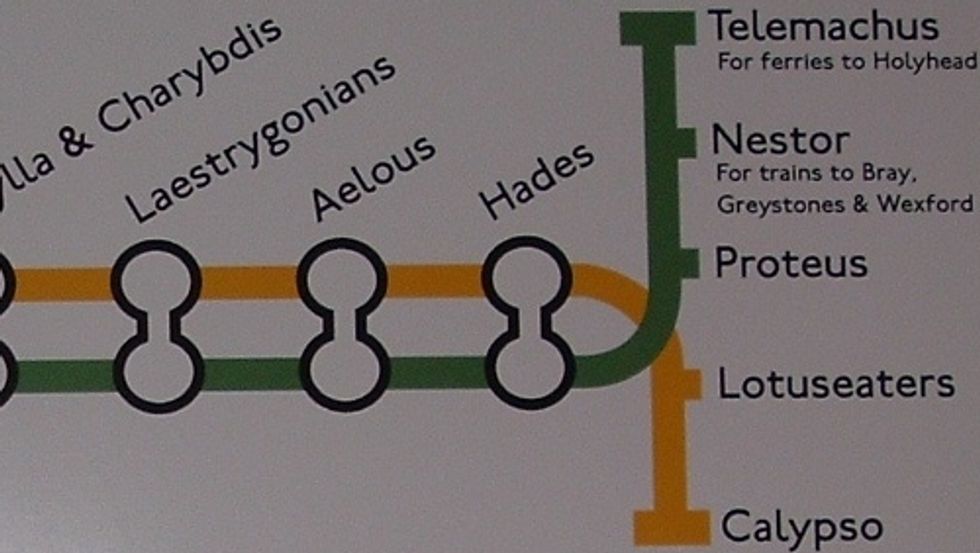 With typically Hibernian hyperbole, James Joyce once claimed that “if [Dublin] suddenly disappeared from the earth, it could be reconstructed from my book.” That book would of course be Ulysses (1922), Joyce’s masterpiece, seen by many as the most influential novel of the 20th century.

Ulysses takes place on a single day - June 16th, 1904 [1] - and focuses on the wanderings through Dublin of Stephen Dedalus, protagonist of Joyce's earlier novel, A Portrait of the Artist as a Young Man, and of Leopold Bloom, this novel’s protagonist, an early 20th-century Everyman. In the latter’s honour, June 16th is celebrated the world over as Bloomsday; in Dublin, fans mark it by retracing the itineraries and visiting the places described in the book.

Joyce’s book mirrors the structure of the Odyssey. Each of Ulysses’ 18 chapters corresponds with an episode of Homer’s classical epic, which recounts the decade-long, danger-fraught journey home from Troy of  Odysseus [2]. The juxtaposition of that Greek hero’s mythical adventures with the mundane events of Bloomsday infuses the work with a grand irony - Ulysses has been summarised, not entirely unfairly, as: "Man goes for a walk around Dublin. Nothing happens."

This map is not much help in reconstructing that walk, but it does capture the elementary narrative structure of Ulysses. And it does so in that perennial favourite of schematic itineraries, Harry Beck’s London Underground map.

The map uses the convention of referring to the chapters, unnamed in Ulysses, by their episodic counterparts in the Odyssey. The colours used for the itineraries of Dedalus (green) and Bloom (yellow) mimic those of the District and Circle lines on the London Underground, which also substantially overlap. On the Ulysses Underground map, green may also symbolise Dedalus’ Irishness, while yellow might represent Bloom’s Jewishness [3].

The first three chapters (Telemachus, Nestor, Proteus), commonly referred to as the Telemachiad, concentrate on Dedalus. The next two (Calypso, Lotus Eaters) introduce Bloom. Bloom’s and Dedalus’ paths mirror each other for the next four chapters (Hades, Aeolus, Laestrygonians, Scylla and Charybdis), after which they separate - without actually having met. For the next four chapters (Wandering Rocks, Sirens, Cyclops, Nausicaa), the narrative focuses on Bloom, who finally meets up with Dedalus in the fourteenth chapter (Oxen of the Sun). They run together for the next three chapters (Circe, Eumaeus, Ithaca), until Dedalus declines Bloom’s offer of a place to stay the night at Bloom’s home. The last, and probably most famous chapter (Penelope) is the stream-of-consciousness soliloquy of Molly, Bloom’s wife.

So the underground map is a useful guide to the book’s internal structure. But what about a map of the actual itineraries and locations in Ulysses? Considering the cultural impact of the book, such a map is surprisingly difficult to come by, at least online.

Barring offline sources (or actually reading the book, Dublin street map at hand), one of the rare useful online sources to help prepare you for a Bloomsday pilgrimage is this one, produced by Dublin Tourism. While neater than Nabokov's scribbled map of Ulysses [4], it’s still rather low-res (See link in end note for a slightly more legible version), and lacks a certain literary je ne sais quoi. And while usefully listing a whole raft of locations and routes from the book, it refers to a few outlying locations that are indicated on a larger map of County Dublin, not findable online. Some of the places shown here are:

(13) Kildare Street: National Library of Ireland (from Scylla and Charybdis)

Blooms day is still a few days off. So: Do you have a higher-res version of this map? How about other maps of Joyce's Dublin Odyssey? Best of all - are you enough of a fan/geek to have made one yourself? Please let me know; the best ones will be published here.

The Ulysses Underground map found here at the College of Humanities page at Ohio State University. It’s on view at Dublin's James Joyce Centre, which apparently does not show it on its website. Similarly, the second map of Bloomsday originated at Dublin Tourism, but was retrieved here, on a page created by Indian Joyce aficionado Malini Kaushik, describing in great detail Bloomsday in general, and its 100th occurrence in 2004 in particular.

[1] The date on which Joyce took his future wife Nora Barnacle on their first outing, a walk from Dublin to the nearby village of Ringsend.

[3] Is there such a thing as reading too much into all matters Ulysses? Joyce himself said that he “had put in so many enigmas and puzzles that it will keep the professors busy for centuries arguing over what I meant.” But then again, he didn’t design this map.

[4] Nabokov wasn't quite practicing his own advice: "Instead of perpetuating the pretentious nonsense of Homeric, chromatic, and visceral chapter headings, instructors should prepare maps of Dublin with Bloom's and Stephen's intertwining itineraries clearly traced."