Ungated railway crossings in France come with a now proverbial warning: Un train peut en cacher un autre, meaning: A passing train may be followed closely by another one. That practical knowledge is potentially life-saving. Figuratively, it describes a tendency of situations to be more complex (and/or dangerous) than when first observed.

The US-Canadian border may be a long way from France, but its peculiar shape near Lake of the Woods brings to mind this warning. The area boasts one very prominent border anomaly – the Northwest Angle – but, unbeknownst to most, features at least two more.

At 5,525 miles (8,891 km), the border between the United States and Canada is the longest international border in the world. It is also one of the most uneventful ones – consisting mainly of long, straight stretches through the inhospitable Arctic or the sparsely-populated prairie (1). The longest of the straight stretches follows the 49th parallel from Lake of the Woods, on the Minnesota-Manitoba border, to Point Roberts, where the international border finally dips into the Pacific.

Strangely, this, the longest single straight stretch of international border in the world (2), is bookended by two border anomalies – to be exact: two US exclaves (3).

The Peace Arch, on the border between Surrey (British Columbia) and Blaine (Washington) may mark the western terminus of the cross-continent borderline. But the 49th parallel is not done borderin’ there. After a short hop over, aptly, Boundary Bay, it resurfaces on a peninsula where it separates Point Roberts, part of Washington State, from Tsawwassen, British Columbia.

At its eastern end, the line bends north to the Northwest Angle, the only place outside Alaska where the US extends north of the 49th parallel. Like Point Roberts, this northernmost parcel of Minnesota is a practical exclave, directly reachable from the US only by boat. 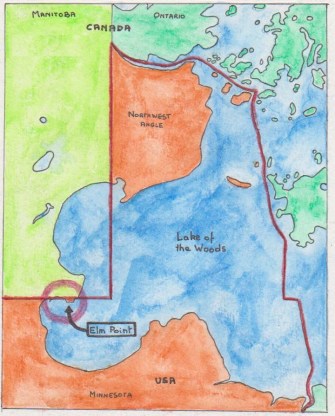 The Northwest Angle owes its existence to Benjamin Franklin, US Minister Plenipotentiary at the negotiations for the Treaty of Paris (1783). Franklin’s efforts won British acceptance for the US-British border to extend “from the most northwesternmost point” (sic) of the Lake of the Woods to the Boundary Waters (i.e. towards the east), and from that point due west to the Mississippi.

As the negotiators in Paris used the faulty Mitchell Map (which showed the Mississippi mistakenly extending too far north beyond its actual source at Lake Ithasca), such a line could not be drawn (4). Therefore, after the 49th parallel had been agreed as the line dividing American and British possessions west of Lake of the Woods, in 1818 a line was drawn due south from that northwesternmost point towards the 49th parallel. Hence the 90-degree upward bend in that border, creating, as the handful of locals call it, ‘The Angle’.

Point Roberts and the Northwest Angle are not the only border anomalies on the 49th parallel. A much smaller American exclave exists only a few feet from the aforementioned 90-degree bend. Just north of it, the Canadian peninsula of Buffalo Point juts out into Lake of the Woods, creating two separate bodies of water, Buffalo Bay to the north and Muskeg Bay to the south.

The 49th-parallel line skirts Buffalo Point’s southern shore. It intersects with land where Buffalo Point itself projects a peninsula into Muskeg Bay. Similar to the Point Roberts situation, the peninsula to the south of the line is US soil, cut off from its main territory by American water and Canadian land. Unlike Point Roberts, this much smaller peninsula is uninhabited. The actual border, visible on Google Maps as a line cut clear through the pine forest, is a mere 3,400 feet long (almost exactly one kilometre). 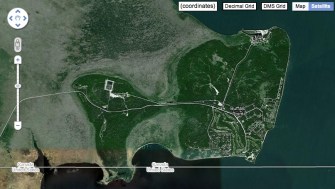 This box-shaped border anomaly is known as Elm Point. It is part of Roseau County in Minnesota, unlike Northwest Angle, which is part of Lake of the Woods County. But that’s about all the news from Elm Point. 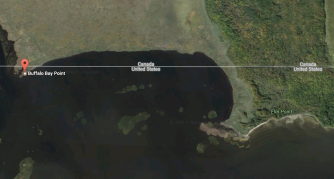 Invisible on maps of a slightly smaller scale, and even more obscure than Elm Point, is a small, triangular cape to the west of Elm Point. On Google Maps it is called Buffalo Bay Point, and it shares Elm Point’s peculiarity of being south of the 49th parallel. But you could be forgiven for overlooking it: its land border with Canada measures just under 400 feet (app. 120 m).

Google Maps shows the water around these exclaves blotched with what looks like smaller – American – islands. But the USGS map shows only two small, marshy islands southwest of Elm Point, both of which are absent from Google Maps. So, just how much forgotten American territory is languishing in Muskeg Bay? If the maps can’t agree, maybe an expedition should be mounted to settle the matter once and for all…

Many thanks to Ruland Kolen for sending in the handcrafted map of the US-Canadian border situation at and near Northwest Angle. The second map is from this page at the USGS.The third, showing the tiniest potential exclave, is taken from this page at the Minnesota Department of Natural Resources.

(2) Even more strangely, the exact length of this border line along the 49th parallel is not readily available. My own, rough estimate, using an online measuring tool, is approximately 1,250 miles (just over 2,000 km). Why the obfuscation? Maybe because of the doubt on whether to include the Point Roberts bit of the border. Or maybe because the border doesn’t quite follow the 49th parallel. Due to the limitations of 19th-century surveying equipment, the demarcated border in deviates from the 49th parallel by several hundred feet to the north or south in many locations. One source states that the actual border lies at latitude 48°59′51″ N, i.e. about 880 feet (270 m) south of the actual parallel.

(4) Another consequence of the Mitchell Map’s inaccuracy was the Republic of Indian Stream (see #27).

Is the Pope’s Statue a Sin Against Public Art?

Everybody’s a critic, especially when it comes to public art.  Mix in religion, a beloved figure, and modern art and you’ve got yourself all the ingredients for controversy.  The recently […]