The ship has been a popular metaphor for statecraft since at least the Ancient Greeks. The ‘ship of state’ was mentioned by Aeschylus in Seven Against Thebes (467 BC), and more influentially by Plato in his Republic (380 BC).

Plato was making an anti-democratic point by equating statesmanship with helmsmanship. Both disciplines require special skills that are unlikely to be selected for by the democratic process. Governance is thus best left to experts, who should be both benevolent and omnipotent – Plato’s term was ‘philosopher-kings’. (But that raises the question: How are these benign dictators selected, and by whom?)

The ship-of-state metaphor has been under constant sail ever since. It inspired an ode by Horace, a poem by Longfellow, and a song by Leonard Cohen (1), and it remains a favourite cliché of political commentators everywhere. However, in modern usage, it usually comes without Plato’s pro-dictatorial slant.

The secret of the metaphor’s survival has been its malleability. It can be combined with maritime history, ship-lore, or naval anecdotes. At the dawn of the republican age, it was said that republics were like rafts, always floundering but never sinking; and monarchies like sturdy vessels, seemingly able to weather the worst storms, yet wrecked in the blink of an eye.

The simile reflects a period, roughly from the French Revolution to the First World War, during which monarchies went from being the rule to the exception; as they declined, republics were the ascendant, their trajectory opposite and commensurate to monarchies’ near-total disappearance.

This map coincides with the beginning of that period. Dating from around 1795, it depicts France, by that time still a very young republic (°1789), as the proverbial ship of state, a pretty dangerously lurching one, at that. 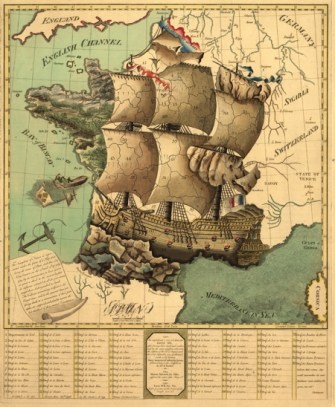 The map was produced in London, where an interesting ambivalence towards the French Revolution prevailed. On the one hand, a bit of disruptive unpleasantness across the Channel certainly must have exercised what talent the British had for Schadenfreude, France being the sempiternal arch-rival. On the other hand, in a better-the-devil-you-know kind of way, many British observers were deeply worried by the unpredictable otherness of the new-fangled regime that had overthrown the French monarchy (2).

And with some reason, as the subsequent Napoleonic Wars would prove. This worry is also reflected by the cartouche in the lower left corner, reflecting the refusal to accept the new situation:

“The Kingdom of France is represented under the form of a ship, that, being the arms of Paris, and that City being known on the 13th and 14th of July 1789, by its insurrection, to have given so great a shock to the monarchy, that its influence extended to all the provinces, except those distinguished as land. The Vendeans remaining steadfast in the Royal Cause, and to the present time preferring death to a renunciation of their principles: are supposed, embarked, to recover the lost standard of their ancient Constitution.”

The reference is to the failed counterrevolution (1793-1796) emanating from the Vendée, a coastal region just south of Brittany.

The mapmaker has used France’s familiar geographic contours (3) to superimpose the shape of a ship. The country is shown as a three-master, sailing west in the direction of the Atlantic (apparently against the wind).The rigging of the most easterly mast and the stern of the hull itself provide most of France’s northeastern and eastern border.

As mentioned in the cartouche: the ship itself represents the areas of France then under control of the revolutionary regime, while the terra firma stands for those areas still (or again) under control of the pro-monarchist counterrevolutionaries (i.e. Brittany and other areas in the west, and parts of Gascony in the southwest).

Two pieces of flotsam reinforce the message of a France ‘adrift’ of its true, monarchist, purpose: the broken-away anchor, in the Bay of Biscay, and just north of it the broken-off top mast, flying the French royal symbol of the fleur-de-lys, in the process of being retrieved by a boatful of counterrevolutionaries.

The red pennant emanating from Paris quite probably symbolises the bloodshed caused by the revolution (4), especially as it follows the flow of the Seine river towards the sea. A tricolore pennant in the top of the highest mast, and a flag on the poop deck also flying the revolutionary colours of bleu-blanc-rouge underlines the point that this behemoth of a ship is a new type of ship of state, uneasily contained by its national borders – and, indeed, soon to spill out of it.

This map found here at Decorative-Maps.com. I have been unable to locate the source version (probably higher-res), mentioned to be in the Library of Congress. Anyone?

(1) Q. Horatius Flaccus (a.k.a. Horace): Odes, 1:14; Henry Wadsworth Longfellow: “O Ship of State!”; Leonard Cohen: “Democracy” (“Sail on. Sail on, o mighty ship of state. To the shores of need, past the reefs of greed, through the squalls of hate.”)

(2) Not unlike the unease generated in the West – monarchies and republics alike – by the emergence of the Soviet system, also seen as antithetical to the status quo.

(3) Then as now, basically a hexagon; in French, the country is often referred to simply as l’hexagone.

(4) Or the revolution itself? At what point did red become the colour of revolution, and was it because of the bloodshed involved?