Michigan, with its palm-shaped Lower Peninsula, is the home of hand-based cartography. Or so you would think (1). Turns out California is not doing too bad either in the field of palmate (2) mappery. An example posted earlier on this blog describes how you can make a ‘handy’ map of San Francisco Bay (#313). And this pentadactylous gem shows us ‘A Handfull (sic) of 17 to 25 Mile Drives From Casa Del Rey and Casino Santa Cruz’.

The map, designed by Polly Hill and published in 1912, was part of a promotional brochure extolling the beauties, joys and pleasures to be sampled in Santa Cruz and environs – centred on the Casa del Rey Hotel, and the adjacent Casino. Both were recently built by Fred W. Swanton, a local businessman and civic leader who had such an impact on the area at that time that the city was nicknamed Swantacruz.

More than a cartographic gimmick, the hand shape is also a clever way of representing the local geography, with the two outer fingers representing the coastal corridor and the three middle ones some of the valleys radiating northward through mountainous terrain. 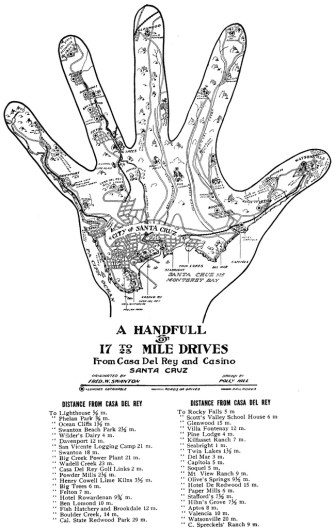 At the bottom of the palm, we see the street grid of the city of Santa Cruz, one of the most recognisable features of which is the Circles Neighborhood. On more detailed, modern maps, it consists of Palmetta Street, Bethany Curve, and Walk, Wilkes and Errett Circles, all centred on the Circle Church.

On the coast, between the US Lighthouse (at the southernmost point) and the mouth of the San Lorenzo River, are Swanton’s Casino and the Casa del Rey Hotel. East of the river, past Seabright, Twin Lakes and Del Mar, is the Hotel Capitola.

The thumb shows a network of rail and roads, leading along the coast towards Watsonville, via Capitola and Aptos. Attractions along the way include Valencia, Home of Ninn’s Famous Apples, the Hotel Appleton in Watsonville, and east of the Pajaro River, the World’s Finest Apple Lands.

The index finger leads to the Hotel de Redwood, via the Mount View Ranch, the Soquel and Rodeo Creeks, and a few paper mills just north of Soquel.

Glenwood sits at the top of the middle finger, as does the so-called Villa Fontenay. Both are reached via a road that leads past Scott’s Valley School House, Rocky Falls, a Pine Lodge, and the Branciforte Creek.

And this little piggy? The tip of the pink finger is not marked with a specific attraction (except an illegible creek), but at approximately the place where the distal and intermediate phalanges meet, a railway terminus is shown in a place named Swanton. Just south of there is the San Vicente Logging Camp, and further down are the town of Davenport, the Santa Cruz Portland Cement Works, Wilder’s Diary and finally, next to Santa Cruz proper, Swanton Beach (with a natural bridge at the beach) and Swanton Beach Park.

The look and feel of this ‘Handfull’ is reminiscent of another type of hand map, as found in palmistry. This provides another layer of spatial data to superimpose on Santa Cruz and environs. 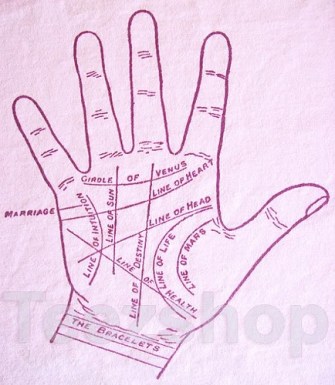 The Line of Intuition coincides more or less with the pink-finger corridor via Swanton Beach to Swanton; the Line of Sun points towards the Big Trees at the base of the ring finger; the Line of Destiny connects Santa Cruz beachfront (known here as ‘The Bracelets’) with Rocky Falls, on the right bank of the Branciforte Creek.

The progression northwards from Santa Cruz is marked by Lines of Health, Head, Heart, and a Girdle of Venus. The thumb zone, including Boquel, is demarcated by Lines of Life and Mars. Interested in something more than just friendship? Go check out the Line of Marriage, at Swanton Beach…

Many thanks to Yoram Meroz, who spotted this map in Donald Thomas Clark’s ‘Santa Cruz County Place Names: A Geographical Dictionary’ (first published by the Santa Cruz Historical Trust in 1986; a revised edition has recently been issued by Kestrel Press). The palmistry map found here.

(1) See #454 (‘Michigan, the Hands-On State’) for what remains the best-known example of hand-based cartography. The principle applies elsewhere too, though. US states seem especially mappable ‘by hand’; as attested by commenters, these are: Alaska, Maryland, New York, Ohio, Pennsylvania, Seattle, Texas, Washington, West Virginia, and Wisconsin. Other locations mentioned are: the US in its entirety (excl. Alaska and Hawaii), Ontario, Seattle, and Corsica. Broadening the category to limb-like locations, we can include Cape Cod (arm-shaped) and Italy (leg-shaped; or more precisely, because of the heel, boot-shaped).

Last night President Obama announced that 9/11 mastermind Osama bin Laden had been killed in a compound near the capital of Pakistan. I’m a little taken aback by the jingoistic […]