This map, distributed in France in the last year of the First World War, uses a trope common to a lot of cartographic propaganda: the enemy as an octopus, a tentacular monstrosity strangling its neighbours.

This late-stage war octopus is housed inside the pre-war borders of Imperial Germany, but it is associated with Prussia. This most powerful, most militarised of German states was the driving force behind German Unification in 1871 (enabled, incidentally, by a war with France).

The motto on top of the map reads: In 1788, Mirabeau (1) already said: War is the National Industry of Prussia. Contemporary German aggression is thus explained by placing it in a historical context. Even Germany itself is the result of aggression – Prussian aggression. The brightest red in Germany, not coincidentally the colour of blood, is reserved for the original core of the Prussian state, in two separate territorial blocks: East Prussia and a block comprising Pomerania and Brandenburg. 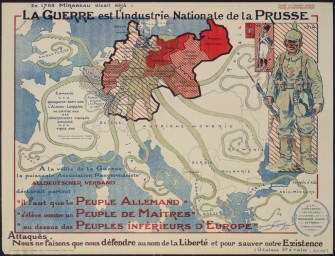 Added to this full-colour red are a few shaded areas, annexed up until 1815 (the defeat of Napoleon): Silesia (annexed between 1740 and 1765), so-called territoires polonais (annexed between 1772 and 1795, thereafter called West Prussia), Westphalia and the Rhine Provinces (annexed in 1815), and Saxony (dismembered in 1815).

Lighter red shading is reserved for the German states that came into direct Prussian orbit in a following stage of unification: Sleswig-Holstein (annexed in 1864), Hannover and Hesse-Nassau (both annexed in 1866), Mecklenburg, Brunswick, Saxony (or what was left of it), Bavaria, Wurtemberg, and the Grand-Duchy of Baden.

A separate marking is reserved for Alsace-Lorraine, arrachée à la France, “seized from France”, in 1871. The difference is not subtle, nor is it meant to be: dotted not striped. Read: unwillingly occupied, not approvingly annexed. The same aggressive dotting is reserved for most of Belgium and much of northern France, at the time of the map’s publication also still under the jackboot of the German occupier.

The text filling out the rump of metropolitan France underscores the point made by the dots: Alsace-Lorraine, invaded forty-seven years ago, is no different from the French departments invaded three years ago. Clearly, this declaration by the Chambre des Députés (Lower House) of the French parliament (on October 25th, 1917), is to remind public opinion that, in case of a French victory, the reclamation of Alsace-Lorraine will be priority number one.

The alternative to French victory is spelled out at the bottom left of the map: On the eve of the war, the powerful pan-Germanist association ‘Alldeutscher Verband’ declared everywhere: “The German People needs to rise up like a people of masters over the inferior peoples of Europe”.

Already prefiguring the racist core of later Nazi ideology (2), this stark warning served to remind readers of this map that defeat in this new, total war would be a new, total kind of defeat. The octopus tentacles, emanating from a sinister monster’s head crowned with a spiked helmet typical of the German army of the day, are reaching out to strangle not just France, but also England, Russia, Romania, Turkey, Greece, Italy and Spain.

The tentacles don’t seem to be strangling Austria-Hungary. This is logical: the Double Monarchy is Germany’s closest ally. But then, why is it not associated at all with Germany’s war guilt? Why is it not doing any strangling?

At the bottom of the map is a quote from the French marshal Pétain, from June of 1917: “Since we have been attacked, we have merely defended ourselves, in the name of Freedom and to save our very Existence.” This is, of course, the very same Pétain who would gain infamy after the French defeat of 1940 by leading the Vichy government, collaborating with the victorious Germans.

A final detail, in the top right hand corner: three Prussian, c.q. German soldiers, corresponding with the historical periods indicated by the colouring on the map. A comically tiny soldier represents Prussia’s power in 1715.  A larger, but still rather clumsy-looking bespectacled oaf shows Prussia’s military might during the Napoleonic era. A menacing Prussian, bloody bayonet at the ready (and bloody fingerprints on the uniform), symbolises the greatly increased, existential threat to French survival. Message to the war-weary French populace: kill or be killed.

Above the troika of soldiers, a small-printed slogan reads: Everything for a France on its feet, for a victory of justice.

Considering the grim circumstances of the war and the terrifying death toll by that time, the less than amical tone of this piece of propaganda is understandable. More puzzling is the one last bit of information in the bottom right corner, casting an intriguing light on the map – or, to be precise, on similar efforts by the opposing side. A message reads that his map was the work of a conference contre la propagande ennemie en France.

One understands the importance of keeping up morale at the home front, and efforts in that sense on the German side were surely comparable, appealing to Germany’s sense of existential threat to keep up morale. But what could possibly have been the content and thrust of German propaganda in (occupied) France? One can’t really see how the occupying Germans, notoriously uncouth, would have attempted to win hearts and minds in northern France.

(1) It’s unclear whether this refers to the French economist Victor de Riqueti, marquis de Mirabeau (1715-1789), also known as the elder Mirabeau; or to Honoré Gabriel de Riqueti, count de Mirabeau (1749-1791), his son, a prominent pro-monarchist during the French Revolution. The younger Mirabeau was notoriously ugly. The midwife who delivered him reputedly warned his father before presenting him with his newborn son: “Ne vous effrayez pas” (“Don’t be alarmed”).

(2) The antisemitic, antislavic, militarist and expansionist AV would be instrumental in the foundation of the DAP, the precursor to the NSDAP, the party that would propel Hitler to power.

Back from the 24th Keck Geology Undergraduate Research Symposium