“A map of the world that does not include Utopia is not worth even glancing at”, said Oscar Wilde (in his 1891 essay ‘The Soul of Man Under Socialism’).

‘Utopia’ is a Greek neologism invented by the author of the eponymous satire, Thomas More, and can be translated as ‘Nowhere’. Its perfect (but fictitious) society was meant to contrast with, and consequently be a criticism of, contemporary society in early 16th century Europe.

This picture was taken from one of the first editions of the book, which is published online at the Bibliotheca Augustana, an interesting repository of Latin texts, stretching from well before Christ to the 20th century. Unfortunately, despite the lovely colours, the gothic lettering makes the text labels in this map unreadable… 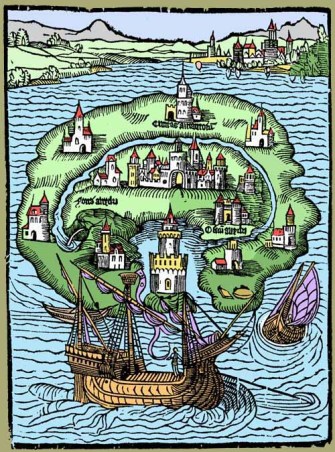