Does this image qualify as a map? Strictly speaking, no. The relationships between the objects in this diagram (1) are logical, not spatial. But then again, all the objects shown here are of a geographical nature. That makes this diagram some kind of map, if not a proper one, then at least a strange one. And that’s exactly how this blog likes them.

This diagram is a particularly instructive map, too: it neatly visualises the gaps and overlaps between all kinds of supranational institutions in Europe – differences which for the most part are too subtle for any but the most attentive observer. 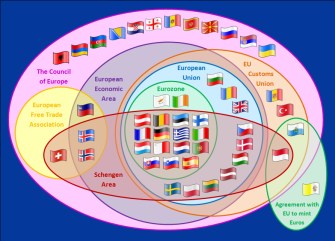 All will be aware of the ‘Europe’ that is a less than homogenous conglomerate of nation states, with an unwieldy Brussels bureaucracy at its centre. This European Union, which consists of 27 member states, is merely the most visible of several European unions, all committed to different versions of the same goal: European integration.

The EU is formally committed to strive for ‘ever closer union’ but its members still disagree on how much more than a free trade zone it wants to be. This continuing struggle for the soul of the EU (if that doesn’t sound like too much of an oxymoron) is epitomised by the smaller, green circle contained within the blue EU one. These are the countries of the Eurozone, 17 at present, who’ve jumped in at the deep end of the sovereignty pool by discarding their own currencies in favour of a single one.

Project euro has an economic rationale – before monetary union, if you took 100 francs, deutschmarks or any other of the original currencies, and exchanged them in the other 11 countries of the original Eurozone, you’d be left with half the amount, the other half lost to conversion fees. Clearly not good for cross-border business.

But abandoning one’s national currency also has deep political implications. Even when that subject had been anxiously avoided at the time, visions of an almighty European Central Bank proved too much for the UK, Denmark and Sweden. These three EU countries opted out of the euro. The other EU-but-not-Eurozone countries shown here are later Eastern European additions, and they did not have the opt-out option. They are obligated by their accession treaties to work towards Eurozone membership, as Estonia has recently managed to do.

The orange circle represents the European Union Customs Union (EUCU), which is the EU plus the microstates of Andorra, San Marino and Monaco, plus the non-microstate of Turkey. No customs are levied on goods travelling within the EUCU, but there are levies on goods entering it. This common external tariff means that the EU effectively acts as a single entity within the World Trade Organisation (WTO), and on other international trade forums.

Another economic club that ever so slightly transcends the European Union (2) is the European Economic Area (EEA), which consists of the EU and the microstate of Liechtenstein, plus Norway and Iceland. The EEA basically allows these three countries to benefit from EU membership without actually being EU members: they get to participate in the European single market (3), but only because they adopt all relevant EU legislation, and without representation in any of the EU institutions; they do, however, have an opt-out on all matters relating to agriculture and fisheries (4).

The non-EU members of the EEA plus Switzerland constitute a vestigial twin of the EU, called the European Free Trade Association (EFTA). Membership in both clubs is mutually exclusive. This erstwhile competitor, once dubbed the Outer Seven to the early EU’s Inner Six, has seen most of its initial members peel away to join the competition (5). And the erosion continues. While Switzerland, Liechtenstein nor Norway seem poised to join the winning team, Iceland has applied for EU membership, following the collapse of its economy in the financial crisis of 2008.

Transsecting all previously mentioned organisations, without totally encompassing any of them, is the Schengen Area, so called after the Luxembourg town in which the deal was signed. The Schengen Area now comprises 25 European states, with no border controls between them (and relatively strict outer border controls). It includes most EU member states, but excludes the UK and Ireland, who have opted out; and also Bulgaria, Romania and Cyprus, who will join in due course. Also included are all EFTA member states except Liechtenstein, plus non-EFTA-member Monaco.

Overarching all previously mentioned organisations is the Council of Europe, often confused with the European Union, with which it shares a flag (the 12 gold stars on a blue field), an HQ (Strasbourg), and a long-term goal (European integration).

Of all the political bodies mentioned so far, the C of E is the only one to come close to encompassing Europe’s geographical entirety. Apart from the members of all organisations mentioned above, it also includes six Balkan states outside all other European institutions (i.e. Croatia, Serbia, Bosnia-Herzegovina, Montenegro, Albania and Macedonia), plus six ex-Soviet states (Russia, Ukraine, Moldova, Armenia, Azerbaijan, and Georgia). Only three European states are not a member of the Council of Europe: Belarus, Kazakhstan, and the Vatican (6).

This anachronistic statelet, the world’s smallest country and Europe’s only theocracy, has one tenuous link to Europe’s other institutions: it mints euros, albeit in relatively small amounts, making the coins imprinted with its head of state – the Pope – much sought-after collector’s items.

This map found here on Wikipedia.

(1) A Venn diagram, devised by the English mathematician John Venn around 1880. His eponymous grandfather was a leading figure in the Clapham Saints, of which more in #499.

(2) This aspect of the diagram seems to have a geographical component: where the EUCU is a ‘southern’ extension of the EU, the EEA is a ‘northern’ one.

(3) Which comprises the ‘four freedoms’, of unimpeded cross-border flow of goods, persons, services and capital.

(4) A fat lot of good that second bit does the landlocked Liechtensteiners.

(5) Portugal, Finland, Sweden, Denmark and, most importantly, the UK, its original mastermind.

(6) Actually, there are quite a few more European states not a member of the C of E, but these are the so-called ‘states of limited recognition’ – sometimes by only one other state (Nagorno-Karabakh by Armenia, Northern Cyprus by Turkey) or by only a few (Transnistria, South Ossetia, Abkhazia), or even by many, but far from all (Kosovo).

What Videos of Babies Getting Clobbered Say About the Internet

Google the words ‘baby’ and “owned” and you’ll find a curious phenomenon: many people have put up vids of infants and toddlers getting conked, clobbered, whacked and tripped.