In a mere decade and a half, Google has gone from cuddly online startup to scary virtual colossus. The internet search engine offers a range of services that now also include mapping, translation, advertising, email, and blogging, to name but a few. Government agencies on both sides of the Atlantic are investigating whether Google is breaking antitrust laws.

The company’s very tentacularity seems to contradict its original – if unofficial – motto: Don’t be evil. For some would say that everything big is bad, and that only small is beautiful (1). Leaving such moral and esthetic judgements aside, it certainly is true that bigger means more consequential, and Google does have an increasingly large real-world footprint. It can even start wars – or come very close to doing so.

In Central America, which gave us the Football War (2), it almost started the world’s first Google War. By misplacing a border between Nicaragua and Costa Rica, Google Maps ‘transferred’ an island from the latter to the former country, and in doing so became the justification for troop movements and sabre-rattling in the disputed jungle zone. Google eventually rectified its mistake, and a full shooting war has so far been avoided (3).

But now Google is at it again, sowing discord and stoking up strife from the Googleplex in Mountain View, California to the heretofore peaceful Dollart Bay, which forms the northern terminus of the German-Dutch border. 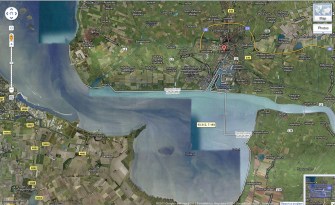 The Dollart, originally dry land, but lost to the North Sea in medieval floods, lies to the west of the Ems river estuary. Its western shore is Dutch, the eastern one German, but the exact course of the border in between is contested. Predictably, Germany insists it’s close to the Dutch shore, while the Netherlands maintains a claim nearer the centre of the Dollart. 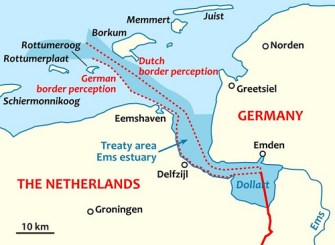 But not as close as shown by Google Maps, which has the Dutch border hugging the German shore, and penetrating into the docks of Emden, effectively blockading the harbour. The Neue Binnenhafen and the channel out to sea have been annexed by the Dutch, cutting off the Industriehafen and part of the Binnenhafen. This could be very annoying for the Volkswagen plant, just east of the port, and other companies depending on unhindered maritime traffic for their business.

The origin of Google’s faulty border on the Dollart is a mystery. Where the situation on the Nicaraguan-Costa Rican border had some basis in nineteenth-century disputes and an unfortunate reference in a US government map, no such antecedents seem to be at the base of this misconstruction. No Dutch claim extends as far as the German shore, let alone enters Emden’s harbour.

The city council of Emden was not amused, but has had a hard time communicating the depth – and justification – of their displeasure to the map fiends at Google. Over a year ago, Emden notified their internet overlords of the error; no correction has been forthcoming. The city has now asked its Bundesland of Lower Saxony to act on its behalf. Maybe Google’s unwillingness to un-fail its Emden map has to do with the fact that there is no agreed border to correct to: whichever of both claims Google Maps would choose to represent, it would seem to support one side of the ongoing argument. Could it be that Google Maps isn’t equipped to simply shade disputed areas?

Many thanks to Peter Gordon Kurilecz for alerting me to the Google Maps fail. Border dispute map taken from this Wikimedia page.

(1) The Austrian philosopher-cartographer Leopold Kohr certainly thought so: see #18 and #19.

(2) In 1969, between El Salvador and Honduras. The animosity surrounding a few football (soccer) matches between both countries may have lit the fuse, but the root causes and the outcome were less trivial: tension caused by migration, and a conflict that killed hundreds, even if it lasted only days.

(3) The real reasons for the conflict between Nicaragua and Costa Rica are both more complex, and much older than the Google Maps malfunction of late 2010. Some background on the history of the territorial dispute on this page of Ogleearth.

A Carrington-magnitude event would kill millions, and cause trillions of dollars in damage. Sadly, it isn’t even the worst-case scenario.
Up Next
Strange Maps

An excellent way to visualise China’s place as the second largest economy is to match its individual provinces with entire nations that have a comparable Gross Domestic Product (GDP).