In a slim volume entitled L’Europe au XXe siècle, published in Paris in 1863, French author Henri Dron predicted the political future for the Old Continent in the coming century. Dron showed himself to be an amateur rather than a connaisseur of geopolitics, by committing the original sin of futurology: assuming that the future will be more sensible, less chaotic than the present.

Dron’s future is predictably idealistic. He foresees how the tangle of greater, smaller, older, newly formed and still forming European states of his day will coalesce into a neat collection of ten little empires, each about similar in size, all but one with their capital conveniently somewhere near the middle of the territory. The course of Dron’s intra-European borders is noticeably more smooth and regular than the real borders were at that time – or would be afterward. 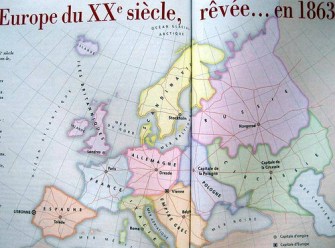 Dron’s choice of capitals is interesting where it deviates from our expectations: Toledo for the Iberian empire, Dresden for the German one and Novgorod for the Russian one. The French futurist is centralist to the degree that he seems to prefer constructing the Polish and Circassian capitals from scratch, just for location’s sake.

Vienna, on the border between the German and Greek empires and rather central in Europe as a whole, is the Capital of Europe.

Lisbon, in spite of its eccentric position on the edge of the continent, seems to lay claim to some other elevated status – perhaps capital of the world?

I have very little information on this map, which apparently appeared in the August/September 2010 issue of Le Monde Diplomatique, under the title ‘Le temps des utopies’ (‘The Era of Utopias’). This map was found here on the French website Agora Vox, in an article which mentions that Dron’s map (or maybe his entire pamphlet) was refused for publication twice, but fails to explain why.

(1) The UK still included all of Ireland at the time of Dron’s prediction.

(2) Not quite the same area as the present-day Czech Republic, but close.

Will WikiLeaks Have Its “Social Network?”

The stories intertwine on the point of personality: is Mark Zuckerberg a genius? Is Julian Assange? At what point does (at least in Aaron Sorkin’s vision of the Facebook founder, […]