Each US state is fitted out with an array of state symbols, from birds and crustaceans over colors and poems to tartans and toys. This map takes care of a glaring omission in that long list of attributes, trivial and otherwise (1), and provides an overview of state movies.

To qualify as such, a state movie has to be set in said state, and its location must be recognisable from, referenced in and (somewhat) relevant to the movie.

A few movies cement the link to their state by name-checking the state itself or a location in it in the title (Raising Arizona, Fear and Loathing in Las Vegas, Bull Durham), although a few mention a location outside the state itself (Fargo is actually in North Dakota, not in Minnesota; Kentucky’s state movie is called Kalifornia). The title of Indiana’s state movie Hoosiers refers to the nickname for its inhabitants. 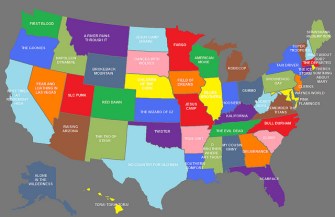 Other titles mention more abstract features of the local environment: Alone in the Wilderness, for Alaska; Twister, for Oklahoma; Children of the Corn, for Nebraska; A River Runs Through It, for Montana; Brokeback Mountain for Wyoming; Field of Dreams, for Iowa; Southern Comfort, for Louisiana; Groundhog Day, for the annual event in Punxsutawney, Pennsylvania. Such locations can even be fictional, as with Maine’s state movie, The Shawshank Redemption, California’s Fast Times at Ridgemont High, or Kansas’ The Wizard of Oz.

A few other titles refer even more obliquely to the movie’s location. like the Dakotan prairies implied in Dances With Wolves, New York’s urban jungle conjured up by Taxi Driver, the rough, survival-of-the-fittest Texas suggested by No Country for Old Men, or the rural atmosphere inherent in Jesus Camp, the state movie for both North Dakota and Missouri.

Even more generic and interchangeable are titles like Glory, Deliverance, Red Dawn and First Blood. Titles, whether generic or specific, aren’t everything. The question of which movies are emblematic enough to become ‘state symbols’ is an interesting one, and remains open in spite of this map. Why not The Deer Hunter for West Virginia, for example? How about The Green Mile for Louisiana? Or 30 Days of Night for Alaska?

And how about a tv series version of this map? Frasier for Washington state, Cheers for Massachusetts,…

Many thanks to Toon Wassenberg, Elise K. and Gregory Lewis for sending in this map, mentioned here in the Huffington Post, original context here on Reddit, where it was posted by subtonix. Sharper image also re-grabbed there. Thanks to Duncan MacLeod, JR and Jason Kerwin for helping with the attribution.

UPDATE: Many thanks to commenter Andrew Shears, who actually went and made a tv series map, seen below (and taken here from his blog, Thinking Pseudogeographically). Another map with the same subject was made some time ago by Dan Meth, here on his blog danmeth.com. Hat-tip to Sam Huddy for that one. 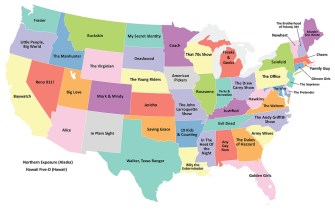 (1) for a complete overview, see these Lists of United States state insignia on Wikipedia.

Your Family Portrait in 2050

We have all sat through the laborious exercise of having a family picture taken. The end result of the chaos is typical across almost all families: a happy picture showing two gray […]