All conflict tends towards binarity, be it on the chess board, in the political arena or on the mean streets of Los Angeles. This map shows parts of south LA, and the way it is divided between the two main gangs, the Bloods and the Crips. Curiously, the colour scheme is identical to the one dividing US counties and states into ‘red’ (Republican) and ‘blue’ (Democratic) ones, providing this map with an American election night feel.

By bullets rather than ballots, this part of LA is definitely more ‘blue’ than ‘red’, with the Crips occupying a large contiguous area straddling the Harbor Freeway (110) north of the intersection with the Century Freeway (105; not marked on this map). A single Blood territory seems attached to the junction itself, possibly to allow a handy escape route when the pressure of being surrounded by Crips gets too much. 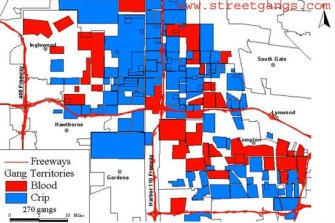 Blood ganglands increase to the northwest of the map, near the San Diego Freeway (405)  and the centre of Inglewood (1). In the lower right quadrant of the map, in or near Compton, things seem to have evened out, with roughly as many Blood territories as Crip ones.

This map of south LA’s ganglands leaves quite a few questions unanswered. Firstly, what about population density? Large, empty lots are less interesting than small, densely populated ones, where commerce – legal and otherwise – is more likely to thrive. Population density may prove a more practical determinant of gangster success than territory occupied.

Secondly, what about the blank areas. Are these gang-free? Or do they change hands too often to be marked as either blue or red? Maybe they are occupied by third-party gangs, the LA underworld’s answer to the Tea Party.

And thirdly, what about the subdivisions within each colour? How do the subgangs relate to each other? The Streetgangs

website, which produced this map, lists over 270 separate gangs in LA County (although many of those are listed as ‘defunct’). How does one Blood or Crip outfit relate to another one of the same crime family? As the competition, in various degrees of unfriendliness, or as an affiliate, to be helped when in need?

Many thanks to Alex Burke for sending in this map.

(1) Although one wonders what, in a sprawling place like LA, constitutes a ‘centre’. A local administrative building? The statistical centrepoint?

Summer is over. Now fall begins. When we think back on this season in this year will we remember the books, the songs, the finals of the U.S. Open (or […]