It’s the 1930s, and while elsewhere in the world evil people are poring over maps with plans for plunder and dreams of conquest, cartography is serving a more benign purpose in Harlem, New York City. This Night-Club Map of Harlem is a chart of the fun to be had  in the cultural capital of black America, circa 1932.

At that time, this vibrant community on the northern tip of Manhattan was experiencing what came to be known as the Harlem Renaissance – a flowering of African-American literature, theatre and (jazz) music. This map is focused on the area of Harlem just north of Central Park, where much of that flowering took place.

Perhaps exemplary of that renaissance, this map was drawn by Elmer Simms Campbell (1906-1971), the first African-American cartoonist to be published nationally (in Esquire, Cosmopolitan, The New Yorker and Playboy, among others).  The map faces southwest, is bounded by 110th Street (in the top left corner), which runs along Central Park’s northern edge, and concentrates on Lenox Avenue and Seventh Avenue (“or heaven”). 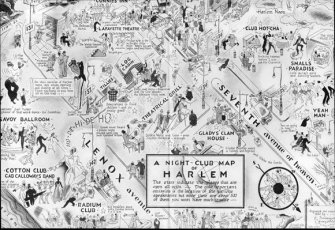 This being the tail end of Prohibition (1920-1933), not much effort is made to conceal the fact that alcohol is readily available in Harlem nightlife. As the legend states, [t]he only important omission[on the map] is the location of the various speakeasies but since there are 500 of them, you won’t have much trouble…

Other intoxicants are equally easily obtainable. Near the corner of Lenox Avenue and 131st  Street, a hunched figure proclaims Ah’m the reefer man, selling marahuana [sic] cigarettes at 2 for $.25. This section of Harlem, bounded on the other side by 133rd Street, seems to have been a particularly active, if not necessarily profitable nightlife hotspot: […] there are clubs opening and closing at all times – There’s too many to put them all on this map.

Some of the more famous night spots do get name-checked, often accompanied by some insightful information seeming to indicate that Mr Simms Campbell knew what he was talking about.

A lot of attention is lavished on the extraordinary concentration of  musical talent that made Harlem hop in those days.

The map is replete with much more detail, a lot of which eludes this map-lover. Why, for example, is everybody asking What’s de numbah? The question is asked in the police station, just north of Small’s Paradise. It’s repeated  not far from reefer man. It’s answered with the intriguingly non-revealing answer of “$.35” at the bottom of the map, just next to the peanut seller and the crab man.

This Night-Club Map of Harlem, apparently first published in Manhattan Magazine (1932), was also used as the endpapers of Cab Calloway’s autobiography, Of Minnie the Moocher and Me (1976). Many thanks to Christoph Höser for sending it in. Original context here, at Mike Thibault’s blog.

The high pitches from the flute and the harp would reach your ears before the notes from the tuba and the cello.
Up Next
Guest Thinkers

“Cathy” was not a Feminist Trailblazer