Suomi-Neito is a distant, but weirdly parallel echo of ‘Paula’, the personification of Brazil’s Sao Paulo state (discussed in #471). Female like most other anthropomorphic representations of geographic entities (1), this Finnish Maiden shares with Paula the extra distinction of not only symbolising her nation, but also literally coinciding with its geographic shape. 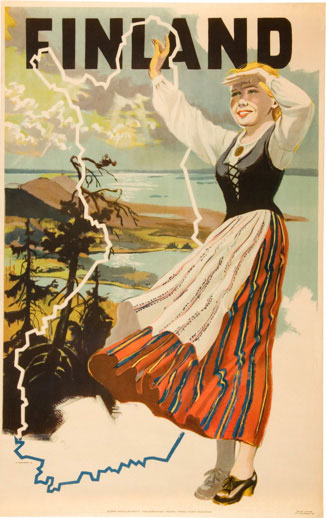 Although eternally young, the Finnish Maiden is older than the Finnish nation. She was devised to represent the longed-for national independence in the 19th century, when Finland was still a Grand Duchy in the Russian Empire. The shape of that Grand Duchy inspired the conceit of seeing her as the country itself, with both arms raised. Eastern territories lost by Finland to the Soviet Union in 1944 meant the Maiden, facing the viewer, also lost her raised left arm (2).

Nowadays, Suomi-Neito is usually presented as follows: Finland’s westward protrusion into the Gulf of Bothnia is the Maiden’s wind-blown skirt, the narrower middle of the country her small waist, the northernmost bulge of Lapland her head and the narrow region branching out towards the northwest between Sweden and Norway her waving right arm. The identification of this region with its anthromorphic equivalent is such that the area, officially the commune of Enontekiö, is commonly referred to as Käsivarsi (‘The Arm’).

Many thanks to Kevin Axe for sending in this map, found here on Come to Finland, a website (and a book) devoted to the art of Finnish tourist posters. The map and the maiden were produced in 1948 by Finnish artist Olavi Vepsäläinen (1927–1993).

2 the area known as Petsamo in Finnish, now the Pechengski District in Russia, which while in Finnish possession granted Finland access to the Barents Sea, at the same time denying the Soviet Union a common border with Norway. The situation was reversed when the area was ceded to the Soviet Union after Finland’s defeat in the Continuation War (1941-1944), together with other areas further south, most notably a large part of Karelia in Finland’s southeast. This Wikimedia Commons map shows the location of Petsamo (in yellow), plus a small area pre-ceded by Finland to the Soviets in 1940 (in green) and another area sold by the Finnish to the Soviet Union in 1947 (in red). Petsamo, incidentally, is the birthplace of an actress who popularised an esthetic diametrically opposed to the wholesome, blonde, outdoorsy one symbolised by the Finnish Maiden: Maila Nurmi (1922-2008), better known as the raven-haired, black-clad proto-goth Vampira.

We physicists used to laugh whenever we talked about some of the topics that I mention in my book, “Physics of the Impossible”—some of these include such ideas as invisibility […]