Apart from being a past sponsor of international terrorism and the West’s new best friend in North Africa, Libyan leader Muammar Gadaffi is also a crackpot dictator with the bizarrest imagination1 this side—heck, any side—of Pyongyang. On foreign trips, the Guide of the Libyan Revolution, as he is called, habitually pitches a bedouin tent on the front lawn of a luxury hotel, sometimes even flying in camel mares for their fresh milk. But it’s doubtful whether Africa’s most colourful colonel will be pitching his tent on Swiss soil anytime soon.

Since July 2008, Gadaffi has been engaged in an ever escalating war of words with Switzerland. The arrest by Genevan police of Gadaffi’s son Hannibal and his wife for assaulting their housekeeping staff was a rather trivial matter in the grander scheme of international affairs. But Gadaffi decided to huff, and puff, and hit back with punitive economic measures against the Helvetians, not least the withdrawal of $5 billion from his Swiss bank accounts and the taking hostage of a few Swiss entrepreneurs on business in Libya.

Gadaffi cranked the level of unpleasantness up to 11 by advocating the partition of Switzerland along linguistic lines among its French, German and Italian neighbours2; stating that he would wipe the alpine confederation off the map even more thoroughly, if he only had the Bomb; and calling for an all-out jihad against Switzerland3. 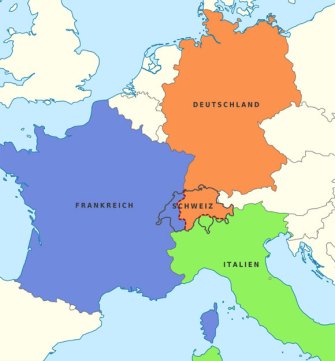 How Gadaffi’s proposal for the dismemberment of Switzerland might work out. Map taken here from Wikipedia.

Not easily intimidated, the Swiss of late seem determined to grind Gadaffi’s gears, by advocating expansion rather than extinction for their Helvetic Confederation. Three separate, and from the Tent-dweller-in-Chief’s perspective rather irksome proposals have come to the attention of Strange Maps.

The first would correct the historic injustice of Savoy’s annexation by France. The Savoy4 was absorbed by France in 1860 after a rigged plebiscite returned an improbable 99.8% in favour of annexation. Not an option on the ballot paper: regaining independence or joining Switzerland. This first proposal would also see Franche-Comté5 transferring to the Swiss side. According to a September 2008 article on the Savoyard website RégionLéman.com, the French regionalist groups Savoie Europe Liberté and Mouvement Franche-Comté signed an agreement to conduct resolute and audacious actions against the centralist French state. The ultimate goal—libération—apparently is compatible with encantonment in Switzerland. It does seem compatible with Swiss wishes: according to an opinion poll, almost 44% of all Swiss already look favourably on annexing said territories, a percentage increasing to just under 56% when confined to la Suisse romande (French-speaking Switzerland). 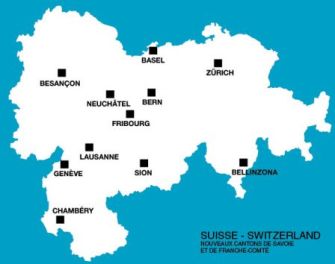 This map shows Switzerland enlarged with French Savoy (to the south of Geneva) and the Franche-Comté (to the north of Geneva). Map taken here from the aforementioned Région Léman Website.

The second proposal, launched as recently as 12 June 2010, taps into regionalist sentiments on the other side of the French-Italian border, and proposes an Helvetic-Insubrian Confederation. Named after the Celtic Insubres, who dwelled in this pre-alpine area and reputedly founded Milan in 600 BC, the term Insubria formerly was used to mean Lombardy, or the Duchy of Milan. In recent decades, it has regained currency as the name for a Swiss-Italian Euroregion (since 1995)6, for local cultural associations, educational institutions, etcetera. Almost inevitably, the reawakening of an Insubrian identity snowballed into calls for political autonomy–on both sides of the Swiss border–among others by the group Domà Nunch7. The eco-nationalists (who commemorate the 1976 Seveso ecodisaster yearly as a kind of national day) habitually promote the idea of an Insubrian Confederation, modelled on the Swiss one to the north. The proposal of an Helvetic-Insubrian Confederation apparently was a response to expansionist noises from across the Swiss border8. Eager eco-nationalists started calculating the economic viability of such a Confederation, which would unite Insubrians on both sides of the border (and, incidentally, with a lot of non-Insubrians in Switzerland). The expanded Confederation would have over 15.5 million inhabitants, cover 53,700 km2 and would have a GDP of €600,000 million (almost $775.000 million), making it the 9th economy in Europe. 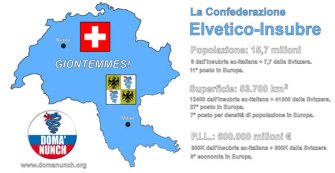 A map of ‘La Confederazione Elvetico-Insubre’, emblazoned with the Insubric word for “Let’s Unite”, and with the Insubrian insignia, which contains, horribly, a child-eating snake. These guys need a good PR agency. Map taken here from the Domà Nunch Website.

Although it doesn’t take in all the areas covered by the first and second proposal, the third plan is the most ambitious one. Launched in June of 2010 by the right-wing populist Schweizerische Volkspartei (SVP), it would expand Switzerland into all its neighbours–except tiny Liechtenstein, which would be enclaved inside a truly Greater Switzerland. “We’re always discussing Switzerland joining the EU, never the other way around,” said SVP-president Toni Brunner, approving of to the proposal by one of his party-members. SVP-parliamentarian Dominique Baettig said he would neighbouring regions that “suffered under their national and the European political classes” to join the Swiss “democracy with a human face.” Ideally, he would like to see Switzerland snatch the Land Vorarlberg from Austria; the province Aosta, Varese, Como and Bolzano (‘Bosen’ in German) from Italy; the départments Jura, Ain, Savoie and Haute-Savoie and the région of Alsace (‘Elsass’ in German) from France. The single biggest chunk would be the German Bundesland of Baden-Württemberg, bringing in almost 11 million new Swiss citizens. If all went according to the Mr Baettig’s plan, the new, Greater Switzerland would count around 25 million inhabitants and would be a mid-sized European power to be reckoned with… at least by the Libyans. 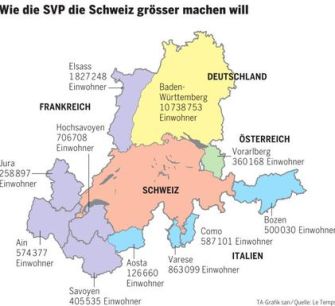 Many thanks to Christophe Schmutz, Matteo Colaone and Jörg Raddatz for sending in these maps.

1 Bizarrery too fantastic to pass up, but too extensive to list here. We recommend you Google/Bing/Yahoo it.

3 in February 2010, following the Swiss plebiscite that banned minarets.

4 actually only part of the Savoy; other parts of the historic region are at present Italian territory.

5 Franche-Comté also has a tradition of independent-mindedness. The name of the region refers to the ‘Free County’ of Burgundy, not to be confused with the Duchy of Burgundy.

6 For earlier treatments of Euroregions, see Strange Maps #86 and #163.

7 which means something like ‘Only Us’. Which sounds remarkably like the English translation of the Irish Sinn Fèin.

The science fiction dream of a traversable wormhole is no closer to reality, despite a quantum computer’s suggestive simulation.
Up Next
Culture & Religion

Charles Simic recalls the excuses he offered the first time he watched his native Yugoslavia lose at the World Cup. The poet lists the four universal excuses given when a soccer team loses.