The film industry’s move to Hollywood, early on in the 20th century, was not entirely an accident. Out west, good weather was more constant, the light better and the scenery more varied than on the East Coast. Hollywood, then still a sleepy hamlet 10 miles north of Los Angeles, was conveniently central between the bustling city and the natural splendour further afield.

Depending on how far afield you’d want to carry your tripod, that splendour could be a stand-in for a surprisingly wide swathe of the world. 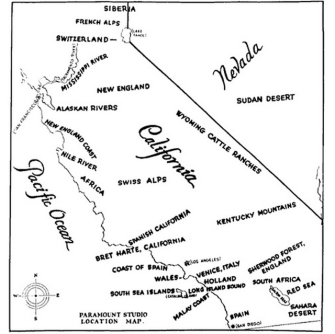 This map, apparently produced by Paramount Studios in 1927, does not mention the corresponding films. Can anybody suggest any of the movies these locations refer to? The map does mention, without further context, the 19th-century Californian poet Bret Harte.

Many thanks to Brian Kavanaugh, Lee Breisacher, Noah Feehan, Jim Eikner, Ben Jefferies and Dan Beaver-Seitz for sending in this map, found here on Flowing Data.