English? Shmenglish. Not longer than 250 years ago, France basked in the glory of its uncontested cultural superiority. French was the sole language of civilised and courtly discourse throughout Europe. French art, philosophy and literature shone like beacons of haute culture, showing the way for the rest of the world.

It was hard to see how any other nation could contribute, much less compete. Especially not les Anglais. Their colonial and commercial successes were begrudgingly acknowledged, attributed to the same streak of practicality in their national character that was used to dismiss English culture – then judged to be as much of an oxymoron as, until recently, English cuisine.

England is a nation of shopkeepers, Napoleon snorted (1). Earlier, in 1777, Voltaire had told the Académie française that

“French [theatrical] masterpieces have been performed before every court and in every academy of Italy. They are played everywhere from the borders of the Arctic Sea to the sea which separates Europe from Africa. It will be time to argue when the same honour has been done to a single piece of Shakespeare.”

Voltaire appreciated England and English culture – and certainly the English press (his Lettres philosophiques were published in English first) – but he developed a hatred for the ever-growing French idolatry of Shakespeare, whom he called “nothing but a provincial clown”:

“What makes the whole thing even more calamitous and horrible, is the fact that I am the one who first mentioned this Shakespeare; It was I who first revealed to the French the few pearls that I had discovered in his enormous dungheap. Never did I expect that one day I’d be helping to trample underfoot the crowns of Racine and Corneille so that they could be set on the head of a barbaric barnstormer!”

Despite Voltaire’s best efforts, the Bard’s work caught on, an essential ingredient in the multi-faceted anglomanie that swept France from the 1750s onwards, when it became clear that English culture was more than mere rosbif for the soul. The French love-hate for Shakspeare (as they sometimes called him) is a microcosm of the push and pull of Anglo-French relations over the last few centuries (2).

Just how popular Stratford’s favourite son has become in France is demonstrated by the fact that there is a Société Française Shakespeare and that it organises literary congresses on the Bard – in Paris. As advertised by this poster. It’s hard to imagine a reciprocal gathering in London, exploring and celebrating the oeuvre either of Corneille or Racine. 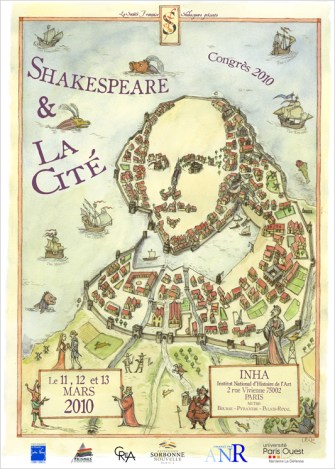 This poster, fusing our classic image of Shakespeare (3) with the conference’s urban theme, presents a map that serves – appropriately – as a trompe-l’oeil: look close, and you’ll only see the houses, streets and squares of a walled Elizabethan port city – let’s call it Shakespeareville – transected by a busy harbour. Bucolic touches liven up the countryside around the city: little green clouds for trees, crosses for windmills, a leaping hare, a rider on horseback approaching the city. The sea is dotted with ships and sea monsters (4).

Pull back a little bit, and the two playhouses in Shakespeareville’s north side – round like the Globe itself – transform into eyes; the rows of houses become his eyebrows, noseridge, beard, hair. The very north is an exposed stretch of beach, reflecting Shakespeare’s own bald patch. The city’s harbour is the poet’s collar.

A whole city arranged to reflect the facial features of a celebrity might seem like something that can happen only in the realm of fiction. Not so: The Argentinian new town of Ciudad Evita, discussed earlier on this blog, was shaped to the likeness of Evita Peron, the siren of Argentine politics (#346). Another example of facial cartography posted about here is also French: #363.

Many thanks to Vincent Mollet for sending in this map. More information on the congres here at he Société Française Shakespeare.

(1) In French, of course: “L’Angleterre est une nation de boutiquiers.” Although he stole the quote from… a Scotsman (Adam Smith, in his Wealth of Nations, but he possibly borrowed it from elsewhere).

(2) As argued in Shakespeare Goes to Paris: How the Bard Conquered France, by John Pemble. Voltaire’s quotes and additional information were taken from the introduction.

(3) The Droeshout engraving on the front page of the First Folio of Shakespeare’s plays.

(4) The map legend ‘Here be monsters’, supposedly attached to a sea infested with imaginary sea creatures, is as much a myth as the monsters themselves.