[Brenda starts to ring up the braunschweiger]

DOROTHY: On a lawnmower?!?!

ALVIN: In Wisconsin. Just over the state line.

[Alvin laughs at this and Crystal smiles, too]

ALVIN: Aren’t those just about the dumbest things you ever saw a person put on their head?

[She nods and laughs]

CRYSTAL: I hear that’s a real party place, Wisconsin. Guess I’ll never get to find out.

The repeated insistence in The Straight Story – the slowest road movie ever – that the great, plain state of Wisconsin is a mecca of mirth seemed like a mere running gag, underlining the orneriness of Iowans. Turns out that director David Lynch might not have been joking after all. It seems those Cheddar Heads really do know a thing or two about partying – especially if it involves hanging out in bars. 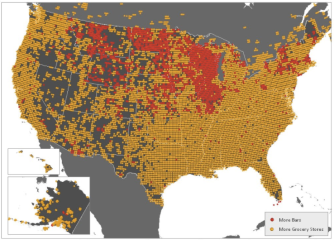 Yellow is generally prevalent in most of the US; one can assume that there are more grocery stores than drinking establishments in those areas. But red dots, where bars outnumber grocery stores, are dominant in a few very particular regions:

This strange map was produced by Floating Sheep, a website dedicated to “mapping and analyzing user-generated Google Map placemarks”. In this instance, the ovine analysts of cybergeography were so startled by this remarkably differentiated result that they wanted to check it against information a bit more official than the data provided by Google Maps.

Many thanks to all who sent in this map: James Smith, Dan Boucher, Ted B. Gerstein, Mark Hamlin, J.P. Coughlin, Pepijn Hendriks and Matthew Zook (of Floating Sheep; this map on this page of their site. Do check out the rest of the site for more interesting statistical maps).

The science fiction dream of a traversable wormhole is no closer to reality, despite a quantum computer’s suggestive simulation.
Up Next
Strange Maps