Where we are determines who we are - and what we drink 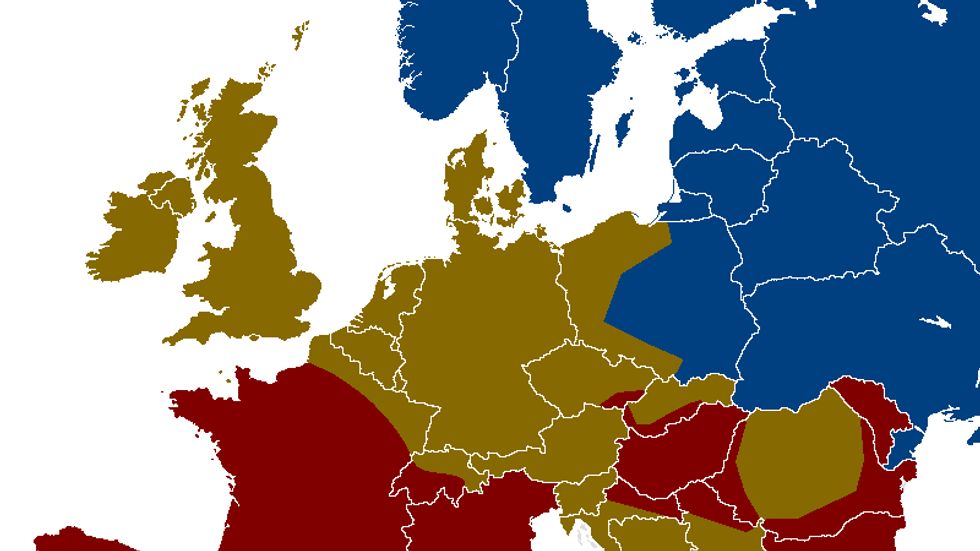 It matters where we are, for it helps determine who we are. Or, as the quote often attributed to Napoleon states: Geography is destiny. That destiny extends to drink, as demonstrated by this map. Where we are determines to a statistically significant degree what kind of alcohol we prefer. Or is it the other way around: the kind of alcohol preferred is determined by the place where it is produced?

This map shows Europe dominated by three so-called ‘alcohol belts’, the northernmost one for distilled spirits, a middle one for beer and the southernmost one for wine. Each one’s existence and extension is determined by a mix of culture and agriculture.

The Wine Belt covers the southern parts of Europe, where wine has historically been an important industry and an everyday commodity: the whole of Portugal, Spain, Italy, Montenegro, Greece, Macedonia, Bulgaria, Hungary, Moldova and Georgia; all but the northwestern zone of France; and significant parts of Switzerland, the Czech Republic, Slovakia, Croatia, Serbia, and Romania.

Either through effects of climate change or renewed viticultural enthusiasm, grapes and wine-making have in recent years been introduced in areas to the north of the traditional Wine Belt, in southern Britain and the Low Countries, creating an overlap between Wine and Beer Belts. That overlap is often ancient rather than recent; the introduction not rarely is a reintroduction. And indeed, southwestern Germany, for example, has an ancient and unbroken tradition of wine-making.

The Beer Belt comprises areas where beer has been the alcoholic beverage of choice since times immemorial: Ireland and the UK, the Low Countries, Denmark, Germany, Austria, Slovenia, Bosnia and Albania; most of the Czech Republic, Slovakia, Croatia, Serbia and Romania; and significant, western parts of Poland. Beer production requires the cultivation of cereals, so this is a climatic-agricultural precondition for the Beer Belt.

An interesting co-explanation for the prevalence of beer in southern parts of this belt is the relatively weak cultural influence of the Roman Empire on these places. The Wine Belt indeed conforms to a large extent with the territory formerly occupied by Rome, with notable exceptions in areas with large Slavic or Germanic migration (the Balkans, southwestern Germany, northern France respectively), where beer predominates (although often overlapping with wine).

The Vodka Belt occupies what’s left of Europe, to the east and north: Scandinavia (except Denmark), Russia, the Baltics, Belarus, Ukraine and central and eastern Poland. There is a climatological imperative to the Vodka Belt: freezing temperatures make grape cultivation impossible (except in southernmost Russia and some areas of Ukraine). So there’s almost no overlap possible between the Vodka and Wine Belts. For cultural reasons, however, the Vodka Belt has been losing ground to the Beer Belt. Scandinavians tend to drink more beer than before (although possibly this doesn’t mean they drink less wodka). Maybe this is due to the perception of beer correlating more with ‘core European’ behaviour (as it is the preferred alcoholic beverage of Britain, Germany and other influential and centrally positioned countries). That might explain the emergence in Poland, some years ago, of a Beer-Lovers’ Party (which actually won seats in the Polish Parliament in the early 1990s). Beer has since surpassed wodka as the most consumed type of alcohol in Poland.

Many thanks for this map (found here) to Leszek Jan Lipinski, who is Polish, studies in Denmark and currently resides in Liechtenstein, and therefore can “confirm from everyday practice that the theory [of alcohol belts] seems quite relevant, not in terms of concrete consumption numbers (Poles currently have 4th highest beer consumption per capita), but in terms of cultural reverence, drinking patterns, festivities and role of pubs in the culture,” even though this map might not be entirely accurate: “[The] Balkan area division is highly disputable and Western Poland does not have the beer culture inherited from the Germans.”

These maps bring to mind Terry Pratchett’s witty remark that Geography is just physics slowed down, with a couple of trees stuck in it. And grapes, grain and potatoes.