Scattered across the centre of San Francisco are almost seventy semi-secret spaces, privately owned but open to the public. Subject to the fine print of a little-known pact between City and Commerce, these so-called POPOS (Privately Owned Public Open Spaces) allow alluring vistas of San Francisco and access to its intimate interiors. However, they are often poorly indicated – perhaps a deliberate tactic by the private companies who own the spaces to prevent the pesky public from using them. Accessing POPOS sometimes even requires walking past security guards, or through unmarked doors. No wonder many are underfrequented.

A concerted effort of concerned citizens – and this map produced by them – is aimed at raising awareness of the existence of these fascinating spaces, 68 in all, both north and south of Market Street, many in existence for decades. This map is part of a guide produced by SPUR (San Francisco Planning & Urban Research Association); the 45 round indicators are POPOS set up between 1959 and 1985, the squares mark the 23 inaugurated after the 1985 Downtown Plan, which stipulated the zoning regulations requiring commercial urban development to be counterbalanced by POPOS.

POPOS come in many guises. They can be either indoor or outdoor – and indeed even on rooftops. They might be the size of a small park, or merely a ‘snippet’. There are single-area POPOS, and ones composed of several different spaces. Some are open at all times, others accessible only during office hours. Quite a few are graced with public works or art. POPOS operated under the Downtown Plan need to provide access to restrooms and other amenities. 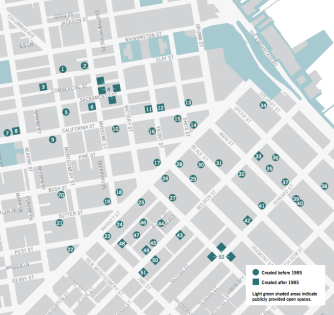 SPUR lists all 68 POPOS in downtown San Francisco and rates them from poor over good to fair and excellent. For a complete overview, download SPUR’s guide (see below). Or take one of the architectural tours leading you through the network of POPOS in San Francisco’s downtown. Below is a brief legend to the map above.

An exhaustive treatment of POPOS history and regulations here at SPUR, which also produced an 8-page guide to San Francisco’s POPOS (including this map) called Secrets of San Francisco. The guide elaborates on the accessibility and overall quality of all POPOS (or rather it would, if it didn’t stop abruptly at page 8, and #45). Even more information on POPOS here at sf.streetsblog.org.