How to Fit the Entire Solar System into Maine

The Maine Solar System Model recreates the relative distances between the sun and planets along a stretch of U.S. Highway 1 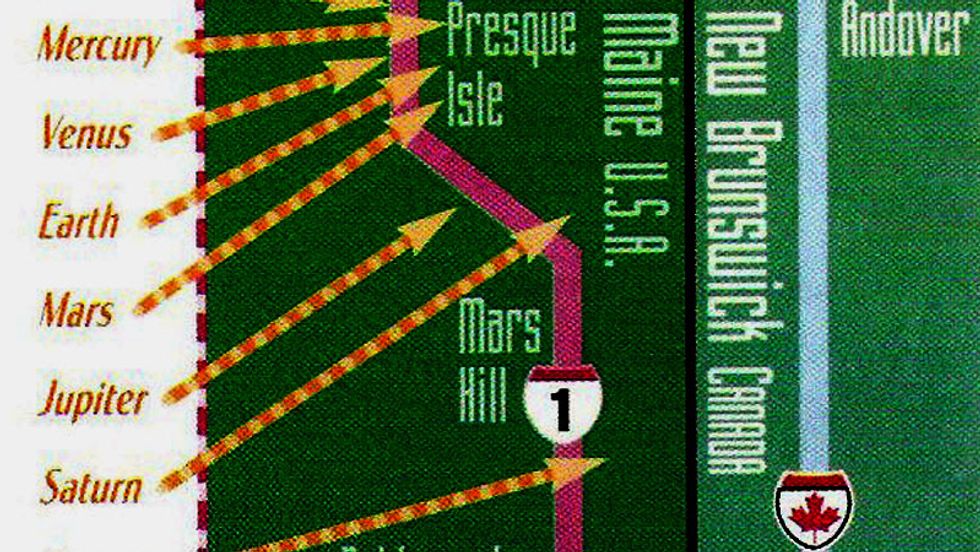 Crossing the bridge over the Saint John River from Clair (New Brunswick) into Fort Kent (Maine), you arrive at the northern terminus of US Route 1. Its number reflects the fact that it is the easternmost of the north-south highways that were standardised in the mid-1920s (1). It is not the longest (2), although its southern terminus is at a stone’s throw from Havana, under the palm trees of Key West, a world away from the snows of Canada. Neither is it the most famous – that laurel goes to Route 66, connecting Chicago to Los Angeles.

But if US Route 66 is the Mother Road, then US Route 1 is America’s Main Street. US 1 runs through Boston, Philadelphia, New York and Washington DC, a few blocks from the White House. It skirts battlefields from the Revolutionary and Civil Wars. Large parts of it consist of shopping centres, strip malls and other sprawl, but it also runs through swamps, wilderness and forests. One of US 1′s longest rural stretches is in northern Maine, where it hugs the Canadian border east to Van Buren and then south to Eastport, before turning west to follow the coast until crossing over into New Hampshire.

Where the sparse, rolling landscape of northern Maine can get a bit monotonous, some relief is provided by the Maine Solar System Model (MSSM). The MSSM, constructed in 2000 by the University of Maine at Presque Isle (UMPI), is the fourth-largest solar system model in the world (3). It is centred at UMPI’s Folsom Hall, which houses the Northern Maine Museum of Science. The scale is 1 to 93 million, which means that one Astronomical Unit (AU) equals one mile (1.6 km). All of our system’s planets are located along US Route 1, in order to present drivers with the opportunity to get a feeling of the scale of our solar system. Its original length was about 40 miles (64 km), all the way to Pluto, at the Tourist Information Centre in Houlton.

Pluto has, of course, ceased to be a member of the planetary club. At a meeting in 2006, the International Astronomical Union decided to downgrade its status. It is no longer the smallest of the ‘regular’ planets, but the second-largest of the dwarf planets. The reclassification was necessary to avoid swelling the ranks of ‘regular’ planets with continuously discovered objects in the Kuiper belt, beyond Pluto.

Case in point is Eris, discovered in 2005, and 27% more massive than Pluto. Rather than elevating it to the status of planet, the choice was made to place it and Pluto together in a new category of dwarf planets. With its moon Dysnomia, Eris, at 96.7 AU from the Sun, is the most distant know natural object in the solar system – so far.

Rather than remove Pluto from the MSSM, the people at UMPI have chosen a more inclusive approach to the changed circumstances. Pluto stayed, and Eris was added, 54.5 miles south of Pluto, near Topsfield. The MSSM’s job is to place these distances in perspective, but the mind can’t help but be dazzled by the dimensions of the solar system, even if it is reduced to fit into Maine. For example: relative to the scale of the MSSM, light would travel at a speed of 7 mph (11.2 km/h). And the nearest star would still be 250,000 miles (402,336 km) away. That’s just over 100 times the entire length of US Route 1, and roughly the real distance from the Earth to the Moon.

This map was taken here at Astroguyz, a website dedicated to all things astronomical. A (dormant) website for the Maine Solar System Model can be found here on the website for the University of Maine at Presque Isle.

(1) US Highway 2, for example, runs from Houlton (Maine) to Everett (Washington), from east to west – albeit interrupted by a large slice of southern Canada.

(3) according to Wikipedia. Although that also hinges on the definition of ‘planet’ – the Scottish Solar System lacks Pluto, for example.

(4) Jupiter has over 60 moons, some of them quite small. Represented here are the four largest ones, also called ‘Galilean’ moons: Io, Europa, Callisto and Ganymede.