There are over 13,000 McDonald’s restaurants in the US, or about 1 for every 23,000 Americans. But even market penetration this advanced doesn’t mean that McDonald’s is everywhere. Somewhere in South Dakota is the McFarthest Spot, the place in the US geographically most removed from the nearest McD’s (*). If you started out from this location, a few miles north of State Highway 20 (which runs latitudinally between Highways 73 in the west and 65 in the east), you’d have to drive 145 miles to get your Big Mac (if you could fly, however, it’d be only 107 miles).

This map is the brainchild of Stephen Von Worley, who got to thinking about the strip malls sprawling out along I-5 in California’s ever less rural Central Valley: “Just how far can you get from generic convenience? And how would you figure that out?”

His yardstick for that thought experiment would be the ubiquitous Golden Arches of McDonald’s – still the world’s largest hamburger chain, and to cite Von Worley, the “inaugural megacorporate colonizer of small towns nationwide.” That’s not the whole story: like other convenience providers aimed at the motorised consumer such as gas stations and motels, McDonald’ses have a notable tendency to occur on highways and, specifically, to cluster at their crossroads. 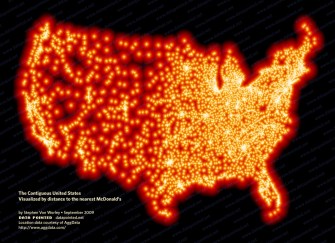 This map moreover demonstrates that the spread of McD’s closely mirrors the population density of the Lower 48, the most notable overall feature of which is the sudden transition, along the Mississippi, of a relatively densely populated eastern half to a markedly less populated western half of the country. Some notable ‘dark spots’ in McDensity east of the Mississippi are the interior of Maine, the Adirondack region of New York state, a large part of West Virginia, and the Everglades area of southern Florida.

Out west, the Arches are fewer and further between, with the exception of the heavily populated coastal areas. To achieve identical density to the rest of the country, this sparsely burgered part of the country would have to be sandwiched between them so that southern California and western Texas would almost touch, and Seattle would be a day’s drive from Minneapolis. The blackest holes in the western McTapestry are the Nevada desert, some mountainous parts of Oregon and Idaho, and the plains of South Dakota – home to the aforementioned McFarthest Spot.

(*) N 45.45955 W 101.91356, to be exact, or if you prefer the poetry of toponymy to the precision of a grid reference: 12.5 km WxNW of Glad Valley, 25 ExSE of Meadow, 31 km N of Iron Lightning and 32 km NxNW of Thunder Butte Creek (all in SD). Note: this McFarthest Spot did not take into account McD’s geographic penetration in Alaska and Hawai’i, and therefore only applies to the 48 contiguous states.

Which TV Shows Aliens May Be Watching

If extraterrestrials were monitoring American television, here’s what they would be watching. In the Fomalhaut system, for example, maybe everybody’s crazy about Miami Vice.