When the New York State pavilion was inaugurated at the 1964 World’s Fair in Queens, the floor of its Tent of Tomorrow was the largest map in the world. The 130-by-166-foot plot of polished terrazzo tiling was a massively enlarged facsimile of a Rand McNally road map, and covered the Empire State in its entirety, from the eastern tip of Long Island to the top of Barnhart Island, the state’s northernmost point. 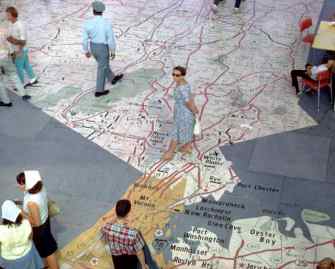 There was talk of moving the map downtown after the Fair, to serve as the floor of the World Trade Center. But that didn’t come to pass. Instead, the map stayed put, and decades of neglect and wear and tear by the elements took their toll on the plywood tiles. Had it survived, the half-acre-sized map would still be the world’s largest single cartographic image.

The New York State map, sponsored by Texaco, was one of the eye-catchers at the World’s Fair. The elliptical Tent of Tomorrow was covered by the largest cable suspension roof in the world. After the Fair, it was turned into a concert venue, which by the late Sixties had fallen into disrepair. In the early Seventies, the plywood tiles were covered with a layer of polyurethane, and the area was re-purposed as a skating rink.

At present, the construction is a disused part of the Flushing Meadows-Corona Park in Queens. The cable suspension roof is long gone, its sixteen pillars supporting nothing more than the sky, as a reinforced-concrete retelling of the poem about Ozymandias. The only part of the New York State contribution to the Fair to survive unscathed is the Queens Theater in the Park, once the pavilion’s Theaterama.

As dictated by the recurring irony of heritage conservation, the map wasn’t deemed of value until it was nearly gone. Only in 2008, in an article on a rescue attempt of this “valuable artifact”, did the New York Timeslaud it as “an exuberantly overstated mix of small-town parochialism, space-age optimism and Pop Art irony”. 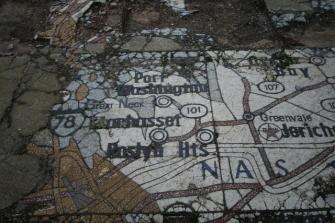 The paper reported how a team of the University of Pennsylvania’s graduate programme in historic preservation had been trialling the preservation of four of the 567 4×4-foot panels that make up the map. They were replacing missing letters, numerals and symbols on the original map. It was estimated that conservation would cost about $1,100 per panel, bringing the total cost up to $623,700.

However, no plans were made beyond the trial conservation. There is no info on the current status of the project. An aerial shot of the site on Google Maps reveals, in a shape vaguely corresponding with that of New York State, the absence of a map rather than its preserved presence. Sad!

Many thanks to Chris Perriman, who sent in a link to Tent of Tomorrow, a now defunct website dedicated to the eponymous construction, and the 1964 World’s Fair in general.